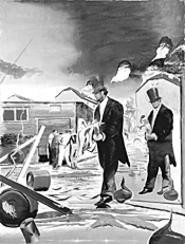 From Leipzig -- The seven young artists here are all representational painters associated with the Leipzig Academy of Visual Arts, yet there is tremendous variety among the show's seven paintings, covering a wide palette of styles and subjects. Martin Kobe and David Schnell are fascinated with perspective: In Schnell's acrylic, "Stangen im Mai," a grid thickly populated with trees and other vertical objects extends beyond sight in every direction; Kobe's untitled acrylic resembles a surrealistic architectural design, in which the walls, floors, furniture, and blank space have been dipped in red and stretched to infinity. A surrealism more versed in the tradition of Magritte reigns in "Automat," Matthias Weischer's four-panel oil on canvas: Here, a peculiar object -- a cross between a bed and a pinball machine -- stands like a shrine inside a ruined open-air temple that no one ever visits. It's strange and compelling in its odd stillness. German political and industrial history is the subject of "Prozession," the oil-on-paper narrative-style painting by Neo Rauch, who at 44 is the oldest artist in the show. An atmosphere of decay pervades the unusual composition: Giant men in top hats hold small men in their hands like slaves, while others trudge into a factory that's billowing smoke into an already darkened sky; the impression is of a bleak labor sector in which the workers hold little power. With only one work from each artist and all displayed in a single gallery, From Leipzig whets the appetite for more from each. Through May 1 at the Cleveland Museum of Art, 11150 East Blvd., 216-421-7340. -- Zachary Lewis

Pulse: Energy Forms/Jim Hodges -- In Pulse: Energy Forms, Icelandic artist Hildur Ásgeirsdóttir Jónsson uses silk, a thin and delicate material, to convey wide-open spaces and nature's most violent physical processes. Stars explode, radiating waves of light, all within the confines of painstakingly stitched six-inch-square panels. Intricate black squiggles densely packed on vellum outline the movement of tectonic plates, perhaps mapping the progress of an earthquake. Applying fabric dye to larger panels of woven silk in the compositions called "Glacier Tongue" and "Floating Iceberg," Jónsson suggests the grandeur of a fog-enshrouded valley or the towering immensity of the arctic icepack with breathtaking likeness. These powerful images cannot soon be forgotten. Jim Hodges, featured in MOCA's other new exhibit, also uses nontraditional materials, but to different ends and with more mixed results. His drawings, mirror paintings, and other sculptures realize complex mathematical, scientific, and self-reflective psychological concepts in beautiful ways, yet his wacky, multicolored light-bulb constructions are frustratingly abstract. "On We Go," a silver-chain spiderweb hung across a corner, gets darker near its origin and looks as if it could replicate itself forever. In an untitled picture, Hodges deftly cuts out portions of a large photograph, causing the leaves of a sun-dappled tree to appear to undulate in the wind or fall softly to the ground. It is the artist's most recently completed work and also his most stunning. Through May 1 at the Museum of Contemporary Art Cleveland, 8501 Carnegie Ave., 216-421-8671. -- Lewis

Luc Delahaye Photographs: History -- French photographer Luc Delahaye's 4-foot-by-8-foot images are narratives -- sometimes direct, sometimes subtle -- of world events. "Taliban," from 2001, shows the corpse of a man crumpled on a dusty road. His clothing blends with the rocks and fallen leaves around him; the only contrast of colors within the image is the brilliant red slash across his neck. "The Milosevic Trial," from 2002, is deceptively plain. Without the title, the image might be mistaken for any ordinary government conference room. Delahaye's compositions are often beautiful, even when the subject matter is disturbing. Their large size and wide views make them particularly effective. On view through February 23 at the Cleveland Museum of Art, 11150 East Blvd., 216-421-7340, www.clevelandart.org. -- Tami Miller

MOCA in the Making -- Graduate students in the architecture and environmental design programs at Kent State University were asked to design a dream building for the Museum of Contemporary Art Cleveland as the cultural hub of University Circle. A jury selected the four strongest proposals, and their computed-generated images and models are now on view in MOCA's sky lounge. The ideas are exciting, but the exhibition does not provide enough explanation of the students' decisions. There is also a disconnect between the 2-D designs and 3-D models, due to poor layout. Through February 20 at MOCA Cleveland, 8501 Carnegie Ave., 216-421-8671, www.MOCAcleveland.org. -- Miller

Psychological Expressionism: The Art of Sid Rheuban -- A Cleveland native and retired bond salesman, octogenarian Sid Rheuban has been painting for less than 15 years, yet his work is at a master's level. The title of this large retrospective is right on the money: The emotional lives of the figures he paints -- elderly men, teenagers, variously occupied older women, and a few sardonic self-portraits -- resound across his canvases. Rheuban derives meaning from a wide range of exaggerated physical characteristics, but it's his subjects' eyes, painted disproportionately large and darkly outlined, that often become their most expressive feature. True to the definition of expressionism, the colorful and flat but rather bleak world Rheuban paints around his figures is more an extension of their interior climates than a simple background. Canvas, though, is not necessarily Rheuban's preferred surface; some of his most imaginative work takes place on Plexiglas, which endows the paintings with a lifelike three-dimensional quality and additional warmth. A number of these are suspended mid-gallery from the ceiling, allowing viewers to examine both sides. One, "Prussian Blue," depicts a woman with large, knotted hands. Her outline appears black, until one looks through the paint. Similarly, Rheuban seems to have peered directly into the true nature of each of his subjects, with affection, honesty, humor, and understanding. Through March 11 at the Cleveland State University Art Gallery, 2307 Chester Ave., 216-687-2103, www.csuohio.edu/art/gallery/main.htm. -- Lewis

Stray Shopping Cart Project: Cleveland and Environs -- Julian Montague's one-room installation is admirable for the painstaking effort that went into creating a project of such mammoth, overblown inconsequence. Even more than that, it's laughable. The Buffalo artist has catalogued with absurd precision the various species of forgotten grocery carts that populate the city. Like a sociologist, Montague scoured Cleveland's parking lots looking for poor, neglected carts left out in the cold and documented their descent: from abandonment next to our cars to their near-decomposition or complete transformation. (One especially mangled example inhabits the center of the room.) Most of the display, however, consists of ludicrously complicated flow charts laden with photographs and tiny labels, detailed maps that look like instructional diagrams for a military takeover, and far, far too much text. Each cart is a "specimen," whose unfortunate situation merits thorough examination. Found objects have long been fodder for art, and here Montague takes the practice to the extreme. But beyond the humor and jargon, it's not hard to hear the artist's condemnation of our distracted, materialistic, disposable society. Then again, it's possible that he made up part or all of it, and a deeper meaning simply isn't there. Maybe the joke's on us, for looking. Through March 11 at Spaces, 2220 Superior Viaduct, 216-621-2314. -- Lewis

Topographic -- Explanation for this show's title lies in a statement accompanying a wall drawing by Mark Taylor. "Wild Wonderful," which happens to resemble a gigantic topographic map, consists of "multiple images . . . meant to activate remembered or imagined scenarios." That it certainly does. The statement also applies rather well to the work of the other 10 artists in the show, whose installations and multimedia projects comment -- with varying degrees of success -- on the developed world. Two constructions by Chicago artist Yoshiko Kanai are the most profound items here: Her "Sea of the People" is a small pond inhabited by real goldfish and lined on either side by towers that look like sand castles. Three-dimensional human faces emerge from the water, forming a kind of stepping-stone path from one side to the other. It's a beautiful realization of the notion that only people can heal mankind's divisions. Kanai carries the point further in a similar piece, in which water from the pond drips onto a slowly dissolving landscape made of sugar and dotted with tiny tanks and airplanes. Elsewhere, Neil McDonald's deliberately blurred paintings of sites where planes have crashed transform scenes of tragedy and catastrophic malfunction into strangely pleasant abstract landscapes; also memorable are Mark Slankard's photos of flimsy, barren, cookie-cutter suburban homes under the heading "Curb Appeal." Through March 11 at Spaces, 2220 Superior Viaduct, 216-621-2314. -- Lewis

Visions of Japan: Prints and Paintings From Cleveland Collections -- The Cleveland Museum of Art has accrued an immense stock of Japanese prints, but it has never before mounted a show like "Visions of Japan," which spans the 18th century to modern times. The exhibit runs along a hallway, forming a sort of three-dimensional timeline. At one end is a wealth of early color paintings and woodcuts in the Ukiyo-e tradition: painstakingly detailed and varied landscapes of Mount Fuji, as well as crowd scenes from the city's geisha district and portraits featuring Kabuki actors. Major artists with recognizable styles are represented here, including Hokusai and Hiroshige. Modern Japanese artists reinvigorated the print tradition, using the craft in countless new ways and blending it with Western styles and techniques. Their work forms the show's second and perhaps more impressive half. With so much to see in this section, a few brief highlights must suffice: "Washing Hair," an ink-on-silk drawing of jaw-dropping beauty by Torii Kotondo; a tiny but surprisingly potent mezzotint called "Ball of Yarn" by Yozo Hamaguchi; and Kiyoshi Saito's masterful adaptation of natural wood grain into a picture. A minimalist abstract by Shoichi Ida, in which two ink-blots have soaked from opposite sides into a delicate sheet of paper, may be the most poetic and densely Japanese vision of them all. Through February 20 at the Cleveland Museum of Art, 11150 East Blvd., Cleveland, 216-421-7340, www.clevelandaart.org -- Lewis