On With the Show

De Niro and Murphy play it by the numbers in Showtime, but that's not a bad thing. 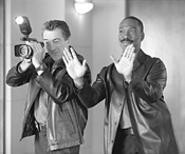 The theme and premise -- the chasm between Hollywood's view of "buddy cops" and the real thing -- would be nothing special, were it not for the film's fortuitous star casting: How bad could a project pairing Robert De Niro and Eddie Murphy be? (Curiously, Will Smith is listed as executive producer, suggesting that he was involved in developing the Murphy role for himself, but then declined to star.)

De Niro plays Mitch Preston, a seriously dedicated -- even dull -- LAPD detective. During an undercover drug bust, his sting is disrupted by grandstanding patrolman Trey Sellars (Murphy), who has spotted Mitch on the street as a shady character, tails him, and inadvertently attracts a throng of TV reporters. In the ensuing chaos, Mitch -- furious at the press crews, whose meddling has endangered his partner's life -- busts up one of the news videocams.

Mitch's behavior becomes front-page news, and a sleazy but clever producer named Chase Renzi (Rene Russo) decides that he would make the perfect star for a buddy-cop reality show (eventually dubbed, as though you hadn't guessed, Showtime). Together with her network, she blackmails the police bureaucracy into allowing this outrageous intrusion into their life-and-death business, in return for dropping legal action against Mitch and the department.

And who is intent on being cast as his buddy? The obnoxious Trey, of course. He is really a struggling actor, who has joined the LAPD to bide his time until stardom, simply because it beats being a waiter.

There aren't a lot of surprises in the rest of the script. Mitch and Trey have to go up against your basic Evil Drug Dealer (Pedro Damian), who is armed with a Super Duper Greatest Automatic Firearm Ever Designed. The buddies will, as the genre demands, get over their differences and reluctantly realize that they have grounds to respect each other. Each will learn lessons from the other.

One aspect of all this that violates the axioms of the Unified Field Theory of Buddy Action/ Comedies is that there is no obligatory and unbelievable romantic subplot, even though Russo initially seems to be there for the purpose of ending up in De Niro's arms. (The same was true in De Niro's first and greatest foray into the genre, the altogether wonderful Midnight Run.) Let it also be said that Showtime breaks another rule: The dynamics of the big climactic set piece actually seem to make sense.

While it would be preferable for films like this to at least try to have scripts that aren't so relentlessly by-the-numbers, it's also no big deal. The action here is in watching De Niro, watching Murphy, and most of all watching the two of them play off each other. Director Tom Dey comes to the project from his first-rate debut with Shanghai Noon, where he guided a similar sort of chemistry between Jackie Chan, all hyperkinetic and earnest, and Owen Wilson, a laid-back con man.

Showtime isn't as altogether successful as Shanghai Noon. Among other things, it doesn't have Chan's amazing physical resources to exploit for both action and comedy. Instead, the action scenes have to rely on big car chases and shootouts that, as usual, are more a tribute to stunt men, demolition experts, and CGI craftsmen than to the performers. Nonetheless, Dey certainly understands how to milk buddy-film tension for all it's worth. Murphy and De Niro individually are always fun to watch; Dey wrings out every laugh inherent in the conflict between Murphy, an actor who's all spontaneity and energy, and De Niro, a master of controlled underplaying.

There is no great ambition here. But -- as Warner's advertising and trailer cutters obviously realize -- it's hard not to warm to a film that features William Shatner (playing himself) looking at De Niro's character and complaining about what a lousy actor he is.