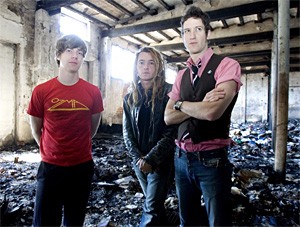 Thanks to some selective nostalgia, the '90s are generally remembered as the Grunge Era. Really, though, the last whiffs of teen spirit were already gone by 1996, leaving four more years of "alt-rock" so faceless and forgettable that it still makes up about 93 percent of the world's used-CD inventory.

It was during that time, in the middle of a herd of Spacehogs, Verve Pipes, and New Radicals, that Nada Surf — a band way too good for its radio neighborhood — emerged with the 1996 smash "Popular." "You could never predict anything like that," says drummer Ira Elliot. "The last thing we expected was to have this radio hit for Elektra Records. It was really pretty bizarre and fantastic."

In the grand scheme of Nada Surf's career, though, "Popular" would prove to be a blessing and a curse. The New York-based trio — Elliot, singer and guitarist Matthew Caws, and bassist Daniel Lorca — hit it big with its appropriately titled debut album High/Low, but when the suits at Elektra frowned on 1998's follow-up CD, The Proximity Effect, Nada Surf was unceremoniously dropped by the label.

For many of the period's one-hit wonders, the story would have ended there. But for Nada Surf, it merely presented a new challenge. Even though the band fell off the radar in the U.S., it remained a big draw overseas. The guys were confident that their homeland would embrace them once again. In 2002, Elliot, Caws, and Lorca reconvened to record their third album, Let Go, and found a much more amiable partnership with the hipster-approved indie label Barsuk.

When Let Go was released, seemingly out of left field, it was hailed as a genuine pop classic, and Nada Surf was suddenly transformed from '90s afterthought to contemporary indie-rock heroes. "To have the early success and then to rise from the ashes, in a manner of speaking — I'd say we're all very proud with the arch of our career," says Elliot. "It's really improbable. But it's nice to know that good songwriting will always find fans over time. I think that's why we're in the position we're in."

Yet Elliot says the band still carries around that underdog attraction, especially to the legion of faithful listeners who've stuck it out over the past decade. Never mind that Nada Surf released two more acclaimed records that have been heard by lots of folks: 2005's The Weight Is a Gift and its latest album, Lucky, which may or may not be aptly titled.

"Deciding on the name of this record actually turned into one of the biggest internal fights we've ever had," laughs Elliot. "Just because the word lucky can be interpreted in so many different ways. You could say there's no such thing as luck where there's perseverance."

"Our last few records go together almost like a trilogy," says Elliot. "They're not wildly different at all. For some people, that would be a negative. But for us, it's a plus. We haven't gone out of our way to experiment with incredibly weird production or anything like that. We've just recorded our songs the way they sound right to us. I think, when you're emotionally open and honest in your music, people will identify with it."

And it doesn't get much more candid than in Lucky's leadoff track, "See These Bones," which doubles as a cautionary tale for up-and-coming artists. "Look alive, see these bones," sings Caws. "What you are now, we were once."

"Occasionally, young bands will approach us looking for advice," says Elliot. "Usually there's no answer you can give. I try to put myself in their position: What if the three of us were starting out today? How far would we get? The odds always seem astronomical, and with MySpace and things like that, it's hard to tell if it actually makes it easier or harder. So there's not much advice we can give aside from Watch your ass, and try to have fun."

It's safe to assume that Elliot and his bandmates have shared this wisdom with their friends in Death Cab for Cutie, a former Barsuk group that recently had a No. 1 album on Atlantic Records. "We were actually on the road with Death Cab at the time that they were starting to take meetings with major labels," says Elliot. "And we realized that we were on sort of opposite career paths. We were the older guys who had been on Elektra, and here were these kids, who had only been on indie labels and now were getting bigger and bigger. So when they were taking meetings with Atlantic and Elektra in New York, we were happy to hear these stories. We thought it was hysterical that they were meeting with the same people we'd been dealing with just a few years previous."

So far, Death Cab's major-label experience has been much smoother than Nada Surf's. But Death Cab also had the benefit of swimming in friendlier indie waters for many years before jumping into the big sea. For Nada Surf, success meant leaving a major label for an indie — the opposite of selling out, in a way.

Still, you have to wonder: If a major label came calling again, what would the older, wiser Nada Surf say? "It would have to be a deal so ridiculously in our favor," says Elliot. "But we'd love for someone to come up to us and be like, 'Hey, we here at Polyglot Records would love to have you, Nada Surf, you rock hipsters of the highest order. Come back to our major label!' It would be really funny to hear that pitch."