Local artists come together to share their passion for reggae. 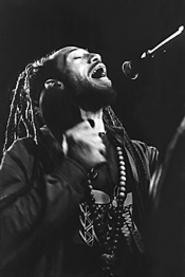 It's Friday night, and the 2,000 miles that separate Peabody's from the Blue Mountains of Jamaica have gone up in a puff of curious-smelling smoke. The spindly, dreadlocked Carlos Jones is onstage, pounding out a steady rhythm on a large African tom-tom. His eyes are shut. He never once opens them as he plays. It's as if, in keeping them closed, he's somehow pulling the blinds on all of life's bothers for an hour. Similarly, the roots reggae he fills the room with is all about momentarily leaving one's tribulations in the dark. "Forget your worries and dance, forget your troubles and dance," he enjoins between songs.

The good-sized crowd does just that. A burly construction worker-type in big boots sways next to a robust African woman in a daishiki. College kids down brews across from grandfolk.

"I love it when that happens, when you come to a show and see all different ages," Jones says the following week, in his home studio in Woodmere, which could pass for a shrine to Bob Marley. "Race, religious beliefs -- all that gets left outside the door. Everyone knows that we're there for one reason: to feel nice. All the barriers just drop."

"You come down to a reggae concert and it's just a natural mix of a lot of people," says Packy Malley, Cleveland's leading reggae promoter and the man behind Saturday's Christmas Reggae Festival at Peabody's. "It's an environment that really nurtures positive vibrations and peace. You walk out of there and you feel like it was uplifting in some way."

And that's a feeling that more and more locals are experiencing of late. After a decade-long fertile period beginning in the early '80s, when bands like First Light and Satta regularly drew crowds of 300-plus two and three nights a week, the Cleveland reggae scene began to peter out in the mid-'90s. But now, local reggae is slowly reasserting itself, by way of a thriving underground network of East Side clubs like the Big Family Lounge and the Cascade Club. In addition, there's a strong presence on Cleveland college radio, where the amount of reggae programming rivals that of most any city in the nation.

"Here in town, it's a subculture that's very, very viable and vital," says Charleston Okafor, program director for WCSB and host of his own reggae show. "It's all about one common denominator, and that's that we're all human. We're social beings, and reggae music plays into that well, with its 'one love' message."

Larry Koval, who heads local reggae label Little Fish Records and also manages Carlos Jones, adds, "I was able to do quite a bit [of booking] this summer, and to my count, there was something like 30 or 40 clubs in the Cleveland/Akron area that were either having reggae bands or reggae DJs. It just blew me away."

But reggae's popularity in Cleveland really shouldn't come as much of a surprise. After all, the music was born in the same working-class environment that characterizes much of this town. It descended from a type of loose, early-20th-century folk music called "mento," created by oppressed Jamaican field workers. Consequently, since reggae's inception, the art form has been among the most proletarian of all musics and a real political force in its homeland. Eventually, reggae made its way to America, and a small scene was first established by Jamaican immigrants, who planted the seeds for the music in the form of social clubs and makeshift dance halls in the '60s and '70s. These were places where Jamaican culture thrived. Places where toasting would come to mean more than raising one's glass in cheers. Places like Dailey's Blue Mountain Lounge.

Tucked away in Cleveland's far East Side, Dailey's is a Jamaican grocery store/club where patrons can buy giant stalks of sugarcane in the front or have their teeth rattled by a mammoth sound system in the back. Since Dailey's inception in 1979, the club has served as the epicenter for authentic reggae and given local notables like Kaya and Black Lion their start. The latter was the first group ever to play the club some 22 years ago.

"People were ready for it," former Black Lion bassist Ras Paul says of reggae's emergence in Cleveland. He's sitting in the basement of his home, ripe with the aroma of ganja, only 12 blocks from Dailey's. "Back then, the fire was real, brotha; even if there was only 30 people in the crowd, they were into it. People was really trying to play the music from the heart. If you're doing it from the heart, people will feel it."

And they did. Soon, there was a flurry of players in the burgeoning Cleveland scene, headed by bands like I-Tal and Jah Messenger. But while these acts may have laid the foundation for a strong local reggae community, their descendants haven't been so successful in continuing to build upon the base.

"These days in Cleveland, you have lots and lots of singers, but their bands just kind of rotate through musicians, so there's very few bands that really get the time to mature together, where the musicians really, really click," says Tommy Fox, former drummer for the now-defunct Riddim Fish and host of a reggae show on WCSB. "These days, it's just fragmented."

It's this fractured nature of Cleveland reggae that has, more than anything else, stunted its development in recent years. The Christmas Reggae Festival is the musicians' effort to combat that division.

"I thought for this show, it'd be a fun idea if we got all the reggae talent in Cleveland to come together, because all the entertainers compete with each other somewhat -- that's what makes them better -- and I thought if we all came together in unity, it'd be a lot of fun," Malley says. "It's just going to be kind of a feel-good vibe for the reggae community in Cleveland."

And the public could use it. As a black cloud hangs over the country in the wake of recent events, now more than ever does reggae, and the spirit of fellowship that defines it, have real utility.

"I really believe that reggae music is a strong force of nature," Jones says. "It came up out of a time where a people were struggling with real issues of survival and freedom. It's a revolutionary music, and it's a form that carries truth, enlightenment, and a vibration that gets inside your spirit.

"When they say, 'one love,' that means no separation between each other. That's what we all should strive for," he says. Eyes wide open.