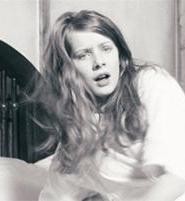 In 1817, a Tennessee landowner named John Bell was startled by a bizarre creature, described as a dog with a rabbit's head, which materialized in a cornfield and vanished when fired upon. That night, an unexplained pounding shook the walls of the Bell home. Over the next four years, these oddities escalated into terrors, from audible threats overheard by neighbors to physical beatings. Witnesses saw the Bells' youngest daughter, Betsy, slapped and dragged by the hair by an unseen force, which terrorized her for years.

Clearly, this is a story that demands embellishment. Or so believe the makers of An American Haunting, who have taken a tantalizing footnote from the old weird America -- a ghost story fascinating precisely for its grounding in historical record -- and reduced it to another tame, lame serving of PG-13 shocks.

Historians and novelists have spent nearly two centuries sorting through (and adding to) the thicket of speculation surrounding the events that drove John Bell to his grave in 1820. Various nonfiction accounts say the spirit known as the Bell Witch spoke, even delivered prophecy; it reportedly produced hazelnuts from thin air for the ailing Mrs. Bell, yet cackled audibly as her husband was being buried. One oft-repeated version has General Andrew Jackson himself visiting the Bell farm, only to beat a retreat after the spirit ass-whupped his "witch tamer."

Whether these legends are true is almost beside the point. "When the legend becomes fact, print the legend," ran John Ford's credo in The Man Who Shot Liberty Valance, and regardless of the fact that Ford's film printed both side by side, that remains the movies' primary approach to history. A good story trumps all. What's most interesting about the Bell Witch story, though, is its suggestion that the superstition and fundamentalism of rural 19th-century America may have concealed -- or even beckoned -- real demons. Was it an apparition? A collective hallucination, brought on by religious hysteria? A moral reckoning on John Bell's slaveholding?

Alas, the real demon, in Courtney Solomon's plodding retelling, is a hyperactive shakycam leased from Sam Raimi's Evil Dead pictures. The movie opens in mid-jiggle, chasing a girl through a forest toward her contemporary home; this modern-day framing device would be the funniest thing in Scary Movie 4, with its deafening fake scares and dream-sequence gotchas! The girl's mother opens an ancient missive from the afflicted clan's matriarch, Lucy Bell (Sissy Spacek), whose voiceover lays out the supernatural saga.

At this point, the action shifts to a strangely Carpathian Tennessee -- actually cheapo location-of-choice Romania, which basically exists now as the Sci-Fi Channel's backlot -- and the movie briefly gains some atmosphere and tension, as the haughty elder Bell (Donald Sutherland) faces a church tribunal over his loan-sharking to batty Kate Batts (Gaye Brown). The church sanctions him, which is bad; scary Kate curses him and his comely teenage daughter, Betsy (Rachel Hurd-Wood), which is worse. Bell laughs off the affront -- at least until a snarling wolf leaps out of nowhere and unleashes a 150-decibel bark in Dolby 5.1.

Is this kind of blast-in-the face scare effective? Sure. You will also throw your beer in the air at a football game, if the jackass behind you blows his airhorn. But it only works once, and Solomon -- whose previous credit was Dungeons & Dragons, a film as exciting to watch as a role-playing game -- is the kind of chef who'd pour celery salt on celery. With the late cinematographer Adrian Biddle, he does create some genuinely moody Hammer-horror atmospherics using shadows, candlelight, and darkened woods -- a reminder that insinuation is still cinema's most potent scare tactic.

But when it comes to the kind of blatant shocks favored by mallrats, the limits of Solomon's toolbox become painfully apparent. Granted, the Bell Witch's attacks ground on over a period of years, but the movie exhausts its scare scenes through repetition. One amped-to-11 wolf is hair-raising, but half a dozen warrant a call to Animal Control; one point-of-view shot creeping up some stairs repeats often enough to merit a drinking game. The overused camera swoops and digitally accelerated sweeps across the countryside shatter any illusion of 19th-century life. You might as well be watching Boogeyman with muskets. The movie's eeriest moment is one of its simplest, after the witch's most intense attack: Spacek's wraithlike stare as she cradles her daughter, amid a snowfall of goose down from the girl's shredded pillow.

The biggest cheat is an ending that imposes a 20th-century psychological explanation -- lifted from Brent Monahan's source novel -- on the Bell Witch legend. The clumsy, almost furtive twist raises the suggestion that John Bell deserved what he got, but Sutherland's performance lacks the arrogance or even villainy that would give the revelation impact. Yet buried in the cheap, crude closing stinger that caps An American Haunting is a grimly resonant idea, one that even the Bell Witch might second: that supposedly happy homes often hide horrors worse than witches.