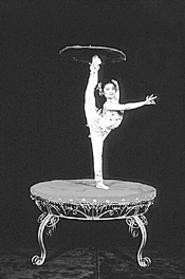 Don Hughes has been producing Chinese acrobatic shows for more than three decades, but he still wrings a handkerchief when his performers do handstands on top of a 26-foot "pagoda of chairs." "My palms still sweat," admits Hughes, co-creator of Stars of the Peking Acrobats, a 14-member circus troupe that springs into town on Sunday. "They get on top of those chairs, and they look down on you, and they're smiling. That's an ooh-and-ahh act."

It's no big deal to the acrobats, who range in age from 18 to 24. Since they were in elementary school, they've perfected their daring feats of skill. For more than 2,000 years in China's regimented educational system -- where students go to class six days a week for nearly 12 hours a day -- aspiring tumblers have spent at least four hours a day in acrobatics, gymnastics, and calisthenics training.

"If you watch the discipline in these rehearsals, it's fabulous," Hughes says. "[But] they're not pushing them to the nth degree, [till] they're exhausted. They make these rehearsals fun, make a game out of it. It's almost like a sport."

Even for infants. Newborns are gradually introduced to the stunts by their parents. And Hughes has seen it firsthand from his troupe. "You go backstage, and there are these babies being tossed around from one person to another, and the babies love it," exclaims the South African-born Hughes. "They have no fear whatsoever and think, If Mummy can do it, so can I."

Hang on there. While audiences gasp at the acrobats scaling towers of chairs, steadying lighted candelabra on their bodies, and juggling knives, bats, and other household objects, Hughes warns spectators with a familiar disclaimer. "You'll come out of the theater and see the audience doing cartwheels in the parking lot or balancing themselves on a bench in the park," he says. "But tell your children not to do this at home."