Our picks for the film version of Operation: Mindcrime. 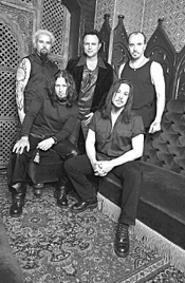 Queensrÿche's recorded output has disappointed fans for 10 years -- arguably longer. Live, the group's greatest-hits fodder has still sounded strong, but selections from Q2K (lame, as the title suggests) and 2003's Tribe (a suck-saturated snoozer) diluted the setlists. Mercifully, none of this matters anymore, because the Seattle-based prog-metal outfit's current concerts include an expansive recreation of 1988's Operation: Mindcrime, a career-justifying effort that remains one of hard rock's most compelling concept albums.

Musically, Mindcrime is ambitious without becoming bombastic. The band separates its radio-ready standouts ("I Don't Believe in Love" and "Eyes of a Stranger") with a pensive instrumental and an expository mini-monologue, but the sequencing works, because the tracks share ominously lingering guitar leads and bracing drum thumps. Even the climactic "Suite Sister Mary," in which characters exchange call-and-response dialogue, justifies its 10-minute running time.

The stage show, which the group resurrected last fall after a 13-year hiatus, alternates between live actors and video footage, such as a clip in which Nikki lights a candle for every political or religious leader he's killed, and ends up surrounded by flickering flames. At the end of the night, a visually enhanced, one-song encore previews 2005's most surprising sequel this side of Miss Congeniality 2: Armed and Fabulous.

"Operation: Mindcrime 2 [due out late this year] was definitely the result of the political climate," singer Geoff Tate says, adding that he was also inspired while scribbling notes for a possible screen treatment of the original album. "I'm not familiar with movies these days," he admits. "All I know is Brad Pitt and Tom Cruise, and they're too old for Nikki." To help the project along, cinema-savvy Scene volunteered to cast his characters.

Nikki: "For a price, I'd do anything, except pull the trigger/For that I'd need a pretty good cause," Nikki explains in the album's opening lines. In his eyes, Dr. X's agenda, which involves the abolition of the government, media, and organized religion, qualifies as a crusade that justifies murder. Just to be sure, though, Dr. X brainwashes him, feeding Nikki a Manchurian Candidate-style password ("mindcrime") that ensures guilt-free hits. Although he eventually becomes a swaggering gunman, declaring himself "the new messiah" and "a death angel," Nikki maintains a sense of vulnerability that's detached from the violence.

"Nikki comes from a broken home," Tate says. "He's looking for a family. It's easy to suck kids like that into cults. He's not the type of person who would normally kill someone. He's programmed. I see him as an innocent at the beginning of the story."

Casting choices: The troubled and stubbled ne'er-do-well Colin Farrell; Mindcrime-era TV icon Luke Perry, who nailed teenage rebellion at age 27 and could surely still pull it off at 39.

Dr. X: A sympathetic interpretation paints him as a well-intentioned idealist gone power-mad, like Ralph Nader. However, Tate had someone else in mind. "Dr. X was inspired by a man I met in Montreal," he says. "He led a radical French separatist group that blew up cars, leveled buildings, and took hostages, all in the name of getting Quebec to secede from Canada. He was the coldest, most ruthless person I've ever been around.

"X is very convinced that his way is the right way and that he's got it figured out," Tate says. "He's without humility." It's a characterization with obvious contemporary political parallels.

Casting choices: Chris Cooper, reprising his deft Dubya-aping role in Silver City; Malcolm McDowell, who played the ultimate madman in Caligula and whose age-ravaged features have only sharpened his super-villain scowl.

Mary: At 16, this runaway worked the streets in pre-sanitation Times Square: "25 bucks a fuck/And John's a happy man/She wipes the filth away." A priest named Father William "rescues" her, converting her into a nun whom he "takes once a week on the altar, like a sacrifice." Mary also becomes a covert X agent, comforting Nikki in an effort to prevent his brutal occupation from driving him insane. She does her job a little too well: Though Nikki calls her "the lady that will ease my sorrow," he soon falls in love with her, compromising the mission and leading X to make her his next assignment. He gets to know her in a biblical sense instead, slaughtering Father William as foreplay.

During the sex scene, Mary sees flashes of Father William on top of her. Repulsed, she imagines Nikki being just like all the abusive assholes in her past and becomes despondent. When he returns, she's dead, hanging from her rosary.

Queensrÿche fans have conjured several scenarios: Mary committed suicide, X strangled her, Nikki did the deed while under "mindcrime" control. In the most optimistic interpretation, Mary remains alive, disguised as the nurse who treats Nikki in the sanitarium. Earlier incarnations of the stage show, in which Pamela Morris, the voice of Mary, returned in costume to sing background vocals, fueled support for this theory.

"We changed that," Tate says. "Her death is very evident, and Pamela is dressed completely different when she returns." He promises that this tour clears up the circumstances of Mary's demise.

Father William: Some fans picture this priest as an inherently noble man who loses his struggle with lust, an illusion aided by his ambiguous "thank you" when Nikki unloads his "barrel of death." "He's completely despicable," Tate counters.

Casting choices: Disturbingly, many faces spring to mind. Philip Seymour Hoffman, one of the most unflatteringly typecast actors working, would be an A-list pick, as would Willem Dafoe (in hyper-sleazy Wild at Heart mode).