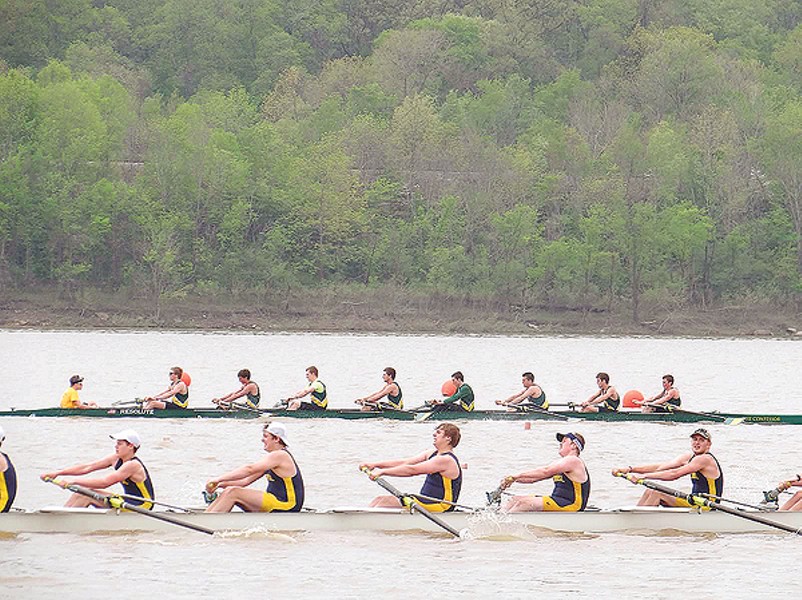 On Friday, the St. Edward's rowing team will take a ferry to Erieau, Ontario, to attempt a 54-mile rowing journey back home to Cleveland while raising money for autism research and a cancer fund. We spoke with St. Ed's director of rowing Matt Previts, who filled us in on all the crazy details.

So what's going on with this trip?

We're giving it a shot this weekend. The way it'll work is our team will travel up on Friday, stay Friday night, and then Saturday morning we have a launch window. It's a six-hour window where the weather has to be perfect to cross the lake and that's when we'll give it a shot. If the weather looks bad for either Saturday or Sunday, we'll just do that same distance on the river over a few hours. Either way, we're going 54.4 miles, it's just a question of if it's Canada-to-Cleveland or on the river.

How did the idea come about?

I think almost every rower in Cleveland, where you go out in the main entrance, rowing the harbor by downtown, you look over, and say, "You know, it's calm today, we could probably get to Canada. What do you think?" Everyone always says it jokingly and it wasn't until mid-summer that... The athletes wanted to do some kind of fundraiser, something philanthropic because one of the core values of the school is leadership. What can we do that's sort of big and bold and never been done before? Well, what if we tried to row from Canada back to Cleveland? Their eyes lit up and it kind of blew their mind initially but then they were like, "Coach, we'll sign up for it. What do we have to do?" And that's when we put up all the parameters around it; if you're going to try something like this, you have to do be sure you do it safely, so meeting with the Coast Guard, they've been wonderful partners helping us with an operational plan. Then we started the training because you have to be physically able to do this. Two weekends ago, they rode 45 miles down on a lake near Zanesville to physically prepare for what this is going to feel like. It's been like two and a half or three months of planning and preparing to give it shot.

How ambitious is this? I have no idea how far rowers typically row.

Typically in the fall, what they race, the distance is about three miles. In the spring season, the distance is one mile, so we're talking a distance 50 times greater than what they'd race. It's pretty unheard of. There are some places down south where they may row a marathon distance but this is two marathon distances plus one extra mile. We don't know of anyone that's actually gone across the lake with this distance that we've been able to detect. It's pretty ambitious physically; it's pretty ambitious logistically. But at the end of the day, the desire is to do the distance, and if we can't do that safely and guarantee that we can do it safely, we'll pull back from doing across the lake and do it on the river, which is still grueling.

I'm assuming you normally train on the Cuyahoga River?

Yup, usually a day for us is five or six miles on the river — that's pretty standard. Stacking that nine or ten times consecutively is a pretty good physical and mental toll on the athletes.

How different will rowing on Lake Erie be? I imagine the waves have to throw off the rhythm a little bit.

It can, and that's why we have to have near-flat conditions or maybe just half-footers at best because the boats you're in — 53 or 54 feet long — are only a foot and a half wide. So if you get some waves, the boat might get filled up with water and you're stuck or you'll have to pump out, which is not a good thing. We're using a couple different sources to measure wind, weather and waves. We can get a pretty good predictor a few days before of how it's going to work. They rowed in all kinds of conditions — they rowed in snow, sleet, in bumpy water — they're not afraid of it but they have to be safe about it.

Who are you raising money for and how did you pick them?

We chose two, and working with the athletes we asked what are some of the causes that impacted them, that have touched their lives. A couple of them have family members that have autism, so we got up with the International Center for Autism Research and Education at Case Western. It's incredible; they're doing such profound research on the sources of autism and potential ways to treat autism. That was important to our athletes, to be able to support that organization because it's a local one and it's having great impact. The other one — there's a brother of a student in the community named Michael Orbany; he was small in stature, big in terms of his presence. He passed away from cancer this spring, and he has a Hero Fund in his name at St. Baldrick's. Some of us have lost family members or have family members who have battled cancer, plus with losing Big Mike this spring, that was a natural one they wanted to contribute to.

How can people help out?

There's a website, it's actually pretty straight-forward: sehs.net/maplebacon. The name for this is actually "Operation Maple Bacon."

Yeah, what's the story behind that name?

When we came up with the idea, they were like, "Coach, we need a code word, something cool to call it." Well, let's think about it, what's cool in Canada? Maple leafs, that's pretty symbolic. And they have great bacon. "Coach, can we use bacon?" Well alright, we'll call it Maple Bacon. There you go. When you're doing something like this, the athletes need to have a good time with it, they need to have a smile on their face when they're talking about rowing this distance — for a lot of them, they've never attempted anything like this before. We wanted it to be something they bought into, and they very much did.