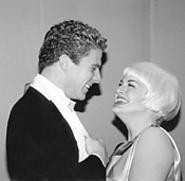 In the same blissful category as first love, first car, and first hot pastrami sandwich is the exuberance elicited by Beck Center's current production, Saturday Night. Perhaps its greatest bounty is that it reminds audiences that musical theater, when it clicks, can be one of life's indisputable pleasures.

Written by Stephen Sondheim when he was 24, this jubilant encapsulation of youthful ardor was to have had its Broadway premiere in 1955. It was to be the brash wunderkind's debut as lyricist/composer. Then its intended producer, Lemuel Ayres, inconveniently expired, causing the show to be buried and forgotten like a song-and-dance Pompeii.

In subsequent years, its creator would become increasingly proficient at using the tools of musical theater to honestly depict human interaction. Where previous tunesmiths used songs to decorate their stories, Sondheim, carrying on the tradition of Oscar Hammerstein II, used music to illuminate psychological nuance. As the master of pastiche, he took old Tin Pan Alley styles, waltzes, and even Victorian melodrama and created a landscape of disillusioned couples dancing and singing themselves into a state of moral collapse. Yet he managed to keep it all buoyant, insightful, and funny.

Excavated and first put on stage in London in 1997, Saturday Night brings back to view the optimistic boy-genius. It's charming and fresh, untainted by any trace of cynicism. Based on an insubstantial stage comedy titled Front Porch in Flatbush, by noted screenplay writers Julius and Philip Epstein, it's set in a 1928 Brooklyn that's on the cusp of the stock-market crash and is populated by wisecracking, warmhearted palookas ever angling to improve their lot in life. The main character, Gene, is a self-deluded dreamer with Park Avenue aspirations, who's eventually redeemed, in musical-comedy style, by the machinations of a nice girl. Despite his many shortcomings, Gene is adored by everyone with whom he comes in contact. Without Sondheim's enchanting score, the show would be little more than a compendium of reheated movie clichés. Witty and sophisticated, the score brims with clever lyrics and sprightly tunes. Even a couple of new numbers written by the 70-year-old composer seamlessly morph with those of his young self.

Beck Center's realization of this rediscovered show is the best musical experience of the season thus far. Admittedly, it doesn't completely escape the scourge of community theater. Director Fred Sternfeld, whose staging abounds in warmth and high spirits, has permitted certain snafus -- such as the determined mugging of a chronic scene-stealer and the distorted, muffled sounds of unnecessary amplification. Nevertheless, this is all minutiae compared to the joy of a cast loaded with charisma, performing a show that thrives on unalloyed charm.

The cast excels at demonstrating the pathos of a subculture steeped in insecurity. In the evening's highlight, Colin James Cook's virginal Bobby sings a powerhouse number about his fictional seductions, galvanizing the audience with his boyish roguery. As the show's married couple, Rebecca Borger and David Robeano have the rare ability to project both vulnerability and intoxicating whimsy.

Last summer, Jennifer Goodson managed to be both saucy and innocent as Maria in Cain Park's The Sound of Music. Here, under the tutelage of the same director, she dances a mean Charleston, sings a wistful torch number, and beguiles us with her emotional honesty. She plays Gene's love interest, Helen, a role that will be taken over by Laurel Held-Posey on April 5.

Perhaps the most inspired casting of the evening is Craig Recko as Gene, the evening's conflicted anti-hero. With his leading-man good looks, he embodies the masculine ideal of the late '20s. A radiant stage presence, Recko sings with the confidence of someone who has been making audiences swoon since puberty. He projects a slightly stiff demeanor, entirely appropriate for a character not comfortable in his environment. He makes the audience buy his lovable rogue.

Saturday Night is a happy addition to that charmed group of first musicals, including On the Town, Pajama Game, and Bye Bye Birdie. All have retained their springtime aura of budding genius.