The action's much meatier in Peter Jackson's second Rings film. 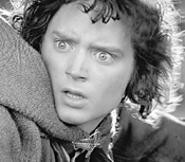 Fantasy is at its best when it ennobles our reality, and in this year's cinema, no fantasy towers above The Lord of the Rings: The Two Towers. The second installment of J.R.R. Tolkien's dark and delightful yarn is here adapted just as handily as last year's The Fellowship of the Ring. But in a shift from that film's generous pacing and visual novelty -- only a year ago, its magnitude was quite revolutionary -- director Peter Jackson has forged the middle of his cinematic trilogy with the immediacy of broadsword steel. It's a wise move. As the grand introductory act has become the year's must-own DVD set, putting the bucolic Shire, dank Moria, and new-agey Rivendell behind us in the collective cinematic consciousness, it's time to venture together bravely, with dubious guides and against terrible odds, into forbidding new realms.

You probably know the basic outline: A little hobbit named Frodo (gushy Elijah Wood, just grin and bear him) and his extremely dedicated gardener Sam (Sean Astin, the trilogy's true star) have taken on the rather unenviable task of trudging hundreds of miles across Middle Earth on their hairy bare feet to return a diabolical piece of jewelry to hellish Mordor, where it can be destroyed, thereby saving the world. Their unique anti-quest continues here, but their fellowship with assorted magical and homely accomplices has been broken, necessitating an episodic structure -- a tad clunkier than in the lyrical novel -- to keep everybody straight.

Neophytes -- if any remain -- will be puzzled but enthralled by Two Towers' no-nonsense approach. Dispensing with the first film's elvish opening exposition -- it's put on hold here until an awkward mid-narrative breather -- we're sent swooping over snowy mountain ranges, and then under them, to revisit a swift flashback involving wizened wizard Gandalf the Gay . . . er, Grey (Sir Ian McKellen) crashing deep into the earth to do battle with the enormous, demonic Balrog. It's a perfect overture, echoing Tolkien's favorite theme (benevolence is good; evil is bad), linking the movies sans scrolling prologue and reminding us that New Zealand's WETA effects team is -- ahem -- in the hai-ouse!

The story proper commences with Sam and Frodo being abruptly intercepted by the ghoulish Gollum, a sensational animated character (voiced and pantomimed most astoundingly by Andy Serkis) whose volatile emotions are so poignant that he deserves to stand beside Jack Nicholson in 2002's Best Actor lineup. Meanwhile, the big nasty Uruk-hai orcs of corrupt wizard Saruman the White (Christopher Lee) scamper about, giving everybody hell -- especially the unhappily abducted hobbits Merry (Dominic Monaghan) and Pippin (Scottish Billy Boyd, workin' that cute brogue). Hot on their trail are hunky human Aragorn (Viggo Mortensen), elegant elf Legolas (Orlando Bloom), and droll dwarf Gimli (John Rhys-Davies), who together constitute two-thirds of every schoolgirl's dream. Within the first 15 of the film's brisk 179 minutes, we've met most of the significant characters; within 30, virtually all of them.

What remains can be taken as pure spectacle, as the screenwriters (Jackson, his wife Fran Walsh, their friend Philippa Boyens, and Jackson's frequent collaborator, Stephen Sinclair) gleefully cut and paste Tolkien's epic set pieces, peppering them with what are presumably Kiwi colloquialisms ("Let's put a maggot-hole in your belly," offers an orc). Frodo, Sam, and Gollum trudge harrowingly through the Dead Marshes, Merry and Pippin explore Fangorn Forest. The others drop in on the Viking-like settlement of Edoras, then spend the movie's final third battling Saruman's 10,000 yecchy, highly belligerent orcs from the fortress of Helm's Deep, where Jackson & Co. cut loose with brazen warmongering on an epic scale.

Cynics could eviscerate these ostensibly childish proceedings -- indeed, the movie's plot shuffles along like a stack of trading cards -- were it not for the estimable heft of Tolkien's tale. One must take with several grains of salt the good professor's passionate declaration that he studiously eschewed allegory, for it takes nary a whit of imagination to view Helm's Deep as Poland, Sauron as the Russian Man of Steel, and Saruman as Der Führer. Though absorbed from the screen largely unconsciously, the author's views of hyperindustrialization, abuse of the good earth, and attempted genocide form a deep, dark, useful mirror reflecting Europe's recent past.

Since most audiences now grok Frodo's mission -- seemingly more than the blundering little masochist himself -- we're served up a plethora of supporting characters and subplots. In rustic Rohan, we encounter King Théoden (Bernard Hill), whose bold and braless niece Eowyn (Miranda Otto) and sturdy nephew Eomer (Karl Urban) struggle against the greasy and absurdly ill-appointed royal adviser, Gríma Wormtongue (Brad Dourif, sans eyebrows). Meanwhile, Merry and Pippin are shepherded by tall, ancient, arboreal Treebeard (voiced by John Rhys-Davies, compensating for his dwarf role), and Frodo, Sam, and Gollum get all screwed up by Faramir (David Wenham, boring), brother of the first movie's weak-willed Boromir. Rounding things out, we get frightened children, malevolent troops of Easterlings in thick eyeliner, plus a couple of zany, Monty Pythonesque orc leaders.

It takes a special aura to act in fantastic film, a daringness to blurt potentially embarrassing lines such as "This creature is bound to me and I to him!" While gritty "reality" woos most critics this time of year -- listen as the word "triumph" rings Pavlovian through the air -- it's easy to dismiss the Rings cast for doing little more than enduring prolonged close-ups without blinking -- but time will bear out their impressive work. Martin Scorsese's got Daniel Day-Lewis spewing overwrought hogwash in a Bugs Bunny voice, and Alexander Payne deftly prompts Jack Nicholson to reveal that Middle America sucks, but Jackson and his players offer the world a great big dream, requiring no more than a modicum of imagination.

Gollum is simply a masterstroke -- both from Tolkien and Jackson -- a grotesque fulcrum of wickedness and pathos who prompts nervous giggles not just because he's amusing (he loves his fish "raw and wrrrrrriggling!"), but because we've all known someone like him . . . or have even been him ourselves.

Another reason Two Towers will spark intrigue -- and likely divide "serious moviegoers" from "freaks" -- is that it puts out tremendous energy (the wanton butchery of countless orcs, the evident endangerment of several horses), yet leaves many gnawing questions unanswered, such as "What is Aragorn smoking?" and "Does Legolas shit in the woods?" and "Hugo Weaving?" Mystifying. Although armies and bizarre creatures clamber about all over the place, the real draw is the mix of the weird and familiar. You could run into someone like Gandalf at any art gallery. Glazed-eyed, know-it-all elves like Arwen (Liv Tyler) and Celeborn (Marton Csokas) are a dime a dozen at your local monster truck rally. And Mordor -- heck, that's just another name for Detroit.

Despite its much-deserved praise, the tale's not perfect. Christopher Lee's presence is limited to a glorified cameo, and he hardly gets to do anything. Lapses in logic abound, from Aragorn's blithe release of the demonic Wormtongue to the director's odd choice to conclude far short of the second book's thrilling wrap-up (perhaps the effects weren't ready). Primary musical themes by composer Howard Shore are made less special by their nearly note-for-note similarity to his work in Gangs of New York. Unfortunate seams. Nonetheless, The Two Towers is the year's greatest adventure, and Jackson's limited but enthusiastic adaptation has made literature literal without killing its soul -- a feat any thinking person is bound to appreciate.