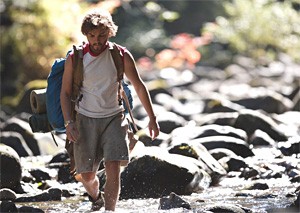 Into the Wild (Paramount)
Sean Penn waited a good decade before adapting Jon Krakauer's book about Chris McCandless, who graduated college in 1990, then disappeared into the American unknown, re-emerging as Alexander Supertramp before his final, tragic farewell in the Alaskan wilderness in '92. Penn's patience is evident in every finely wrought frame of this masterwork. Sadly, the film was overlooked at Oscar time in every category in which it should have been a contender — from Emile Hirsch's turn as McCandless, the restless lost soul seeking peace and salvation in the ether, to Penn's languid direction and vivid writing to Eddie Vedder's songs, each as vital as the tale itself. Hal Holbrook, too, is a revelation; he's at the pinnacle of an estimable career. The extras are scant, though: Two makings-of masquerading as docs — where are the commentary tracks, at least? — Robert Wilonsky

Radiant City (Koch Lorber)
Radiant City starts as an interesting documentary takedown of suburban sprawl; then the stench of self-righteousness and gimmickry sets in. The vignettes of one family's suburban life seem at first like highlights, and then you realize that the kids are a little too clever, their mother a little too theatrical in her soccer-mom brittleness. It's because they're actors — a fact not revealed until the final 10 minutes. It's supposed to be a jab at how phony the suburbs are, complete with a cavalcade of experts who keep saying we, when they obviously mean those lame-os who live in the suburbs. (Author James Howard Kunstler, in particular, is as smug as a freshly wiped asshole.) There's a lot to condemn the suburbs for, but this kangaroo court ain't doing it. — Jordan Harper

SNL in the '80s: Lost and Found (Universal)
Originally a two-hour special that aired in 2005, this peek at the backstage backslide following producer Lorne Michaels' 1980 departure provides all you'd want and more than you'll need about Saturday Night Live's most turbulent period. The extras prolong the original two-hour special by another hour, chronicling the show's fall from grace and rise from the ashes — and it's a tremendous add-on too, filling in the gaps with more about Damon Wayans' mid-sketch "meltdown" and eventual firing, and delving into allegations that the show's nothing more than a finishing school for pasty Ivy League boys. It skips little, providing clips of everything from Charlie Rocket's on-air "fuck" to Eddie Murphy's hot-tub highlights to the Dana Carvey-era high points, of which there were many. Still, no Phil Hartman as Ronnie Reagan or Larry David as disgruntled writer. — Wilonsky

The Love Boat: Season One, Volume One (CBS DVD)
John Ritter in a dress, Bill Bixby in a wheelchair, not to mention Milton Berle, Suzanne Somers, Scott Baio, Jaclyn Smith, Sherman Hemsley, Jim Nabors, Leslie Nielsen — the list is endless . . . no, bottomless. Watching this addictive collection of 12 episodes from the first season of Aaron Spelling's B-list buffet is like stumbling upon someone's stash of moldy People magazines from the Carter administration. It doesn't get more '70s than this: Each episode usually commingled an empty-headed T&A plotline with the story of a couple either meeting cute or getting divorced, and a third tragic tale — like that episode with Bixby, itself a mini-movie of the week occasionally interrupted by Charo. You don't want to watch, but you will, you will. — Wilonsky