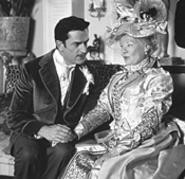 The plot of The Importance of Being Earnest, for those unfortunates who've missed it these past 109 years, goes something like this: A dandified London wastrel by the name of Algernon (Algy) Moncrieff (portrayed in this adaptation by Rupert Everett) welcomes into his chambers his friend and ally, Ernest (Colin Firth). However, Algy quickly learns -- as do we -- that Ernest's true name is John "Jack" Worthing and that the name "Ernest" is but a clever pseudonym that Jack uses exclusively for tomfoolery in the city, where he has ventured to propose to the beautiful Gwendolen Fairfax (Frances O'Connor), who loves him for his name (which she believes to be Ernest) despite being obtrusively guarded by her stern and meticulous mother (and Algy's aunt), Lady Bracknell (Dame Judi Dench), whose gruff interrogation confounds Jack and reveals not only that his name is not truly Ernest, but that he is an orphan with no proper social credentials. Thus, he repairs to his beautiful country home, which he shares with his romantic but repressed common-law niece, Cecily Cardew (Reese Witherspoon), who has taken an interest in Jack's urban "younger brother," Ernest. As fortune would have it, Algy's accumulated debts force him out of London. Algy descends upon Jack's idyllic estate and immediately introduces himself as Ernest, causing swoons in Cecily; confusion looms as Gwendolen makes her way to the same location to prove her love to Jack, whom she also knows as Ernest. This bungled nomenclature causes these longing souls to converge and conflict, and amid much delightful repartee, we wonder: Will the waggish liars find true love?

It's actually rather surprising that a full 50 years have passed since the last cinematic adaptation of Oscar Wilde's classic play (that being Anthony Asquith's superbly stuffy Technicolor romp from 1952). Considering the alacrity with which the entertainment industry remakes many of its far inferior stories (for which "writers" receive paychecks), one would think that a work of this caliber would remain a hot property. Go figure. Well, at least it's back again, and director Oliver Parker (An Ideal Husband) -- who also adapted the screenplay to include aspects from Wilde's unrevised four-act version of the play -- embraces the material with great gusto, delivering as charming and irresistible a film as one could demand.

Producer Barnaby Thompson -- a Brit who spent a few years over here co-producing the Wayne's World movies, then returned home to make Spice World -- clearly enjoys a Wilde time, having spearheaded An Ideal Husband (also starring Everett) back in 1999. For Earnest, he has assembled a crackerjack cast and crew, including supporting players Tom Wilkinson (The Full Monty) as the excitable Reverend Chasuble and Anna Massey (of the upcoming Possession) as Cecily's prim but hopeful tutor, Miss Prism. With everyone beautifully costumed by Maurizio Millenotti (the Zeffirelli Hamlet, with Mel Gibson) and cavorting to composer Charlie Mole's snazzy, Klezmer-tinged rags, the movie's a rare treat indeed. Look no further than Everett and Firth adventurously serenading their skeptical ladies across the lawn and through the manor house to savor a production as full of life as the two men are full of . . . er . . . verve.

The challenge of this production clearly lay in how to reinterpret the material, and -- mercifully and thankfully -- Parker virtually hasn't. Instead, modern audiences are welcomed into the story via lavish frames (courtesy of art director Luciana Arrighi and cinematographer Tony Pierce-Roberts), coupled with Wilde's endlessly engaging verbiage, the likes of which even his star pupils, singer Morrissey and actor-writer Stephen Fry (Wilde), have yet to match. Perhaps presciently alluding to Hollywood screenwriters, Lady Bracknell exhorts, "Ignorance is like a delicate, exotic fruit; touch it and the bloom is gone." If only more dialogue were so astute and tasty.

Happily, the mouths exchanging these robust retorts are quite up to snuff. Much of the veddy English show is focused upon the salable Tennesseean Reese Witherspoon -- following the tradition, set by fellow Yanks Gwyneth Paltrow and René Zellweger, of keeping young British actresses on the dole -- and her delivery is impeccable. Firth's as charming as he was as Darcy in Simon Langton's fine miniseries Pride and Prejudice, and Everett returns to Wilde with full vigor. The standout is O'Connor -- magnetically appealing in About Adam and the only appealing aspect of A.I. -- mesmerizing with Gwendolen's absurdity and ardor.

And what does Wilde communicate to us today? As much as ever, if not more: the quest for identity, the crucial hypocrisy of our modern age, the dalliances all seek but few admit. (The term still sounds uncomfortably perverse, but what's modern society but a massive herd of Bunburyists?) By returning Earnest to us with such flair, Parker offers exactly what Wilde was all about: a freak show with class.