Sergio's steps away from Brazil and into wonderful new flavors. 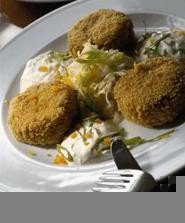 Like the dining room itself, the summer menu at Sergio's in University Circle is small yet stylish, filled with colorful, creative touches that elevate it far above its size. For that, credit goes to owner and well-seasoned chef Sergio Abramof, who founded his namesake salon near Severance Hall in 1995.

Since then, the Brazilian-born Abramof, formerly executive chef at Beachwood's upscale Ristorante Giovanni's, has gone on to found a second restaurant, the lovely Saravá, which opened on Shaker Square in 2005. Among other things, the empire-building gave Abramof an opportunity to specialize: He infused the considerably larger Saravá with a full-tilt Brazilian vibe and turned the formerly South American-influenced menu at Sergio's into a broader exploration of global delights.

While a few Brazilian dishes still linger, Sergio's current lunch and dinner menus are a celebration of world fare, ranging from a midday platter of penne in a lush, veal-rich Bolognese sauce to a dinner of Thai chicken served with lemongrass broth, scallion rice, and baby bok choy. Fish and seafood are the house specialty, offered as a handful of daily specials. And ample cheese platters (with a choice of one or more of the day's available cheeses) prove equally enticing as starters, desserts, or even as main events.

Paired with a crisp, organic Sauvignon Blanc ($35, from Napa Wine Co.), chosen from Sergio's annotated international wine list, the plate is a palate's playground, with plenty of opportunities to mix and match sweet with salty, crisp with creamy, and pungency with mellow richness. And not only are the offerings delicious; at a mere $5 per cheese, the platters seem particularly well priced. We only wish management would include a rundown of the available varieties and some tasting notes, on the list of daily specials, to ease decision-making.

In comparison to the sassy cheeses, one evening's starter of gazpacho, with a sort of muddled flavor and a texture akin to grocery-store salsa, barely budged the needle on the taste-o-meter. And at lunch, a ho-hum mixed-greens salad, topped with greasy "São Paulo spring rolls" and a flat, oily sesame vinaigrette, seemed like a bore.

Happily, the kitchen bounced back with two delightful dinnertime entrées. The first was a special of gently grilled wild Alaskan king salmon, vibrating beneath a touch of piquant watercress vinaigrette. On the side, a juicy tomato, yellow pepper, and cucumber salad, in a sheer Asian-style rice-vinegar dressing, expanded the summery theme; a bit of white rice stroked with a sweet-tart tomato vinaigrette was the third complementary flavor note in this light yet savory composition.

And yet, as playfully full-flavored as the salmon proved, it paled beside a trio of plump crab cakes, crisply fried and served with homemade cabbage slaw and thick lemon aïoli, as rich and light as whipped cream. A combo of crab, shrimp, and lobster, bound with a modicum of egg and fresh bread crumbs, and zapped with thyme, basil, and a blast of cayenne, the cakes embodied a blend of focused, high-test flavors that nearly took our breath away.

On the side, we added an à la carte portion of well-seasoned home fries, garnished with fresh parsley, butter, and deeply caramelized bits of onion; like a grown-up version of nursery food, they provided warm, melodious companionship to both the crab cakes and the salmon.

To complement the cuisine, Sergio's offers live music each Wednesday, Friday, and Saturday evening (details are available at www.sergioscleveland.com).

And for alfresco fans, seating on the snug 50-seat patio is available at both lunch and dinner. While the outdoor space is bound by a street, a driveway, and a parking lot, traffic is light and mostly slow-moving; and thanks to abundant greenery, cheery red umbrellas, and a fantastic view of architect Frank Gehry's undulating Peter B. Lewis Building, the patio turns out to be an especially charming spot for a midday recharge.

In fact, tucked into a pool of shade, sipping robust iced Brazilian coffee and sharing a taste of Ambrosia (a sweet, refreshing ending of vanilla-bean ice cream topped with pineapple, lime zest, ginger syrup, and a chewy coconut tuille), we hardly could have felt more energized. After all, we had just conquered the flavors of the world; just how hard could it be to get out of our chair and back to the office?