Set in Cleveland circa 1970, Forest City evokes pride and passion. 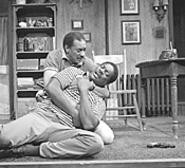 It's always been a curiosity that Cleveland, a city with a history of so many Byzantine civic convulsions (virtual bankruptcy, the Kucinich years) and such milestone events as the election of the nation's first African-American big-city mayor, has not been the subject of more journalistic and artistic activity. Indeed, why The Plain Dealer doesn't have a wall studded with Pulitzer Prizes for covering these and other seminal events over the past four decades is a topic for another day. But now, thanks to Cleveland native Bridgette A. Wimberly, we have Forest City, a play that takes place in the late 1960s, during the election of Carl Stokes to City Hall and the tumult caused by the proposed expansion of the minority-staffed and -operated Forest City Hospital in Glenville.

Brought to life by a stellar cast at the Cleveland Play House, this world premiere brilliantly conveys the aspirations and frustrations of one family living at ground zero of the hospital expansion -- fighting to save their house, their lifestyle, and, as it turns out, their lives in the face of what appears to be inevitable change. And while Wimberly is less successful in making the hospital's controversial eminent-domain issues resonate theatrically, her elucidation of the Taylor family is consistently funny, tender, and immensely believable.

J.T. Taylor and his wife, Sandra Mae, occupy a house on East 110th Street and Forest Hill Parkway, along with J.T.'s outspoken mother, four kids, and a cat. Day laborer J.T. is working multiple jobs (and ignoring his persistent cough) to keep his family afloat. But his recent dalliance with another woman has left Sandra deeply hurt and bewildered about how to reconcile her love for J.T. with the way his infidelity has distorted their relationship ("I can taste her on your lips . . . I don't fit into your arms like I did before," she laments). Meanwhile, Mother Taylor chides Sandra about having really wanted to marry J.T.'s adopted brother, Michael (now a heart doc at Forest City Hospital), instead of her natural-born son. The razor-tongued oldster also relates her own experience with her despised hubby, who booked right after she bought him a new pair of brogans. "Hell hath no fury like a woman you left in a pair of shoes she bought," she hilariously spits out at one point.

As in any movie you've ever seen, when a character coughs even once, it automatically signals medical tragedy on the horizon. And so it is with J.T., who's diagnosed as having a dangerously enlarged heart (yes, you can read that both ways). His cardiologist brother, Michael (Wiley Moore, in a skillfully balanced portrayal), can't do much for him beyond telling him to buy life insurance, so J.T. just keeps on loading trucks and trying to battle the hospital that is threatening to wipe out all the homes in his neighborhood.

Wimberly needlessly saddles her script with too many issues: In addition to J.T.'s ailment, Michael's young son, Benny, as well as Michael's physician-mentor, Clarence (Count Stovall), are suffering from evidently terminal illnesses. These colliding melodramas take the focus away from the intriguing face-off between black hospital activists, on the one side, and black neighborhood defenders, on the other. It's too bad, since that by itself would make a damn fine story (as it turned out, the neighborhood won, the hospital didn't expand, and it folded in 1978 -- due, in large part, to the integration of African Americans into Cleveland's larger health-care community). In addition, there is some extraneous gun-waving as well as references to voodoo-like rituals, which are never made fully relevant.

Still, these minor wrinkles and the thin hospital plotline are more than overcome by the rich gumbo of the Taylor family's relationships and struggles, which are played out in Beowulf Boritt's pitch-perfect rotating-house set. As J.T., Johnny Lee Davenport captures every nuance of his character's macho posturing and raging insecurities. And Davenport's scenes with Caroline S. Clay, who plays the sensible yet tormented Sandra, are so touching and genuine, you feel as if you ought to excuse yourself to let them be alone. But don't --otherwise, you'll miss the moment when husband and wife flirt with each other through their children's Barbie and Ken dolls, a scene at once pricelessly amusing and deeply affecting. They are most ably supported by Margaret Ford-Taylor, who, as Mother Taylor, brews up mysterious ritual cures and snaps off some of Wimberly's sharpest dialog. Revealing how she got even with her deadbeat husband, she says, "I sold his 'walkin'-out-on-me' ass to the medical school, and I don't know what they did with him after that."

Perceptive director Seth Gordon has taken Wimberly's script and brought out all its wit, wisdom, and humanity, making it virtually impossible to resist. That's why this Cleveland-themed work is sure to play well, around the country and beyond, in years to come.