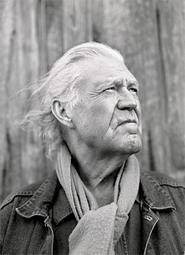 Billy Joe Shaver and I have been talking for about 20 minutes when I bring up his son Eddy, who died of a heroin overdose in 2000 -- on New Year's Eve. He passed just over a year after Shaver's wife and mother both succumbed to cancer.

Then in 2001, the outlaw country singer suffered a heart attack on stage, but survived, thanks only to a quadruple bypass.

I refer to all this death and misery as a "tough stretch," an obvious understatement. Still, Shaver will have none of it.

"I've run into so many people that have been through more. Oh, Lord. It's so overwhelming -- how much people have gone through," he says, phoning from a tour stop in Italy, Texas.

I tell Shaver I can't imagine losing someone with whom I've shared so much; life, after all, seems mostly about sharing. Yet these experiences inspired him to share them with his fans -- and they deeply appreciate it.

Shaver falls silent a moment, then murmurs his assent with three "yeahs" and a "You're right." He says he hadn't thought about it like that before, but it's true. He issues a heartfelt thank-you, and I feel a little verklempt. Two strangers shared just enough that it suddenly feels like our transaction is complete.

Before the interview ends, Shaver implores me to call him before he hits town. He wants to have a couple beers. That's the kind of guy he is -- a true Texas cowboy: honest and sincere.

After cranking out songs for publishing houses in the '60s, Shaver's break arrived in 1973. Kristofferson recorded Shaver's "Good Christian Soldier" for his hit album, The Silver Tongued Devil and I. He then produced Shaver's debut recording as a singer, Old Five and Dimers Like Me.

"We were outcasts more than outlaws," says Shaver with a chuckle, recalling how they pissed off the Nashville establishment. "They'd treat you like shit. We were just old country boys coming in there. We didn't know what that was about. So we just popped them."

Back then, Shaver and his thick-as-thieves friends lost many a weekend to booze and drugs. "I got to do twice as much as Willie and Waylon," he says.

While singers like Bobby Bare and Tom T. Hall rode Shaver's incredible tunes straight up the charts, he remained an underrated performer for a long time. For the first 20 years of his career, he only released seven albums. Shaver blames it on impetuous youth. "I stepped on a lot of toes, and I didn't care who, how big, or where."

During the '90s, as alt-country was taking off, Shaver started recording and touring with his son. Although they released several well-regarded albums, commercial success eluded them. That, with painful irony, wouldn't come until after the first wave of Shaver's heartbreaks: the loss of his wife, Brenda Ann Tindell, whom he married three times, and his mother, Victory, who raised him on her own. "I guess God knew I couldn't handle it without some dough," he says with a deadpan wit.

Help came from his old pals Nelson, Jennings, and Kristofferson. The quartet revisited some of Shaver's classic songs. Sharing its title with Jennings' classic LP, both of which are named after a Shaver tune, 2000's Honky Tonky Heroes topped the charts and stayed there half the year.

"I was successful because I kept writing through all that mess," he says. "I always figured if I wrote songs, it didn't matter if anyone did them or not. If they pleased me -- and not all of them would; I'm real critical of myself -- then I'm a success."

Aside from Shaver's gift for narrative, it's his honesty and optimism that give his tunes their power. Nowhere is Shaver's plainspoken wisdom better expressed than on "Try and Try Again."

"I went up on the mountain and looked down on my life/I'd squandered all my money, lost my son and wife," he sings. "My heart was filled with sorrow and I almost took my life/But I found the strength inside me to give life one more try."

Shaver says the song "dug me out of a hole. I was in a hole -- really bad in a hole. It saved my life, and it kept changing. At the time I first did it, my wife and son were still alive, and now I do it differently because they're both gone. And yet that's why I keep recording it over, because something keeps happening."

If inspiration were a faucet, we'd never be thirsty; instead it's like rain. Speaking to Shaver is to get caught in a sudden downpour. He started with very little, only making it to the eighth grade. He even lost parts of two fingers in a sawmill accident. But with guitar in hand, he has become a barroom poet, peering into the heart, song after song.

"If you write something honest, it's going to be different," explains Shaver. "The one thing we all have in common is we're all different. God made us that way and intended for us to stay that way, I think -- different. Instead, everybody is trying to be like everybody else."