Shakespeare troupe performs the Bard's works the way they were intended: Alfresco. 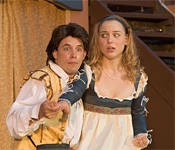 In Shakespeare's Two Gentlemen of Verona, it's no coincidence that Julia desperately tries to piece together a love note she's ripped to shreds, as she mutters, "Be calm, good wind. Blow not a word away." Artistic director Terry Burgler insists the line is intentional and a reminder that the Bard's plays were originally performed outdoors, as the Ohio Shakespeare Festival plans to do for the next couple of weekends in Akron. "For decades, we've tried to put Shakespeare behind the proscenium arch, where it's simply Freudian thinking out loud," he says. "The plays were meant for the actor to turn to the audience and say, 'This is what I'm thinking about,' instead of simply being narrative psychobabble."The performances mark the troupe's seventh year of staging Shakespeare's works in the midst of creeks, woods, and gardens. When Act 1 starts before the sun begins to set, the surroundings take on a new atmosphere. "I like the fact that, as evening comes, we have to add lights, because otherwise it would be pitch black," says Burgler. "It creates this telescopic effect from the big, sunlit expanse down to a tighter iris just as the action comes to a conclusion."In Verona, two men take a trip to Milan, where they encounter a string of romantic entanglements. With melodramatic twists, the play represents some of Shakespeare's strongest work later in his life. "And doing theater outside gives the play an extra sense of event," says Burgler. "Everyone doesn't have to sit in the dark and be quiet. In fact, quite the opposite is true." Showtime is at 8 p.m. Thursdays through Saturdays, through Saturday, July 12, at Stan Hywet Hall & Garden, 714 North Portage Path in Akron. Tickets are $12 to $16. Call 330-836-5533 or visit www.stanhywet.org.
Thursdays-Saturdays, 8 p.m. Starts: July 5. Continues through July 12, 2008