Over G Fighters: Only slightly easier than real flying. 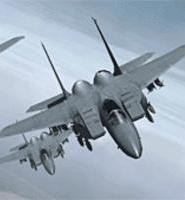 Flight sims -- games that emulate the experience of being in a cockpit -- are plenty popular on PCs, but have never taken off on home consoles.

This is partly due to their inherent complexity. When it comes to recreating an entire cockpit's worth of buttons, levers, and gizmos, the keyboard is much better suited than a game pad.

There's also a cultural difference between the two platforms. Weaned on games where all they need to know is what button shoots, most console players don't take well to thick instruction books filled with uncommon words like "yaw," "chaff," and "azimuth."

Over G Fighters is the latest attempt to bring a flight sim to home consoles. On its own terms, it's a fairly solid game. But anyone unfamiliar with the intricacies of the genre will be reaching for the eject button.

Over G begins with one of the most bizarre game plots in recent memory: In the not-so-distant future, a mysterious organization has taken over the planet and created a global government in the name of world peace. As one of the New World Order's fighter pilots, you're tasked with stamping out resistance.

But that's neither here nor there -- there are bogeys to splash! Off you go, into the wild blue yonder! And may God help you.

This cannot be emphasized enough: Over G is not Top Gun: The Game. If you try to pull Maverick's fancy moves, your pilot will black out from the g-forces, and the plane will stall and fall out of the sky. Most of the planes you shoot down are so far away, you can't even see them. And a single enemy missile can end your game.

Learning to play is almost as complicated as real-life flight school. You have to study how to take off and land (on both tarmac and an aircraft carrier), shoot down enemy fighters, bomb ground targets, and evade heat-seeking missiles. None of it is easy. For the first few hours, Over G feels more like a kamikaze sim.

The game features many real-world planes, each with its own nuances: The F-16, for example, offers nimble dogfighting, while the tank-killing A-10 flies like a bathtub.

For a home console, the controls are surprisingly good. A nice touch is that the right joystick allows you turn your head to spot bogies or pick out a nice place to crash-land.

The visuals are more of a mixed bag. While the planes themselves look great, everything else is blah. The ground below is especially bland; but then again, if you're seeing the terrain up close, something has gone horribly wrong.

The problem is that Over G doesn't suffer fools gladly. The game's instruction manual is way too brief, as opposed to most flight sims, which come with a small book. In-game tutorials are virtually nonexistent; the few that are available are written in poorly translated "Engrish." (Sample: "Aircraft setting is coordinated like genuine.") Unless you've already earned your wings, learning this game will be a dreary, frustrating chore.

For those who have the patience of a Zen master, Over G is probably the best game of its kind on consoles. For everybody else, you're better off sticking with Ace Combat, the popular Namco dogfight game that's loads of fun, but couldn't be less realistic if your copilot were a kangaroo.