You don't have to be Jewish to love Cain Park's Fiddler. 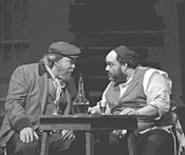 In some ways, being an actor in live theater sorta sucks. No matter how good a show is, once it's over, it's gone. You can tell people how great it was, and they nod, blankly, giving you that condescending, tight-lipped half-smile. If you try to videotape a performance, it's usually unwatchable, since stage-acting doesn't translate well to the small screen: It's like trying to capture the breathtaking panorama of the Grand Canyon with an Instamatic. So you're stuck reading yellowed reviews and sharing the memories with fellow participants over a few tequilas.

On the other hand, one of the unique pleasures only stage actors are privy to is feeling the "gotcha" -- the moment in a play when the actors know they have earned the complete trust of an audience. It's almost a visceral sensation, as you feel the audience slump contentedly in your arms, like a small child ready to hear a story. Once that happens, actors know they can cut loose and take their patrons on a glorious theatrical ride. Since achieving the "gotcha" is totally dependent on blending the skills of the director, performers, and crew, these moments are experienced only occasionally. That's why such productions must be treasured.

In Cain Park's fabulous Fiddler on the Roof, the "gotcha" moment arrives sometime during the celebratory song "To Life," as the poor milkman Tevye toasts the agreement to marry his eldest daughter to the town butcher. Coming on the heels of the rousing show opener "Tradition" and the humorous "Matchmaker" (superbly sung with girlish sass by Kari Kandel, Jennifer Zappola, and Hannah DelMonte), this number turned the large audience as supple as Silly Putty, ready to be shaped by the enormously gifted 42-person cast.

Let's admit right here that Fiddler is a frequently performed theatrical staple (in fact, another production of the play is also running in the area). So there is no truly compelling reason to see yet another musical iteration of Sholem Aleichem's stories -- except when the production in question is performed with passion, intelligence, and professional precision. Happily, that is the case with this Fiddler, produced by the City of Cleveland Heights.

Anchoring the familiar tale of the bemused and quizzical Tevye and his tradition-flouting daughters is Tom Fulton, who imbues this Jewish peasant in turn-of-the-20th-century Russia with a joy for life and a devotion to family that fairly oozes from every pore. Fulton's richly burnished singing voice, impish wit, and flashpoint rages combine to craft a Tevye who is at once proud and humble, and flawed without being quirky. Fulton is matched, step for step, by Paula Duesing's rendering of Tevye's wry wife, Golde, a woman displaying devout obedience -- along with a religious insistence on getting her own way. Their second-act song "Do You Love Me?" is deliciously tender, a heartfelt anthem for any couple that has been sharing the same toothbrush holder for more than a couple of decades.

The smaller roles are handled with panache. Sean Szaller, the town tailor, is a symphony of hitches and twitches as he tries to woo Tevye's eldest daughter while cowering in Papa's presence. Colin Cook brings a sinewy edge to the rebellious student who passes through from Kiev and soon sets his sights on Tevye's daughter number two. And the butcher Lazar Wolf, whose marriage hopes are put through the meat grinder, is played with beefy indignation by Noah Budin.

While there are many well-known songs by Jerry Bock and Sheldon Harnick in this show, there are also a couple of clinkers. But even the most forgettable tunes are given a big hug, thanks to music director Larry Hartzell, who fills the Evans Amphitheater with the emotion of the lovely "Sunrise, Sunset" and the unbounded glee of the "Wedding Dance." The mood of the play is also enhanced by the flexible set design of Jeff Herrmann, enabling fast scene changes and capturing the essence of time and place with deftly executed scenic touches.

But in any show this heavily populated and complex, the ultimate praise must go to the director. By focusing on the pulsing humanity of Aleichem's fragile yet feisty Jewish community, Fred Sternfeld helps this Fiddler soar where other, more frothy interpretations fall flat. He uses every inch of the massive outdoor space to stage eye-popping numbers, such as the swirling dream dance dominated by a 10-foot-tall apparition and the solemn "Sabbath Prayer." And Sternfeld's crowd management is ideal, showing admirable attention to the smallest detail without drawing attention to itself.

At the beginning of the play, Tevye points out that, without tradition, the villagers' lives would be as shaky as a fiddler on the roof. The same is true of our theatrical traditions -- especially when those archetypes are brought to such vibrant, joyous life. Mazel tov!