Local rock fest gives it up for the little guys. 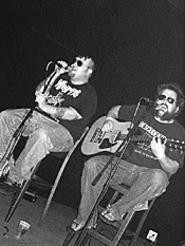 A disdain for backroom music deals motivates Jeremy Koteles' passion for the annual D.I.Y. Fest, which features 34 bands from as far away as South Carolina, Missouri, and Alabama. "There are shady promoters and show-bookers that set up events and abuse the privilege -- such as not paying bands, not living up to their word," says Koteles. "I make sure I pay all the bands."

The weekend comes to a close with a 1 a.m. hoedown Monday morning, led by the prog-country twangers of Uncle Fucker. "Think of a bunch of beautiful girls playing violins and a 60-year-old guitarist kickin' out the jams like no other," says Koteles. D.I.Y. Fest gets rockin' from 1 p.m. to 2 a.m. Saturday and Sunday at Mahall's 20 Lanes, 13200 Madison Avenue in Lakewood. Tickets are $10, available by calling 216-521-3280. -- Cris Glaser

Fairport Harbor might have its holidays all mixed up, but no matter. We plan to party hearty at this weekend's Mardi Gras Festival all the same. Other revelers can have their Fourth of July, says spokesman Jim Cardina; the tiny village knows what it's doing. Unlike other Mardi Gras fetes, which happen in chilly February, Fairport's is "right on the beach," says Cardina. And despite its lack of beads-for-breasts shenanigans, there's plenty of fun to be had. It all starts off with a two-hour parade, led by Miss Mardi Gras 2005. After that, it's five days' worth of dancing, food, drinks, live music, and rides. It culminates in a giant fireworks display on, yep, the Fourth of July. The free fest runs from 5 to 11 p.m. Thursday and Friday and noon to 11 p.m. Saturday, Sunday, and Monday; call 440-352-0806. -- Chad Felton

Come Out, Wherever You Are
Spooky Hide and Seek arrives on DVD.

If you thought the twisty finish to Hide and Seek was a bit of a shocker, wait till you see the four alternate endings included on the DVD (which comes out on Tuesday). The otherwise rote thriller, about a boogeyman haunting precocious moppet Dakota Fanning, stars a slumming Robert De Niro as a recent widow adjusting to being a single father. He must also cope with his daughter's new imaginary friend, who's fond of writing cryptic messages in blood. In addition to the quartet of new conclusions -- pretty much variations on the same theme -- there are more than a dozen deleted and extended scenes, commentary by the film's director and editor, and a behind-the-scenes featurette. -- Michael Gallucci

Summerfest05 organizer Packy Malley claims to have the largest fireworks display in town. "I always wanted the biggest fireworks show," he says, "and now I've got it." In addition to live music, carnival rides, and more fair food than you can shake a cheese-on-a-stick at, there'll be plenty of pretty pyrotechnics from noon to midnight Saturday and Sunday at Cuyahoga County Fairgrounds, 164 Eastland Road in Berea. Admission is $5; call 216-241-3460. -- Lucy McKernan