It's Man vs. Beast. And it's totally cool to root for the beast. 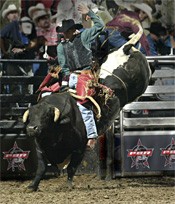 When the Professional Bull Riders Tour stops in Canton this weekend, it's okay to root for the mammoth bovines over the dudes going along for the bumpy ride. Even the competitors say so. "Whether they stay on the bull or not, they'll probably get thrown in the end. Everybody wants to see the wreck, but they don't want to see anybody get hurt," says Denise Abbott, the tour's spokeswoman. "But the riders getting tossed? They're all for that." Unlike athletes, who might sit out a game when they strain their groin, bull riders take the pain. After all, they've made the choice to climb aboard the animals for a living. "They are really tough. They ride with broken ribs. They have pins in their bones. They have casts, braces, and everything else," says Abbott. "If they don't ride, they don't get paid."The two-day tournament is an intense showcase for many B-level riders, who hope to grab face time on the tour's TV airings. But the competition is still a test between man and beast, not the riders against each other. "Everybody always asks the riders who the guy that you want to beat is. But they feel like they're in competition with the bulls," says Abbott. "Every time they get on the bull, they could die." The mayhem starts at 8 p.m. today and tomorrow at the Canton Civic Center, 1101 Market Avenue North in Canton. Tickets are $16 to $21 in advance and $18 to $23 at the door. Call 330-489-3090 or visit www.cantonciviccenter.com.
Feb. 2-3, 8 p.m., 2008