One picture may speak 1,000 words, but this film about one says considerably less. 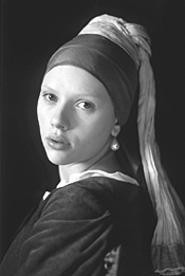 So have you ever wondered what exactly goes into the painting of a portrait? You might have suspected there's more to it than a painter saying something along the lines of "Hey baby, can I, uh, paint you?" and then someone else saying, "Yeah, sure, that'd be cool." You might be right -- there does, indeed, tend to be a little more to it than that. But not much more, at least if Girl With a Pearl Earring is to be believed.

Not a great deal is known about the 17th-century Dutch painter Jan Vermeer, so there's plenty of room to speculate, which is exactly what Tracy Chevalier did when she wrote the book upon which this film is based. Chevalier was inspired by a poster of the famous painting that she had possessed since she was 19; little surprise, then, that this Vermeer, as portrayed by Colin Firth, plays like a teenage girl's fantasy of a sensitive-yet-sexy artist. Apparently, Vermeer was the sole passionate hippie in a town full of puritans, the latter group epitomized by Tom Wilkinson as designated horny old hypocrite Master Van Ruijven.

Art director Ben Van Os (The Cook, The Thief, His Wife and Her Lover) clearly had the time of his life on this film -- every frame is lovingly composed and crafted like a Vermeer painting. Yet while the movie is beautiful to look at, the story is strangely lacking; the novel's first chapter, available online at author Chevalier's website (tchevalier.com), seems to contain more plot points than the entire film. Important details, such as why Griet's father looks grievously injured at the movie's beginning or what the religious conflicts of the day were, are hinted at in the film and probably very clear if you already know the book, but director Peter Webber and screenwriter Olivia Hetreed (both making their feature-film debuts) have given them short shrift for the cold moviegoer, and the drama suffers as a result.

Onscreen, the story can be summed up very simply: Vermeer wants to paint his new servant, and his lecherous patron wants to buy it; other people think this is a rather inappropriate idea, and the servant herself has mixed feelings. Along the way, Griet has a somewhat gratuitous romance with a butcher's son (28 Days Later's Cillian Murphy, looking for all the world like Disney's Pinocchio), and we get to see and hear where different colors of paint come from -- Van Ruijven gleefully informs us that "Indian yellow" is "distilled from the urine of sacred cows raised only on mango leaves."

And that's it, really. So, yeah, painting's kinda cool. And artists are all passionate and stuff, but they don't necessarily do anything with those passions other than paint. Oh, wait -- Vermeer did father at least 11 children, though given what a cold fish his wife appears to be in the film, you'll wonder exactly how that worked. And the pearl earring? You'll have to see the film to find out where it comes from, but the answer really isn't that exciting.