Panic at the Disco loses an exclamation point, discovers the Beatles 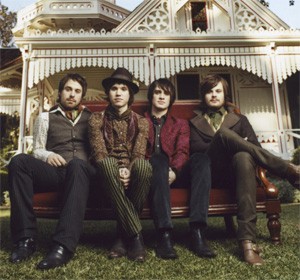 Contrary to all those rumors that surged across the internet a few months ago, there's no conspiracy behind Panic at the Disco's disappearing exclamation point. It's all a matter of getting rid of something that didn't belong there in the first place. Or so says drummer Spencer Smith.

"We didn't ever really see it as part of our name," he says. "[Guitarist Ryan Ross] wrote it like that on our very first PureVolume website before we even had 5,000 listens. But it kinda caught on, and as fans told each other about us, it grew from there. When [the record company] asked us if we wanted to put it on the new album cover, we said, 'Nah, leave it out.' We didn't think it would cause all this uproar."

Never mind that the erstwhile Panic! At the Disco deep-sixed the punctuation mark right around the same time it unveiled the first single from its second album, Pretty. Odd. Never mind that the Las Vegas pop-punks — who used to write riff-fueled songs with unwieldy titles like "The Only Difference Between Martyrdom and Suicide Is Press Coverage" and "There's a Good Reason These Tables Are Numbered Honey, You Just Haven't Thought of It Yet" — were now going all baroque-pop. And never mind that the four kids who sold two million copies of their debut album while still in their teens can now legally order beers (except for Smith, who'll turn 21 in September). They claim that the excising of that exclamation point should not be symbolically read as a new beginning for Panic at the Disco.

Fine. We'll accept that. But Pretty. Odd, which debuted at No. 2 in March, sure sounds like a fresh start for the band, which barely made a blip when A Fever You Can't Sweat Out was released in September 2005. It certainly doesn't sound like the same group that sent a link to its PureVolume site to tabloid-magnet and Fall Out Boy bassist Pete Wentz, who was so impressed with Panic — and presumably their shared affinity for guyliner and really long song titles that have absolutely nothing to do with the songs themselves — that he signed the band to his Decaydance record label before the foursome even performed live.

Fever's three-minute pop-punk blasts — loaded with pop-culture references to Fight Club author Chuck Palahniuk and Rushmore director Wes Anderson — have been replaced by strings, horns, and lavish arrangements that can leave the most fragile emo kids dizzy. And it all started where Big Leaps Forward like this usually start: with Mom and Dad's record collection.

"We were growing out of some of the stuff we liked as teenagers," says Smith, who founded the group with Ross when they were 13. "And we just discovered things that our parents grew up with, a lot of the late-'60s stuff. It was stuff we all knew, but when you're young, you want to have your own thing and not listen to what your parents like. We just came back to that and realized how good it really was."

Pretty. Odd's best songs — the singles "Nine in the Afternoon" and "That Green Gentleman (Things Have Changed)" — are swathed in Sgt. Pepper's shimmering accessories. Horns blast, strings swell, and Brendon Urie sings like he's leading a parade of rainbow-colored frogs to a poppy-filled meadow, where they'll frolic peacefully with tiny hippopotami. The strings were even recorded at the Beatles' old stomping grounds at Abbey Road Studios.

"There weren't many rules back then, and bands kinda did whatever they wanted," says Smith, who says the Beatles' Magical Mystery Tour and David Bowie's Hunky Dory were constantly played during recording. "We took that mentality, rather than specifically mimic something. It's timeless."

Panic worked out most of the string and horn charts with producer Rob Mathes, whose credits include Avril Lavigne and Rod Stewart. Some cuts, like the tossed-off and twangy "Folkin' Around," grew out of jam sessions the band hatched in the studio. "We were just messing around," recalls Smith. "And we came up with these playful ditties. We had a lot of fun recording them with these different old microphones."

There was one snag: The guys needed to figure out how to bulk up all those horn- and string-lathered songs in concert, since — unlike its orchestra-assisted Saturday Night Live performance a couple of months ago — they can't afford to bring extra musicians on the road. (Panic at the Disco is headlining the two-month Honda Civic Tour, which also features Motion City Soundtrack, the Hush Sound, and Phantom Planet.) "We found ways to just fill them in," says Smith. "Honestly, with five people making music onstage" — Panic brings a keyboard player on tour — "and three of them singing, you can make enough sound."

At least most longtime fans — and by longtime fans, we mean those who've been around since A Fever You Can't Sweat Out broke out a mere two years ago — seem happy with Pretty. Odd. Message boards buzzed more about that missing exclamation point than Panic's paisley makeover. Besides, says Smith, he really doesn't think the group has changed that much. "It just felt right," he says, "even though it was musically different.

"If we had the recording budget for the first album that we had this time, there would have been a lot more stuff on [Fever]. We knew that we loved the songs. That was the same feeling we had from the first one, when there were no expectations."