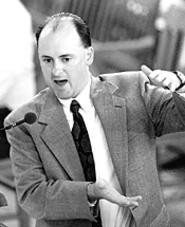 A mutiny stirred. Or so the story went.

Last year, Governor Bob Taft named Jo Ann Davidson the interim director of the woeful Department of Job and Family Services. The choice -- Davidson was speaker of the House until being retired by term limits -- was praised by Republicans and Democrats alike.

Conservatives, however, were outraged. Representatives of the Ohio Taxpayers Association, Christian Coalition of Ohio, Family First, and Ohio Gun Rights Coalition gathered in force to denounce Taft's choice on the grounds that she supported higher taxes, abortion rights, and gun control.

Jennette Bradley, Taft's running mate in this fall's election, met with similar derision. "All he did was pick an abortionist for a lieutenant governor's candidate," the Christian Coalition's George Manos told The Akron Beacon Journal.

Manos and other conservatives threatened to field a candidate of their own. Ohio's big dailies used phrases like "heavy fire" and "broadside" to capture the fury. Cue the storm clouds and the ominous music.

But Taft -- not renowned for his courage -- stuck by Davidson and Bradley. Apparently he knew something state political reporters didn't: These conservative groups could muster up a good press conference, but little else. They failed to put an alternative candidate on the ballot.

"With many of these organizations, I'd like to see their membership lists," says state Representative Jim Trakas (R-Independence). "It's one thing to call themselves representative, but how many people do they actually represent?"

But election results suggest that Joseph is less a right-wing Moses than he is a guy who likes fancy letterhead. In 1998, he finished dead last in a four-man race for a seat on the state Republican Party Central Committee. Two years later, he lost his seat on Franklin County's Central Committee -- about as minuscule an office as there is -- 661 votes to 587.

Heading multiple organizations, as it turns out, is a conservative-activist trait. Tanya Lee is listed as the contact for both the Family First Education Fund and Citizens for Community Values. At least she and Joseph have working telephones. The Pro-Family Network ("Righteousness exalts a nation, but sin is a reproach to any people") claims 36,000 members, according to President Greg Quinlan. But apparently those 36,000 people don't have enough money to cover the phone bill. When Scene tried to call the network's Dayton headquarters, the phone was disconnected. Quinlan, a nurse, had to be reached on his cell phone while he and his kids toured Kings Island amusement park.

Nor do these groups strictly adhere to their holy missions. The Ohio Taxpayers Association -- "Your pro-taxpayer voice at the statehouse" -- purports to put enemies of the people on notice: "We're not here to make friends," goes its slogan, "we're here to get things done!"

That's the pledge. Here's the reality:

Last fall, the governor submitted a budget fix that called for $465 million in "revenue enhancements." Scott Pullins, the association's chairman, said the accurate term was a "blatant tax hike." A few weeks later, however, after Speaker Larry Householder pushed the plan through the House, Pullins had seen the light: The state had merely "closed loopholes."

State Representative Tim Grendell (R-Chester Township) compares Pullins's change of heart to that of Saul on the road to Damascus. Pullins's conversion was probably not so divine: A year earlier, Householder had given the group $18,000 from his campaign fund.

Then, in January, Pullins was out. He said he was stepping down to pursue a law degree, but Statehouse observers say he was fired by the National Taxpayers Union, the OTA's parent group. (NTU President John Berthoud says the founder "issued a directive to end the relationship.")

Pullins was not long in exile. He soon emerged as the head of a new, reincorporated Ohio Taxpayers Association. And again he acquiesced to a Householder-approved tax hike: the 31-cent-a-pack markup on cigarettes.

Pullins says the taxpayers were OK with the smoke tax, because the final version of the bill scaled back the increase by 19 cents and made other tax concessions. "The legislature's feeling was 'We've got a compromise here, so don't beat us up for agreeing to the compromise,' and I think that makes sense," he says.

To many, it didn't. The OTA, chuckles state Senator Eric Fingerhut (D-Cleveland), should change its name to the Ohio Tax-Raisers Association.

Adds Trakas: "They lost all credibility."

Regardless, Pullins soldiers on. But on whose behalf? Pullins says the OTA has 5,000 members, but it lacks a board, and his wife is the president. Capitol-step whispers say Householder is calling the shots. "We do work closely with Larry Householder," Pullins says. "I don't think that's a big secret. We've been pretty up-front about the issue. Sometimes we're with him. Sometimes we're not."

Not long after lying down on the cigarette tax -- which will tug $283 million a year from Ohio smokers -- the group unleashed hell on a rental-car tariff the City of Columbus passed. The OTA spent $64,000 on a petition drive to put the $4-a-day tax on the fall ballot, even though it is expected to yield just $5 million, and much of that will come from out-of-state visitors.

Strange priorities? Well, the taxpayers' fires were stoked in no small part by the generosity of car-rental agencies. The OTA accepts unlimited corporate donations. "The car-rental companies have certainly been involved in this campaign," Pullins says. "We have to make decisions with them in mind."

Smokers, it seems, failed to get appropriately "involved."