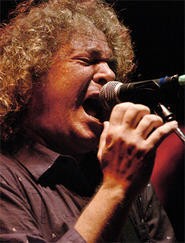 "It was for working with local musicians that Mitch will be most known," says Classic Metal Show host Chris Akin. "While his thoughts of glory always seemed to be there, it was his time in the trenches that defined him."

Karczewski, who was 58 when he died on September 25, pioneered the practice of loading up shows with local bands, which helped keep metal alive in Northeast Ohio during the lean days of the 1990s.

As the longtime owner of Lorain's Flying Machine, he hosted festivals like the World Series of Metal and gigs by Manowar, Anthrax, and Vanilla Ice. He had a promoter's gift for suspect rhetoric: Bands playing the Machine were often under the impression they were playing Cleveland, or a town reasonably close by. But Karczewski lacked the single-minded self-obsession that would have helped him achieve his long-term goals.

As a manager, Karczewski guided the early careers of Mushroomhead and Bobaflex, but the handshake deals he worked under failed to yield dividends. As those groups moved on, he remained a player on the local scene. After closing the Flying Machine in 2004, he was content running his Lorain club, one of that city's few outlets for live rock. In recent years, he became a grandfather and concentrated on his longtime obsession with breaking an all-girl rock band, working with Cleveland's Level-C.

"He was our father, our friend, and business partner all wrapped up in one," says Level-C guitarist Christina Crago. "Mitch was the man with the answers to all questions we had. Mitch's dream was to sit up front on the tour bus while we were all asleep and watch the sun come up, while traveling the world. That was our dream for him as well."

Read much more about Karczewski at blogs.clevescene.com.

· Former members of the noise-rock group Jerk, including Roué frontman Justin Coulter, have reconvened as the even more abrasive Shells. Tuesday, October 16, they play a DIY show at the Tower with These Are Powers, a Brooklyn group featuring members of Liars and No Things.

· Cleveland hip-hop mixologist Mick Boogie is featured twice in the new XXL magazine. The DJ appears in an article about the latest trend in mixtapes: downloadable, artist-sponsored mixes. His collaboration with Brooklyn emcee Skyzoo also receives an XL rating (which is good). Boogie's latest major project is Detention, a concept-album collaboration with Kidz in the Hall, a Chicago-New Jersey duo mentored by Just Blaze. The mix is available exclusively at iTunes, but visit blogs.clevescene.com for a link to the Skyzoo mix.