by Diane Sofranec and Cris Glaser 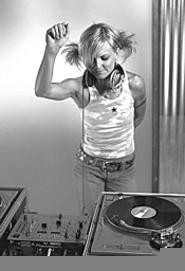 As a black belt and ex-karate instructor, DJ Kimberly S. kicks some major ass at West Hollywood's trendy gay nightclubs. She's bringing her roundhouse kicks to the turntables Saturday night for the Erie Party at Bounce, one of five blowouts happening this weekend at the AIDS Taskforce-sponsored Dancin': The Last Dance. (Other parties take place at Scene Pavilion, Twist, Karma, and gay bathhouse Club Cleveland.)

"I'm just going to go in there and play with a lot of energy and a positive vibe that I always like to bring forward," says the 37-year-old Kimberly, who plays the DJ on the WB's Charmed. "I love taking people on a journey and feeling the love afterward."

Kimberly also loves to size up how gays and lesbians party: The men drink more bottled water; the women drink whatever they get their hands on. As for music? "There are a lot of girls who like a lot of hip-hop and R&B. Whatever has saturated radio is what they're into at that time," she says. "The boys? They like the divas." Dancin' runs Friday through Sunday at various city venues. Tickets range from $5 to $55. For a complete schedule of performance times and locations, visit www.dancinweekend.com or call 216-357-2223. -- Cris Glaser

Accordion to Tradition
East 185th Street rolls out the barrels.

Even Frankie Yankovic couldn't pass up a chance to play the East 185th Street Festival years ago. Since the polka king died in 1998, Slovenian-, Italian-, and Polish-style bands from as far as New York have jockeyed for stage time at the festival. While folks fill up on sausage sandwiches, elephant ears, and beer, Bob Kravos, the Polka Hall of Fame All-Stars, and other world-music bands will play the nationality stage. At the other end of the street, the contemporary music stage will rock with local bands, including Sumrada and Festivus. The festival caps off Sunday with a parade of more than 100 marching bands, musical units, and floats. Events take place from 5 to 11 p.m. Wednesday and Thursday, July 29; 5 p.m. to midnight Friday, July 30; 2 p.m. to midnight Saturday, July 31; and 1 to 10 p.m. Sunday, August 1, on East 185th Street (between Pawnee and Chickasaw avenues). Admission is free. Call 216-481-7660 for more information. -- Cris Glaser

"There's nothing like looking over the shoulder of a [live] lizard, snake, or alligator and seeing the bones of the long-lost reptiles -- the dinosaurs -- behind them," says Harvey Webster, director of wildlife resources at the history museum, which hosts this weekend's Snakes Alive! A Herp Spectacular. Members of the Northern Ohio Association of Herpetologists will be on hand to show off specimens from their personal collections and to discuss the habitats and histories of their pet snakes, turtles, and lizards. Creepy! It takes place from 10 a.m. to 5 p.m. Saturday and noon to 5 p.m. Sunday at the Cleveland Museum of Natural History, 1 Wade Oval Drive. Admission is $7, $5 for kids; call 216-231-4600. -- Diane Sofranec

Matter of Life and Dance

In Bullet for a Ballerina, nobody knows how the aging Vera von Vichyssoise has come up with the money to merge a classical-dance troupe with a modern-dance company. And somebody wants her dead! "It's a spoof and a satire," says director Denise Gula. "And they're taken to the extreme." Solve the whodunit in this dinner-theater production at 7 p.m. Friday and Saturday at the Cleveland Play House, 8500 Euclid Avenue. Tickets are $15 to $29.50; call 216-795-7000. -- Cris Glaser