Carol Cummings went to court for the right to clean your teeth. 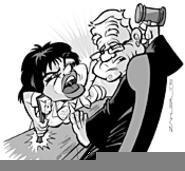 Carol Cummings dreamed of being a dental hygienist. The 40-year-old mother of two nearly coasted through her first year of classes at Tri-C with a B average. But she got hung up on Head and Neck Anatomy, a difficult course in which students must memorize dozens of bones, arteries and muscles.

Last year, after the final exam, Cummings got the bad news: She had scored a 73 percent in the exam portion of the class, two points shy of what she needed to pass. But she wasn't about to let it go.

She disputed the grade through Tri-C's internal-resolution program -- claiming that the professor had unfairly switched the scoring method for the class midstream -- but found no takers. Next she complained to Tri-C President Jerry Sue Thornton, who wouldn't touch it. When the college sent Cummings a letter informing her that she had flunked out and then canceled her financial aid, it was the final straw.

Cummings sued. And as Tri-C would soon find out, Cummings may have been a lousy hygienist, but she was a decorated veteran of litigation.

She began her love affair with the legal system around the same time that her seven-year marriage was crumbling. In 1998, her husband, Larry Tuckosh, filed for divorce. But if he thought that living with her was rough, he didn't know the half of it.

The divorce dragged on almost six years, including appeals and a separate case involving a foreclosure on Tuckosh's machine shop. By the time it was over, Cummings had demanded that no fewer than three judges and a magistrate recuse themselves, claiming that each was biased for reasons ranging from conflict of interests to a personal grudge. She burned through a total of eight attorneys, eventually opting to represent herself. At one point, she even asked that the Harrison County Child Support Enforcement Agency recuse itself, saying that it had stood by as Tuckosh withheld support, then slashed her payments when she complained. She had to be told that the court had no authority over the agency.

Cummings' antics even raised eyebrows among members of the jaded courthouse crowd, who thought they had seen everything. "You mention [her] in the courthouse, and everybody cringes," says a worker in the clerk's office of the Harrison County Common Pleas Court, who asked that her name not be used for fear of being dragged into court.

In the midst of the divorce, Cummings went back to school. In 1998, she took her first class in almost 20 years at Cleveland State University. Two years later, she transferred to the dental-hygiene program at Lorain County Community College, aided in part by a letter from her uncle, Former Cuyahoga County Juvenile Court Judge William Chinnock. But taking a full load of challenging courses, raising two kids, and fighting an ugly court battle was more than she could handle. She flunked out of the program in her first semester.

Rather than accept responsibility, she blamed the college. She claimed that staff members tried to derail her entry into the program by tricking her into not taking a prerequisite course. What's more, Cummings said, they'd done it because they're prejudiced against Asians. (Cummings is half Korean, but you wouldn't know it from looking at her.)

It didn't stop there. Cummings claimed that one of her professors, Denise Price, "targeted her for removal." Among other things, she claimed that Price berated her in front of the class, unfairly gave her an F on a paper because of three typos, tested on uncovered material, and came to class drunk.

The allegations were ludicrous on their face, but the college nonetheless conducted an internal investigation, led by Roy Anderson, director of LCCC's Allied Health and Nursing Division. Price denied everything, claiming that she didn't even realize Cummings was half Korean until she read her statement. Anderson also compared several students' papers with Cummings' and concluded that Price's grading was "rigorous, but fair."

Classmates wouldn't back Cummings either. One of them, Meg Kobilarcik, tells Scene that Cummings "just didn't grasp anything" in class. "We could spend an hour talking about one thing in detail, and she would turn around and raise her hand and say, 'Okay, now what are we talking about?'"

But Cummings was no dunce when it came to getting her way. She called the investigation a "whitewash," claiming that Anderson had "spoon-fed" answers to Price and had denied Cummings legal counsel at a meeting she had attended with Price and Anderson. (Price and Anderson declined interview requests.) Cummings threatened to cry to regulators in Columbus, but that didn't move college administrators.

Then things got really weird.

Cummings lashed out at Kobilarcik, apparently targeting her because she was one of Price's favorite students. Cummings allegedly stole Kobilarcik's typodont, a model jaw for practicing teeth-cleaning, then bragged about it in an e-mail befitting a member of Batman's rogue's gallery.

"Now you won't have them to practice on, and you'll go back to school and FAIL! Too bad I won't be there to enjoy it," Cummings wrote, apparently unable to find the proper emoticon to express sinister laughter.

In the same e-mail, Cummings let Kobilarcik in on her plan to get rid of Price. "I have the dirt on her that would make her boss see what many of us already do (of course not you). She's nothing but an athletic, alcoholic slut."

But Cummings never carried out her scheme. Instead, she decided to harness her exemplary people skills for the greater good: by becoming a nurse.

It was a short-lived dream. After three months in LCCC's nursing program, she called it quits. She decided to go back to dental hygiene, this time at Tri-C. But when she botched Head and Neck Anatomy, she was back on the warpath.

This time, she made a federal case of it. Her lawsuit demanded that Tri-C readmit her and that professor Jane Durocher-Jones, Dental Hygiene Program Director Mary Lou Gerosky, and President Thornton pony up a cool million in punitive damages. (All three declined requests for interviews.)

Judge Ann Aldrich found Cummings' claims lacking, but gave her the benefit of the doubt. She ordered Tri-C to readmit Cummings -- but only if she could pass Head and Neck Anatomy. To earn her new grade, Cummings would retake two exams.

The next day, she marched victoriously back into Durocher-Jones' classroom and took her seat. Two weeks later, she retook the exams, but flunked again, missing once more by two percentage points.

Yet Cummings had learned to prepare for failure. While her classmates were memorizing anatomy, she was keeping a diary of daily grievances. She claimed that Durocher-Jones took revenge on her by making snide remarks about her to the class, encouraging students to verbally attack her, and conspiring with other instructors to fail her. She also claimed that Durocher-Jones rigged the second exams so that she would fail, something even Cummings' own lawyer, Jeffrey James, admits is a crock. "They were not designed differently," he says. "They were the identical tests."

Cummings filed a court motion to bar Tri-C from kicking her out of the program, but dropped her case a month later because she ran out of money.

But in January, Cummings sued the college again, this time to remove three failing grades from her transcripts. Attorney James argues that the F's shouldn't count, because technically she was never readmitted to the program. "How can you consider that she was enrolled in those classes?" he asks. "She was actually forbidden from continuing."

With a judgment looming, Cummings is now making new accusations. In a thick sheaf of papers she sent to Scene, she claims to be the victim of a vast academic conspiracy to keep her from becoming a dental hygienist. She even accuses Thornton of "theft in office" for using public tax dollars to defend the college -- from her own lawsuit.

"What I feel I'm doing is right," she says quietly. "This has been very traumatic for me. That's all I want to say."