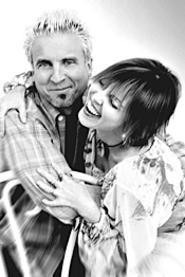 With no embarrassing attempts at modernizing her sound to relate to the nebulous and mysterious age group known as "the kids," early MTV vixen Pat Benatar embodies the term "aging gracefully." Sure, she can't escape the countless reruns of VH1's I Love the '80s, which preserve the badass pixie look she sported during her arena-rock heyday: cheekbones as spiky as her high heels, raccoonish rings of black eyeliner, and post-disco fashion glitz. But the Brooklyn-born, Long Island-raised Benatar realized in the 1990s that her meat and potatoes are the chart glories that made her a superstar in the first place -- album-rock staples such as "Hit Me With Your Best Shot," "Shadows of the Night," and "Love Is a Battlefield." Her most recent endeavors -- a slew of live albums, a smoking duet of "Heartbreaker" with Lisa Marie Presley on VH1's Divas Duets, and this summer's tour with husband/collaborator/Cleveland native Neil Giraldo -- all wisely celebrate the times when selling out the local arena was a lock, rather than a longshot.