Pawn Sacrifice is a Solid Biopic of Chess' Biggest Celebrity 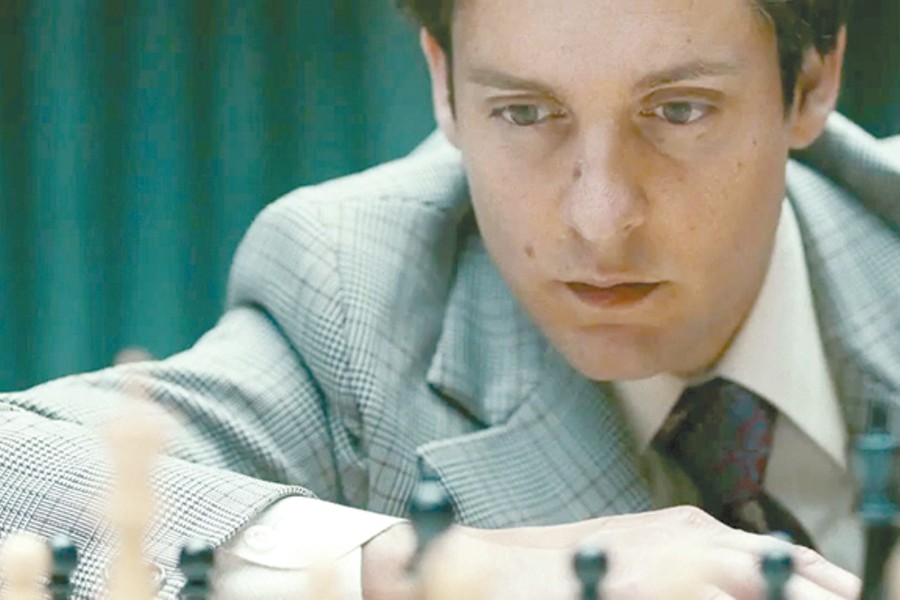 Tobey Maguire stars as the paranoid chess prodigy Bobby Fischer in Pawn Sacrifice, directed by Edward Zwick and opening everywhere Friday. Fischer took on the Soviet heavyweight Boris Spassky (Liev Schrieber) in a hugely publicized World Championship match in 1972, billed as an important battle in the ongoing Cold War. Unlike hockey or gymnastics, for example, chess represented an intellectual confrontation. It was, therefore, in the imagination of a fiercely patriotic viewing public who tuned in to watch chess — hardly a spectator sport — and discussed Fischer's moves as they might discuss a football team's late-game heroics, a more accurate measurement of the American vs. the Soviet way of life.

So a great deal was at stake for Fischer when he reluctantly traveled to Iceland in 1972. Even the President of the United States — Richard Nixon, pre-Watergate — called Fischer's bunker when Fischer failed to show up for a match. By that time, Fischer's mind had already been infected with anti-semitism, anti-communism and an intense, violent paranoia. So in addition to being a methodical student and player of chess, he was also a volatile personality. He tended to make outlandish demands before every match and threatened to walk if they weren't met.

Through his international ascent, he was guided and calmed by both an agent (A Serious Man's Michael Stuhlburg) and a former rival, unnerved by the effect of chess on Fischer's mental health (Peter Sarsgaard).

Though Fischer vs. Spassky is the film's culmination and brilliant third act, the events leading up to the contest are fairly bland, if well-composed. Scenes of Fischer's Brooklyn youth, in an apartment with his activist mother and her commie friends, are somewhat uneven. His relationship with his big sister (Lily Rabe) isn't given enough screen time to germinate. The montage-conducive rise to chess prominence is about what you'd expect — Maguire does nail Fischer's look and cadence — but the origins of his paranoid descent are never quite clear. They seem inextricably linked to both his youth and his devotion to the game, and then exacerbated by the tenor of the times.

Indeed, the film hints that Spassky suffers from similar demons, though nowhere near as debilitating as his American adversary's. In one strong scene, Spassky addresses the Russian authorities he's convinced are listening in to his hotel room via phone bugs or hidden cameras. In the next scene, during one of his championship matches with Fischer, held in an underground rec room at Fischer's request, Spassky is convinced that his chair is bugged.

This reviewer might even argue that Schreiber's portrayal of the Soviet champion is stronger than Maguire's of the broad, erratic Fischer. Spassky, a man babied and manacled by the Soviet system, seems to prefer America — he's caught playing pinball at a pizza parlor late one night before an exhibition match in California — and yet he cannot make heads nor tails of his opponent, who plays recklessly and spontaneously and yet with a genius the game had never known.

Fischer's 12-game match against Spassky (in particular, Game 6) was so elegant that international grandmasters were said to watch him play with actual tears in their eyes. You won't be thus moved while watching Pawn Sacrifice, but the Icelandic bout is captured with all the manic intensity of a Superbowl, but with all the post-hippie anxieties of the early '70s to boot. Strong performances, good look, good movie. But let the record show: It's got less heart than 1993's family drama, Searching for Bobby Fischer.