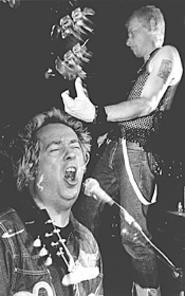 Local hard rockers Dirt recently earned an ASCAPlus Award for their moody single "Need." The award, presented by the American Society of Composers, Authors, and Publishers, recognizes the work of artists in the early stages of their careers. "Need" will be part of Dirt's forthcoming full-length debut, Welcome to the Pressure Cooker.

In other news, Dirt is one of 26 finalists among the 600 submissions received for the AIDS Rock Ohio competition. The band, which formed in 1996, will perform later this summer at the Factory in Columbus, as part of the contest. The winner will receive a recording contract and a chance to perform at the Schottenstein Center on Sunday, September 14.

· "I'm a tortured-soul kind of a guy," former Step Sister/Dark/Knifedance frontman Tom Dark says with a laugh, when discussing his new book of Step Sister lyrics, If He's the Singer, Then What the Hell Is He Saying? "The lyrics are a little on the dark side."

That's an understatement. A cross between moody troubadour Nick Cave and punk provocateur Darby Crash, Dark's writings are Bukowski-influenced tales of whiskey and regret. The book (released on Dark's own Red Hour Records and available at www.elkgirl.com/ stepsister), a fitting epitaph for one of Cleveland's most underrated bands, is Dark's first foray back into the public eye since Step Sister folded last October. It kicks off a flurry of activity for the frontman: He just finished mastering a new album of Step Sister outtakes and live cuts (due out later this year), and he's got a new compilation of Dark material in the works for the Grand Theft Audio label. Dark's also starting a band, with former Laughing Hyenas guitarist Larissa Strickland and Dirty Three drummer Jim White; the project should get under way by the end of the year.

· Akron reggae favorite B.E. Mann has been included in a new tribute CD to reggae legend Peter Tosh. Mann's "Irie (2003 Mix)" will appear on Put My Faith in Jah, alongside such reggae legends as Toots & the Maytals and Big Mountain. Scheduled for release on August 5, the album can be pre-ordered via the Peter Tosh website at www.ptosh.com. All proceeds go to the Peter Tosh Foundation, which runs Instruments for the Youth, a program that provides gear to musicians in Jamaica who can't afford their own.

· The Warped Tour's complete lineup of local bands has been announced: Joining hardcore stalwarts Victory Flag at Tower City Amphitheater on August 5 will be hard-charging Cleveland punks the Narcoleptics, ska favorites the Skanktronics, and pop punks the Interns. The bands will perform on the Ernie Ball Local Heroes stage as part of the Ernie Ball Battle of the Bands 7. Fans can go to www.ernieball.com to vote for their favorite groups from each city on the tour. The top five bands chosen from the 200-plus competitors will win a showcase gig before industry types at L.A.'s Key Club in October.