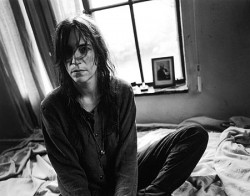 At the very start of Patti Smith: Dream of Life, a documentary about the punk poet, horses gallop in slow motion across the screen. It's an image that references Smith's 1975 debut album, Horses, a still-riveting slice of rock 'n' roll poetry that borrows a stable full of words and sounds from her many influences. The scene unspools as Smith narrates her timeline in a brief and detached voice-over: "I was born in Chicago." "In 1967, I left for New York City." "In 1974 I recorded 'Piss Factory.'"

Steven Sebring's film is often just as detached. But since he was able to follow Smith around with his camera for the past 11 years, it's also an intimate portrait of a woman who's always held her fame, fans and personal life at arm's length. There's little archival footage here (one intriguing clip shows a young Smith reading one of her poetic odes to N.Y.C.); most of Dream of Life is filmed in hazy, artsy and often grainy black-and-white, capturing Smith onstage, backstage, in her apartment and on the road during the '90s and '00s.

Smith admits that she wanted to be an opera singer or a jazz singer or someone like Billie Holiday when she was younger. "I never dreamed of singing in a rock 'n' roll band," she says. Sebring immediately cuts to a scene of the androgynous Smith (who turns 62 at the end of the month) onstage, fronting a band that's ferociously tearing through "Gloria." This was destiny, it howls.

Throughout the movie, Sebring shows Smith as someone who not only appreciates art - Great American Songbook standards, the paintings of Willem de Kooning, Bob Dylan songs and Gregory Corso's beat poetry all figure into the doc at one point or another - she constantly draws inspiration from it and applies it to her own work. There's a scene where she's painting while musing on Pablo Picasso's "Guernica" and its influence on Jackson Pollock. She also manages to drop T.S. Eliot's name into this already-artsy mix.

Still, there are plenty of intimate and illuminating moments in Dream of Life, including scenes of Smith singing along to an old recording of "Stardust," fumbling through Dylan's "A Hard Rain's A-Gonna Fall" on a Depression-era acoustic guitar, showing off her favorite dress when she was little ("one of the few things left from my childhood," she says) and goofing around with her two kids.

In the movie's most revealing scene, she visits her parents at their small New Jersey home, where Mom cooks burgers and Dad brews coffee. It's heartening to see Smith - a notorious prickly artist - cozying up with her family in a cramped kitchen that's swamped with cow figurines. She even still calls her father "daddy." "I've gone deaf in one ear listening to her band," says her proud pop, as Smith rolls her eyes and chuckles like a little girl.

Sebring shot parts of the film as Smith toured Europe, Asia and the Middle East over the past decade. Overseas, she totes around an old Polaroid camera, visiting the grave of poet William Blake, reading an angry treatise onstage that slams President Bush for "befouling our country's name" and laughing off a fan's comment that she's a rock icon, which makes her "think of Mount Rushmore."

She also gets reflective, reminiscing over photographer pal Robert Mapplethorpe, who shot the cover of Horses and died of AIDS in 1989. Smith shows off gifts he gave her and recalls the times they spent together in New York. She also dumps some of Mapplethorpe's remains into her hand to show Sebring's probing camera.

Dream of Life - which is heavy on iconic religious imagery, like artsy, fuzzy shots of rosary beads and cemetery statues - makes much of these moments of mortality. Smith's husband, former MC5 guitarist Fred "Sonic" Smith, and her beloved brother Todd both died of heart attacks in 1994. She's clearly a woman haunted as well as influenced by the past.

But the movie isn't for casual fans who might know Smith from her only Top 40 hit, "Because the Night," or because they see her name in Rolling Stone from time to time. Sebring drops viewers into Smith's story; her narrated timeline at the beginning of the film is pretty much all the historical perspective you get. This personal and meditative piece is more concerned with her dreams - of life, death and otherwise.