A little balance could go a long way for Pucci's. 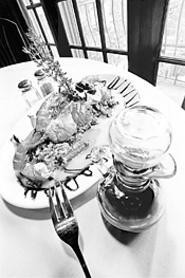 Besides the lustrous copper ceilings, there's not much left inside Pucci's in the Valley to remind diners of the late, great Maison Martel, the friendly French restaurant that occupied this space in Liberty Commons back in the 1980s. Then again, Liberty Commons isn't what it used to be, either: The pleasant bookstores, boutiques, and card shops that once lined this European-style courtyard are long gone, and what's taken their place is a mundane collection of white-collar bars, professional office space, and empty storefronts. Even the area's onetime biggest draw, Liberty Street Brewing Company, finally called it quits, pulling up stakes earlier this summer.

Still, once inside Gus and Christopher Gallucci's pretty Italian restaurant, it's folly to dwell on the past or to fret about the future. In the here and now, the restaurant's muted terra-cotta walls, gentle archways, and rough stone floors conjure up an image both rustic and sophisticated. A small black-granite-topped bar, lit by a lineup of tiny halogen pendant lamps, beckons from one side of the room; the cozy Tuscan-flavored dining area summons from the other. Two muted televisions -- one at the bar and another set into the front of the hostess stand, and just visible from the dining room -- often provide sneak peeks via closed circuitry into Executive Chef Chris Quinn's kitchen; other times, you can catch glimpses of anything from Emeril (bam!) to wrestling smackdowns (wham!) flickering across the screens. Bouquets of redheaded miniature carnations added color to the white-linen-draped tables during recent visits, although they looked a few days past their prime. Maybe the noise from the crowded room made them cower; I know it forced us to shout at one another across our smallish two-top on a busy Saturday night.

The brothers Gallucci -- great-nephews of Gust Gallucci, founder of Cleveland's famous Italian market -- are congenial hosts, and their servers make up in friendliness what they may lack in polish. To wit, a smiling Saturday night server was embarrassingly impressed when we recognized a snapdragon blossom garnish on our plate ("You're smart; I can't tell those flowers apart!"), and Thursday night's service moved at the pace of sautéed escargot, without a word of explanation from our otherwise chatty waitress.

Together, Chef Quinn and the Galluccis have assembled a fairly expensive, medium-sized dinner menu that relies on fresh ingredients and Italian imports, often combined in creative and unusual ways. Timid diners can still find the ubiquitous penne in marinara or margherita pizza here, but a number of more inspired options call out to those willing to listen. For instance, an uncommonly good calamari steak, in a lush Marsala wine sauce, with lots of roasted plum tomato wedges and a few buttery cloves of roasted garlic, was firm, tender, and bursting with well-balanced flavors. Tuscan Lasagna -- thin sheets of green basil and red pepper Ohio City Pasta noodles, layered with grilled vegetables, marinara, and mascarpone -- was a delight, with the tang of roasted tomatoes shimmering through the richness of the double-cream cheese. The Bundled Treasures appetizer (chopped imported artichoke hearts, roasted red pepper, and fresh basil leaves, bundled up in a sheet of freshly made mozzarella) was mellow and round on the palate.

To up the flavor ante of its dishes, the kitchen often employs intensely flavored sauces, reductions, and infusions. Here, the results can be uneven. For instance, a heady balsamic reduction, all sleek and dark, was one of the best around and added a joyful sweet-tart tang to everything it touched. On the other hand, the spinach oil that was drizzled on several dishes was a misfire, with a dull, grassy taste that reminded us of hay. A painfully salty fontina cream sauce put the final kibosh on an appetizer of skewered and grilled prosciutto-wrapped scampi, two hefty crustaceans that had already been subjected to a certain amount of overcooking. And a Saturday night special of delicate, deftly grilled tilefish, with creamy, fennel-studded polenta and a disappointing collection of fibrous roasted green and yellow beans, was ill-served by a tidal wave of dessert-sweet sambuca sauce that swept away any nuance of flavor.

In other situations, though, the sauces proved to be an entrée's saving grace. Pollo con Amico, a brick-pressed and grilled boneless chicken breast and semi-boneless leg, was entirely mundane, save for the shattering wash of prosciutto-flecked sage sauce and some very good garlic mashed potatoes. And Veal Christopher -- twin breaded cutlets stuffed with satiny spinach, mushrooms, and a bit of Asiago -- would have been surprisingly bland if it weren't for the balsamic reduction and garlicky truffle oil that anointed it. Happily, a magnificent risotto, nearly as rich and creamy as custard and beautifully seasoned with Asiago, bits of spinach, mushroom, and roasted red pepper, was plated with the veal and turned out to be an absolute scene-stealer.

Considering the Italian passion for good breads, the contents of Pucci's breadbasket were uninspired. Despite being freshly baked in-house, the slices of average ciabatta-style bread and the halves of soft, kaiser-type rolls, brushed with a drop of garlic oil and dusted with a hint of grated parmesan, lacked character. A bowl of prettily piped salmon-colored butter, barely flavored with roasted red pepper, accompanied the bread but added little pizzazz.

Salads here are à la carte and generally large enough to share. One evening's companion and I split an impeccable mesclun salad -- with a simple red wine vinaigrette, red onion slices, crumbs of robust goat cheese, specks of pecans, and a sprinkle of thin, crisply fried prosciutto -- and enjoyed every bite. On another evening, we tried the baby greens salad, with tiny yellow pear tomatoes, pine nuts, sliced pear, and a bit of shaved Romano; this was a mistake. The pear was underripe and hard; worse, it had been carelessly sliced, so it still contained seeds and core. And the dressing -- a heavy raspberry vinaigrette -- was unable to bring the flavors into balance.

Pucci's kitchen also has a thing for herb and flower garnishes, a pretty enough conceit when used in moderation, but almost silly when overdone. Here, however, the "more is better" philosophy was in full force. A tired, rumpled pansy languished on the calamari steak; the carnation bud that topped the Bundled Treasures was only somewhat fresher. Big branches of sage waved from the Veal Christopher and the bricked chicken; snapdragon blossoms were showered on the skewered scampi. Even desserts weren't safe from the onslaught: One evening, both freshly made tiramisu and a very good Molten Chocolate Cake, paired with an ice-cream-filled tuille, were topped with big, spiky chive blossoms. On another evening, a mostly melted, unmemorable Bananas Foster was garnished with a flag of mint, and a modest portion of firm crème brûlée came decorated with fresh berries and a stalk of wilting basil. The overall impression was of a kitchen so taken with the notion of floral garnishes that it just tossed them on pell-mell, without much concern as to what they actually added to the dish in terms of flavor, aroma, or appearance.

Certainly, we give Pucci's high marks for the bright sparks of exuberance and artistry that its kitchen often shows. But enthusiasm generally demands equal parts restraint, and creativity should be guided by a firm grasp of the culinary basics. When Quinn and the Galluccis strike the proper balance between creativity and discipline, the results are dishes like the jubilant risotto, the imaginative Tuscan Lasagna, and the memorable calamari steak. But when they let themselves run wild, the outcome can be self-conscious and overwrought. Once this talented kitchen achieves a permanent equilibrium, however, its shining moments could be all it takes to illuminate Liberty Commons anew.