Lakewood's home for striking views looks great in the kitchen now too. 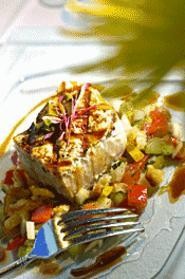 Love it or loathe it, the old Pier W was an important part of the Cleveland dining scene for nearly 40 years, not least of all for its prime location atop a Lakewood cliff overlooking Lake Erie. After all, rolling vineyards, magnificent waterfalls, and tropical beaches are in short supply around here; what we do have is a Great Lake, a gritty shoreline, and a not-too-shabby downtown skyline that make a uniquely compelling backdrop to a meal -- assuming you can find a vantage point. Historically, Pier W offered neither unforgettable food nor sophisticated decor -- but it did have the view, and that was enough to make it a player.

Everything but that view had changed by last July, when Pier W reopened after eight months of intensive remodeling. With the restaurant's sleek new decor and menu of finely wrought seafood, staring out the window should be the last thing on your mind.

In fact, three of us spent nearly three hours in the dining room during a recent Sunday brunch (that venerable Pier W tradition finally was reestablished in October) and scarcely even noticed as our fair city played a charming game of peekaboo from behind a bank of fog. Why would we, when we could feast our eyes on steaming bowls of bouillabaisse, chock-full of salmon, swordfish, mussels, and Manila clams? Or ogle oodles of icy West Coast oysters on the half shell, with a sassy little rice-wine vinegar mignonette?

Then there was the whole smoked salmon, as moist and rich as if it had just come off a Norwegian's backyard smoker; and the stunningly delicate smoked trout, from Ducktrap River Fish Farm in Maine, prepared without a hint of artificial-tasting flavorings or chemicals.

And those were just for starters. Executive Chef Anthony Phenis, a Culinary Institute of America grad, and his crew prepare dozens of items from scratch for each Sunday's brunch, from ahi tuna sushi to apple crisp. And while schlepping through the typical buffet line, with its overcooked entrées, limp salads, and stale desserts, has never been our idea of dining, Phenis and his staffers have apparently unearthed the secret for doing brunch right, with fresh preparations, top-quality ingredients, and regular replenishments, so that the food is nearly always at its best.

Well, all right . . . So the chicken Marsala was a little dry. And unless you are under 6 or over 90, you can safely skip the so-so French toast and the ho-hum Belgian waffles. Same goes for the steamed rice and the insipid-looking veggies, languishing in a chafing dish. But the Vermont maple sausage, the applewood-smoked bacon, and the eggs Benedict were all above average. And the seafood Newburg, a toss of salmon, cod, and succulent baby shrimp, in a heady paprika-and-brandy cream sauce? Now that was downright yummy. Ditto for the P.E.I. mussels, in a buttery white wine and garlic broth; as a bonus, be sure to grab a length of French bread from the pastry table to sop up every drop. (With apologies to our city's own fine bakers, these baguettes, from Tribeca Oven Bakery in New Jersey, are really something special.)

And there were more temptations still, like crunchy crusted salmon croquettes, cured olives in crushed red pepper, homemade-mozzarella salad, and a pure, breezy-tasting baby-shrimp salad dressed in tarragon aïoli. There were fresh fruits, cheeses, and thickly sliced prosciutto, capicolla, and Genoa salami. And there was the mandatory carved-to-order roasted turkey breast and tender, rare top round, served with warm au jus and a satiny horseradish cream.

For dessert, it would have been downright disrespectful not to make at least a few trips to the lavish dessert bar. After all, Phenis says, his pastry chef and two assistants spend 12 hours each week preparing more than 1,200 sweet servings for the Sunday-brunch crowd, and we weren't about to let them think their efforts weren't appreciated. Besides, how can a diner not have room for such darling little tidbits as diminutive chocolate pots de crème, bite-sized cannoli, chocolate-covered strawberries, or sleek little shooters of sweet-tart cranberries, interspersed with layers of almond-flavored whipped cream?

Food quality aside, management has made other decisions that help turn this brunch into one of the city's finest. For one: Rather than laying out the grub in the middle of the dining room and subjecting guests to the predictable feeding frenzy, the buffet is set up inside the restaurant's semicircular bar and lounge. Thus, the sights and sounds of the chow-down are kept at bay, and the dining room remains a relaxing spot to linger while debating the propriety of snaring just one final oyster before calling it a day.

Cleanliness, often a major bugaboo for buffet lines, is also an apparent virtue at Pier W. We spotted no drips, drabs, or stains on the table coverings, no serving spoons clotted with dried food, and other than the whole salmon -- which was looking considerably less dapper by the end of brunch service than it had at the start -- nothing that wasn't neat, tidy, and well maintained.

For the most part, that extended to the table service too. Only once did we make it back to our seats with new provisions before the old plates had been whisked away. And while our cheerful server somehow neglected to give us the obligatory "Help yourself to the buffet whenever you're ready" command, she redeemed herself by appearing at our side at exactly 1:01 p.m. to announce that the bar was finally open. (Two words here: Bloody Marys.)

Not surprisingly, a spot that can turn out such a laudable brunch buffet excels at sit-down dining too. Phenis' seasonal dinner menu is a seafood-lover's delight, with ingredients ranging from fresh Hawaiian sunfish (a Saturday-night special) to Great Lakes walleye, and from traditional classics like shrimp cocktail and lobster bisque to contemporary marvels like roasted-beet salad and a trio of bite-sized grouper tacos, tucked into frangible won-ton shells and topped with micro cilantro from The Chef's Garden. (The Huron, Ohio farm provides gourmet veggies to some of the finest restaurants in the nation.)

While Phenis is well grounded in classical French technique, he doesn't hesitate to take his ingredients on worldly adventures. That mild, slightly sweet Hawaiian sunfish, for instance, got the Thai treatment with the additions of coconut, chiles, and short-grained botan rice flavored with bamboo juice. And digging into a thick, impeccably fresh filet of grilled Block Island swordfish, served on an unctuously rounded panzanella salad rife with the flavors of olive oil, basil, and fennel, was like basking in the Mediterranean sun.

The food-friendly wine list (efficiently printed on the back of the dinner menu) is as smartly assembled as the bill of fare, with almost 30 wines by the glass, including gems like the crisp, citrusy Giesen Sauvignon Blanc ($6.50) and the plush, intense Alluvium ($14), a Merlot-and-Cab blend from California's Sonoma County. Ten half-bottle options and more than 100 full bottles, mostly in the $35 to $65 range, round out the grapey goodness.

For dessert, consider such seasonal sweets as maple-syrup-infused crème brûlée, pumpkin cheesecake, and a petite tart of roasted hazelnuts and cranberries dressed in a ribbon of caramel, a wisp of crème Anglaise, and a pearly orb of Woo City vanilla-bean ice cream. Or, for the virtuous, conclude with a cup of Illy cappuccino, served in a dainty demitasse and sided by homemade anise-almond biscotti. Other possibilities include a well-appointed cheese platter or something from the list of ports, sherries, cognacs, dessert wines, or spirituous coffees.

And -- oh yeah -- don't forget to pause for a moment to marvel at the view. It's no longer the best part about dining at Pier W, but it's still a knockout.