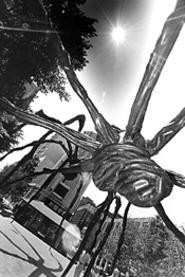 In 1982, Robert Mapplethorpe wanted to photograph sculptor Louise Bourgeois. She was uneasy. He took pictures of nude men with big penises and rock-hard hindquarters; she was a 70-year-old mother and widow. So Bourgeois brought to his studio her latex sculpture of a two-foot erect phallus. "Fillette" (1968) was the ideal icebreaker: The meeting resulted in a photo that solidified Bourgeois's reputation as art's naughty old lady.

In it she wears no makeup, a coat that resembles a black shag rug, and a confident smirk. The rubber penis is tucked under her arm, like a lap dog, with her hand wrapped around its head. Testicles bulge behind her elbow. But it's no wonder she had balls: The Museum of Modern Art was then hosting a retrospective exhibition of her work -- the first one it had ever given to a female artist.

Today, at 90, Bourgeois and her art are more visible than ever. She has new work on view at Documenta 11, an über-exhibition of contemporary art held every five years in Germany. When the Tate Modern opened in London in 2000, a Bourgeois retrospective was its inaugural show. In 1999, the national magazine ARTnews named her one of the top 10 living artists. Museums and collectors have an insatiable appetite for her work. And now Bourgeoismania has hit Cleveland.

This summer, three of her giant bronze spiders tower over pedestrians at Star Plaza, dressing up Playhouse Square with campy horror-movie chic. Though the arachnid trio is on loan for the season, "Blind Man's Buff," a three-foot marble sculpture, is a recent addition to the Cleveland Museum of Art's permanent collection (cost: $1.3 million, a record high for her work). To celebrate the acquisition, museum curators installed Bourgeois's "Ode to My Mother" (1995), a suite of nine etchings of spiders purchased in 1999. Finally, the Contessa Gallery is offering 30 of the artist's paintings, original drawings, prints, and sculptures for sale.

Of these works, the spiders are the most spectacular. The largest, "Maman" (1999), is about 30 feet tall, weighs 12 tons, and has a sac containing 400 pounds of marble eggs. It's flanked by two smaller spiders, both called "Spider," each about 11 feet tall and weighing a ton. Their beehive-shaped bodies are supported by jagged legs that arch into the air like flying buttresses and culminate on the ground in wispy appendages. Up close, the lower legs seem like the wobbly limbs of a newborn giraffe. The spiders, with both an ethereal grace and a plutonic crudeness, represent the artist's rarely seen genteel side. They symbolize Bourgeois's mother, a tapestry weaver whom she considered her best friend and protector. The lunch crowd meandering about these sculptures often can't help but touch them.

Down the road is more sexually explicit art that visitors cannot touch. The museum's new Bourgeois sculpture depicts carefully carved biomorphic forms emerging from rough marble, much as Rodin's figures spring from raw stone. A totem-like column rises from a rugged piece of marble. Atop the column is a roughly cut phallic shape. Viewed as a whole, the base, column, and top slab suggest an erect penis (like "Fillette"). The column teems with rows of highly polished nodules that grow in size as they descend to the base, first suggesting breasts, then testicles, then half-grown phalluses. It's as if a strange, confounding metamorphosis is frozen in time. The title of the piece is a pun on the game Blind Man's Bluff, since a blind person (or sighted one) can't distinguish what the nodules really are.

The work conflates phalluses and breasts, masculine and feminine -- common motifs in Bourgeois's art. She often uses parts of the human body to discuss her fears, which also happen to be universal themes: identity, sex, death, alienation, and anxiety.

Born in a suburb of Paris in 1911, Bourgeois moved to the U.S. in 1938 when she married. She is considered one of the last living modernists and a pioneer of the postmodern aesthetic, with one foot in abstraction and the other in representation. Critics have identified her personal and intensely psychological memory-driven work as surrealist. Feminists are drawn to her ongoing narrative about the emotional and physical experience of femaleness, of being a daughter, sister, mother, wife, and lover. But Bourgeois chafes at being pigeonholed. Her work is too rich and complex, and besides, she'll deny affiliation with any dogma or discipline. She's always been a loner operating outside the mainstream. "My subject is the rawness of my emotions," she has said. "My work is a very specific fight against specific fears, one at a time."

Breasts and spiders also show up at Contessa Gallery. In the lithograph "The Bad Mother," a nude, three-headed woman has breasts engorged with milk. As breast milk drips, forming a pool on the ground, a young girl wraps her arms around Mama's legs. "Spider," a 1995 drypoint, depicts a large primordial-looking spider with swirling patterns and a gash running down its body. Contessa owner Steve Hartman calls Bourgeois "a hybrid of the classical and the conceptual artists," and adds that she's great at both. "That's why she's a darling of the art world today."