Cee-Lo breaks from the Mob in a solo quest to save hip-hop. 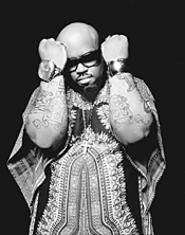 On the cover of his first solo record, Cee-Lo Green and His Perfect Imperfections, Thomas "Cee-Lo" Callaway -- flanked by a church-style pipe organ and wearing a psychedelic top hat -- looks a little like a diabolical Buddha, or maybe a shaman, putting on a funhouse magic show. Light reflects off his open hand, which beckons you to enter the temple of hip-hop. In real life, Cee-Lo believes that hip-hop is in need of some serious help -- and not of the smoke-and-mirrors variety.

"I just believe hip-hop and music in general is in despair," he says. "People want something that they can hold sacred and that is real to them and speaks to the heart of the people. All music doesn't have to convey a message all the time -- there's quality nonsense and quality irrelevance -- but I think it's time where we need something profound.

"There needs to be a revolution, and revolution is synonymous with change," he adds. "I've just come to set that in motion."

Motion has been a defining characteristic throughout the rapper's career. Most heads first heard of Cee-Lo when he blazed the chorus of OutKast's "Git Up, Git Out" on that crew's debut album, Southernplayalisticadillacmuzik, in 1994. But he's best known as a member of Goodie Mob, the Atlanta-based four-man outfit that, along with OutKast and others, has helped revolutionize the distinctive sound of Southern hip-hop -- the "Dirty South" style -- and prove that you needn't have a coastal claim to be heard. With both Goodie Mob and hip-hop itself at a creative crossroads, Cee-Lo decided to step out on his own. He approached Cee-Lo Green and his Perfect Imperfections as a challenge to himself and the musical community.

"I'm kind of discontent with the state of hip-hop right now, and I'm not challenged by it at all," he says. "I do hope that it is inspiring for the hip-hop audience, who are my peers, to see me branching out into some uncharted territory and trying to be an addition to hip-hop -- and to lengthen the life span. Hip-hop as it is today is becoming too monotonous."

Listeners who've gotten used to the one-note flavor of commercial rap may be wary of Perfect Imperfections' stylistic hodgepodge. Though it might initially feel like a complete departure from Goodie Mob's music, careful listens reveal the disc to be a thoughtful exploration of blues, soul, and gospel -- all styles that helped to lay the foundation for creative rap crews, including the Mob. The album melds Cee-Lo's raspy raps with singing that has its roots in the church.

"My mother and father were ministers, so I'm greatly influenced by gospel," he says. "I believe gospel, in its praise and joyful noise, is empowering; it's positive energy. Gospel is the origin of all music. Even when you're singing the blues, it's all the same thing."

Growing up in a home in southwest Atlanta headed by his God-fearing great-grandmother, grandmother, and mother (his father passed away when he was a toddler), Cee-Lo had to sneak his exposure to secular music. Mom was none too pleased when, as a young boy, he wanted to buy Mötley Crüe's Shout at the Devil. She forbade "the devil's work" in her home. He often had to creep into the living room late at night to take a peek at some of his favorite videos, including Peter Gabriel's racy "Shock the Monkey."

Encouraged early on by a musically inclined aunt, Cee-Lo became a singer and aspiring MC while still a teenager. Things began to coalesce when he attended a local alternative high school where André Benjamin, a.k.a. Dré from OutKast, was also enrolled. The two began to collaborate musically and continued to do so after graduation. At one point, Cee-Lo was set to become the third member of OutKast; when that didn't pan out, he hooked up with three area hip-hop heads -- Khujo, T-Mo, and Big Gipp -- and formed Goodie Mob.

Soon after, OutKast and Goodie Mob aligned themselves with the Organized Noize production team and began to record tracks in a basement studio known as the Dungeon. Along the way, the two groups generated a regional buzz for creating articulate, bumping, socially aware rap. By the mid-'90s, that buzz had spread nationwide. In 1994, OutKast's Southernplayalisticadillacmuzik put Atlanta on the rap map; Goodie Mob followed in 1995 with Soul Food. A critical hit if only a modest commercial success, Soul Food established the Mob as one of hip-hop's most promising outfits. The group soon compromised this momentum, however, with its critically panned follow-up, World Party. With tracks like "Get Rich to This," the release reflected a materialism that the Mob had always railed against.

"I believe we failed morally with that album. I was ashamed of that album," Cee-Lo says. "We suffered from temporary insanity, like, even when we were doing it. I was just like 'We are going to disappoint a lot of people with this album, dude. It's definitely not progression -- it's regression.' I opted not to argue, because I was more or less the odd man out, as far as that was concerned. Nobody saw it like that at the time."

Despite the giant World Party misstep, Cee-Lo says that Goodie Mob is still intact, though "in all honesty, this is a trying time." The Mob regrouped last year to record tracks for the Dungeon Family release, which featured OutKast and other Southern artists in a kind of supergroup setting. For the most part, though, the Mob members are in separate corners, at least for the moment. Big Gipp is working on a solo album of his own while Cee-Lo tours in support of Perfect Imperfection.

"[The album] is one of those things that I had to do alone. I'll bring it to the table, and I'll share it with the family," he says. "I feel like I'm the caveman out there, killing the deer and bringing it back to the cave. I don't feel like I'm upstaging or outshining anyone."

With a solo project that dares to be different, it will be interesting to see if Cee-Lo can help resuscitate a genre that's gasping for air. He certainly feels an obligation to do so.

"I would have been putting a nail in the coffin by coming out and doing the exact same thing as what's going on when I know I can make a difference -- and when people, as well, know that I can."