As The Story proves, we should've been paying attention to Brandi Carlile years ago. 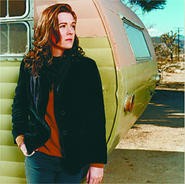 "Nobody wants to hear perfection, because nobody's perfect," declares Brandi Carlile over the phone, lying on her lawn in Ravensdale, Washington, just outside the Starbucks capital. "It's something I've learned playing live shows. People want you to fuck up."

The country-fried singer-songwriter, who's as obsessed with the Grand Ole Opry as she is Elton John, is taking a brief break from her current tour, VH1's You Oughta Know concert series.

Here's the thing: You should've known about Brandi Carlile two years ago, when she released her self-titled debut. But for Johnny-come-latelies, Carlile just released her sophomore effort, 13 tracks that document the past 10 years of her life. Rightly called The Story, the album was recorded (imperfections abounding) on two-inch tape with the help of producer T Bone Burnett.

"The truth is, I felt really self-conscious in the studio with T Bone," admits Carlile, recalling how Burnett robbed her and the Twins (her band and co-songwriters, Tim and Phil Hanseroth) of their familiar touring instruments and forced them to record with unfamiliar gear. "That's not really a bad thing, when those songs and performing those songs have to constantly challenge me."

In other words, the album's not perfect. It's the product of recording mostly live to tape. Not every chord was hit. Not every note was hit. Carlile's voice famously cracks and then breaks when she sings, "All of these lines across my face," lyrics from the titular track.

When it's pointed out that Ben Harper's just-released Lifeline was also recorded on tape, taking seven days to record 11 tracks, while she took 11 to record 13, Carlile quickly responds, "We were taking it slow," and laughs. "I thought it was going to take less time than that."

On the first day, they hit the studio at 10 p.m. By two in the morning, they had laid down two complete tracks. "We were like, 'Wow, this is only going to take us three days.'" In the middle of the 11 days, though, they all decided to drive out to Whistler, British Columbia, for a break, which means Harper and his band's much-lauded accomplishment isn't so impressive.

Also interesting is how the songs that make up The Story were held back from Carlile's initial EP releases as well as her debut, thanks to some advice from Rick Rubin, who had wanted to sign her and the Twins to his American Recordings label before Columbia beat him to the punch.

Ultimately, he, like Carlile, knew it was better to wait to record such momentous songs. "I'm protective of my songs -- what they say to me, what they mean to me," says Carlile, explaining her decision to release a debut that she knew wasn't her best work. "So I just didn't want to record them [before we were ready], because once you record a song, it's essentially gone. You're letting go. You can't add or take away from it."

Although Carlile refers to what she records as "my songs," most are co-written with the Twins. The Hanseroth brothers were in the Fighting Machinists, a Seattle rock band that Carlile followed. When the Machinists dissolved, the three struck up a working relationship, which has since mutated into a musical family that can speak as one. As with the original Alice Cooper band, "Brandi Carlile" is not just a singer-songwriter who produces country pop that -- thanks to her raw, emotive voice -- transcends conventional, sometimes even mediocre lyrics to become something powerful. "Brandi Carlile" is a band, and the Twins are -- in a crazy, post-nuclear-family kind of way -- its flesh and blood.

"We're like soul mates, and we're best friends. That's just the way it is," she says. "I'm lying on the grass right now, and they're out cleaning the garage.

"[When you have siblings] growing up, they're sort of there," she continues. "You don't get sick of them. You don't get tired of them. They're just a fixture of your life, and that's what the Twins are like to me. We just never get tired of each other, and there's really nothing we can't handle -- I don't think."

This explains why The Story's title track, a song Carlile sings with such autobiographical earnestness, was actually written by Phil. "Who better to interpret a song about me than Phil?" she counters. "Phil's a part of my life."

The Twins are part of the story, just like the rest of Carlile's family, which seems cemented together by bluegrass and honky-tonk music: One grandmother, two grandfathers, and a mother all lived the sound. In fact, Carlile is a fourth-generation country singer, even if she's still marketed as a pop artist.

There was a while, during Carlile's teenage years, when she rebelled against her heritage and turned to Brit-pop, particularly Elton John, who she thought "was really edgy" (she laughs at this now). But no matter how she tried to avoid it, "It just came back to me in this way that made me realize it's a little less about what you love and what you want than who you are," she says. "I know I have that thing my mother has, that my grandfather had."

And that's the story behind how The Story came to be the album that (rather than Carlile's debut) introduced her to the world. "The Story is going to be the album I'm terrified of following up," she says, laughing. "Me and the Twins have been writing a lot lately -- writing songs that are very exciting to us. [But] I think in some ways I'm afraid, because I'm really proud of The Story. I don't regret a single note on that record."