Joel Schumacher's version of a theater classic gets a tragic ending of its own.

December 22, 2004
comment
The Phantom of the Opera Now playing 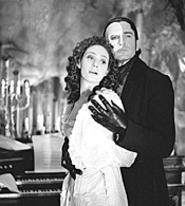 By all accounts, the only living creatures who've never taken in a stage production of The Phantom of the Opera are Osama bin Laden and Uncle Elmer's deaf hound dog, Bart -- which means that everyone else on the planet has an opinion about how Joel Schumacher's zillion-dollar movie version of the enduring Andrew Lloyd Webber hit should look and how it should play. Here are a couple of news flashes. An inveterate tinkerer, Lloyd Webber has added one new (but not entirely necessary) song, "Learn to Be Lonely," to the proceedings. And when that famous chandelier crashes into the orchestra pit, it makes a colossal splash and dazzle: The movie's made-to-order, over-the-top hunk of steel and crystal was 17 feet high and weighed more than two tons.

But then, wretched excess is this screen Phantom's strong suit. In most other ways, it's a major disappointment -- an ear-splitting extravaganza that gallops from one clanging, lavishly costumed set piece to the next without paying heed to such niceties as character development, visual logic, or dramatic pacing. The editing is so bad that you feel as if you're watching a dozen movies at once. Director Schumacher, who's done his best work with intimate, offbeat dramas, such as Falling Down and The Client, has never before tackled a musical, and it shows: He seems here to have been seduced by scale and completely baffled by the logistics of, say, getting two dozen heavily powdered, ornately bewigged Parisian dancers into the frame and out again without its looking like a cross-dressed prison riot. The unhappy spectacle is brought even lower by some godawful, rock-flavored caterwauling from Scotsman Gerard Butler, who provides a Phantom every bit as uncharismatic as he is unmusical. Just a guess, but it's likely that Lon Chaney could have made a gamer stab at "The Point of No Return" -- even though Chaney's deathless 1925 interpretation of Gaston Leroux's tragic antihero was silent.

Instead of the former Mrs. Lloyd Webber, Sarah Brightman, who first played the troubled object of the Phantom's affections onstage 18 years ago, we get 19-year-old Emmy Rossum (Sean Penn's slain daughter in Mystic River), who started taking voice lessons at the Metropolitan Opera when she was seven and has developed into an ethereal soprano. She essays Lloyd Webber's chestnuts with grace and verve. But as a character, Rossum's rising understudy, Christine, is as strange as Butler's tepid cellar-dweller.

Butler, whose movie-monster credits already include a Dracula (for Wes Craven) and an Attila the Hun, is so inert and unmagnetic that you may find yourself rooting for Goody Two-Shoes. You know, the Count of Chagny. Passably dashing and reasonably adept at swordplay, but just a little dull. As played by Patrick Wilson (a star of TV's Angels in America), Christine's other boyfriend is nothing if not movie-star handsome, and by the time he and Scarface get to duking it out in the dungeon underneath the opera house, the wise viewer will give the points and go with the Forces of Light.