In My Mind (Star Trak/Interscope) 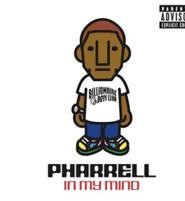 It's only fitting that Pharrell Williams has finally jettisoned collaboration for a solo career. The hallmark of his six-year chart reign as half of the superproducer team the Neptunes has always been reduction, stripping down urban music to its essence. That genius remains on In My Mind -- most definitively on the single "Can I Have It Like That." A generically hot-blooded rhyme and a pointless Gwen Stefani cameo are redeemed by a single musical element -- an acoustic bass line that writhes as ominously as a rattlesnake -- and the whole thing gets over like crazy.

Unfortunately, Pharrell's skillful, skeletal soul and hip-hop now give you too clear a view of the man behind the music. His intention to supplant Justin Timberlake as the 21st-century Michael Jackson is obvious, and during inspired moments -- such as "Number One," the perhaps-inevitable duet with Kanye West, or the ethereal R&B of "Our Father" -- Pharrell can be convincing. Over an entire album, however, neither his wispy falsetto nor his Westian, backpack-meets-bling verses carry enough charge to make In My Mind the Thriller it aspires to be.