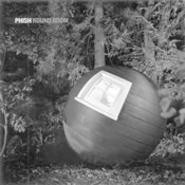 The hiatus is over. The world is safe for trampoline high jinks and glowstick wars. The mighty Phish, once burned out and rudderless, has returned. And what's a rejuvenated jam band to do but jam hard for a winding, bending 78 minutes?

The 12 expansive songs on Round Room, the band's ninth studio release, erupted from an impromptu recording session in October at singer-guitarist Trey Anastasio's converted barn in Vermont. The record is Phish's loosest affair in over a decade, suggesting the time away from one another gave the foursome the peace of mind it craved. While Anastasio and lyricist Tom Marshall write well-rounded songs -- and frankly, have written better ones than these -- the musicians' need to explore and create as organic a groove as possible often usurps mere song structure, so that a countryish ditty like "Pebbles and Marbles" becomes a 12-minute exercise in the intensity of ebb and flow and improvisational riffing. There's less pop (none of the great "Down With Disease," "Heavy Things" brevity) and more drama. Same goes with the deliberate "Walls of the Cave," which initially features Page McConnell's lonely classical piano, builds into a pretty "Year of the Cat" facsimile, and then plows its way through five minutes of white-boy funk.

Phish originally intended to debut these songs live and release the soundboard recording, something exemplified by these glorified demos. The energy and enthusiasm are unmistakable and signal a return to Phish's essential mission -- to find harmony and purpose in rock and roll, a spirit that's been lacking in recent years. Rock has needed Phish, and now it has Phish once again.