Invincible loads up on underdog clichés and scores anyway. 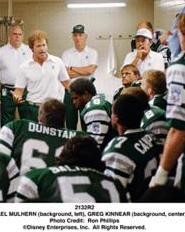 Low, which is to say no, expectations can be a wonderful thing; expect nothing, and maybe you'll get that little outta-nowhere sumpin'-sumpin' that turns an otherwise unfulfilling occurrence into a vaguely rewarding experience. It's not like Invincible boasts the most promising of credentials: a first-time filmmaker (Ericson Core, the cinematographer on the impossible-to-watch Daredevil); a first-time screenwriter (Brad Gann); a script, based on a true story, which more or less mimics Rudy's underdog-to-top-dog storyline; Mark Wahlberg in a Boogie Nights (or Rock Star) wig; and Greg Kinnear as the as-if Dick Vermeil. That this-really-happened shtick has become the kiss of death for most recent sports stories (Remember the Titans, Glory Road). And getting a release in the middle of August is like getting dumped on Southwest flights between Toledo and Fort Wayne.

True, Invincible is full of those moments during which you would normally smirk, shrug, and haul ass out into the bright sunlight without one glance back at the multiplex. It's constructed upon the clichés of the real-life-via-Hollywood sports movie, in which the unknown solider becomes the People's Champion, if only for a down or a quarter or a single game. But Invincible is also conscious of its formula, so much so that it plays more like a heartfelt homage to convention than to the man at its center, former Philadelphia Eagles special-teams player Vince Papale. It's earnest, thoughtful, charming -- it's sincere, which goes a long way.

It has to, because Invincible harbors no surprises as it tells the tale of Papale (Wahlberg), a 30-year-old part-time Philadelphia barkeep who played high school ball for one year, none in college, and still wound up an Eagle in 1976. That's when desperate team owner Leonard Tose (Michael Nouri) allowed damned near every out-of-shape male in the Philadelphia area to try out for the team, which had become a laughingstock. Tose's much-maligned publicity stunt yielded him a three-season player in Papale, who remains the oldest rookie ever to start in the National Football League.

The best sports movies eschew the clichés -- or mock them, as Ron Shelton did in the cynical fairy tale Bull Durham; or blindside and cripple them, as Ted Kotcheff did in his snarling adaptation of Peter Gent's North Dallas Forty; or beat them to death, as Martin Scorsese did in Raging Bull. These films are all about the allegorical carnage wrought on the playing-field-turned-battlefield -- the emotional victory that gives way to the spiritual defeat and, perhaps, moral redemption.

But Invincible -- like Rocky or Hoosiers or Breaking Away or the small number of satisfying sports movies in which the Little Guy towers and triumphs -- is having none of that; no metaphors here, only "real life" stuff that's so dusted off and polished, it feels utterly phony. There's no excusing those flaws, the moments that tug at the heartstrings with the conviction of screenwriting software -- the you-can-do-it-kid speeches, the do-it-for-us-buddy plaints, the hangdog-in-the-headlights scenes, the unrequited love scenes between Vince and the pretty new bartender from New York (The 40-Year-Old Virgin's freaky Elizabeth Banks). And yet Core and Gann push past all that to extract from the clichés the larger, better story of a guy who has nothing to lose but the dignity beaten out of him by pro-ballers who want the guy dragged from the field on a stretcher.

Papale keeps with him a note from his wife, who walked out on him in the film's earliest moments; her final words -- You'll never amount to anything -- serve as his inspiration, as other Eagles teammates chide and deride the wannabe. He expects to be cut every day, and one of the better scenes involves his waiting for the knock on the door that will send him to Vermeil's office for the inevitable adios. Wahlberg, the would-be action star (The Italian Job, Planet of the Apes) who has better success playing invisible men who want to be seen (Boogie Nights, I  Huckabees), fills in the blanks left by the screenplay; he looks as hollow and desperate as Gann wants him to be heroic and defiant. (Kinnear, alas, just looks like Kinnear in a bad wig; his Vermeil could be any Pee-Wee League coach with a soft spot for a hard case.)

Emblematic of how the movie works when it shouldn't is a scene that takes place in a muddy patch of turf in Papale's row-house neighborhood. It's pouring, he's just had his ass handed to him by Tom Landry's Dallas Cowboys during his preseason debut, and his boys feel as if Vince has abandoned them for fame and glory. So Vince strips down to his Eagles T-shirt and strides, in the pounding rain, onto the field, surrounded by chain link and illuminated only by lightning flashes and car headlights. The music, a classic-rock soundtrack that morphs into an orchestral wail, begins to swell; the men, now covered in mud and unrecognizable, begin to roar. You want to giggle at this ham-fisted display, but just can't; it's a Hail Mary, a desperate act that turns the nonbeliever's incredulous gasp into the fan's approving cheer.