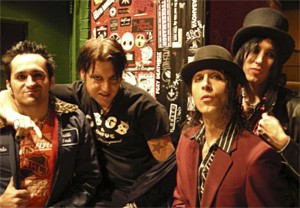 Here's a little Cleveland-Pittsburgh rivalry to keep you sated throughout football season. And probably until the season after, too — you gotta get your licks in while you can, you know? It's a garage-rock street brawl: Cleveland's Streetdevils vs. the Iron City's CosmoSonics, self-described as "early Cheap Trick meets Buckcherry, recommend for fans of: New York Dolls, Hanoi Rocks, '70s Aerosmith, the Wildhearts, Ramones, and Faster Pussycat." The last time they played town, their van was broken into, so please consider them pre-victimized. Just show up and make some noise. But make more for the Streetdevils, of course.