P.J. McIntyre's Irish aura is a step-dance ahead 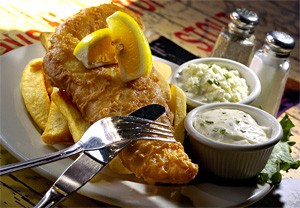 The suds are sloshing, the music's thrumming, and the roar of the crowd bellied up to the bar could hardly be more boisterous. Aye, 'tis just another Thursday night at P. J. McIntyre's, the handsome Irish pub that opened in September in Kamm's Corners, near the Rocky River border.

One part bar, one part casual eatery, and one part music venue, the spot is a joint project of longtime Cleveland developer Tom Leneghan and his cousin, professional Irish step-dancer Patrick Campbell. (Campbell's dance studio, incidentally, is right upstairs.) Together, the cousins have created a warm, welcoming space, chock-full of art and artifact and anchored, in true pub fashion, by an enormous oval bar, where we've settled in on this busy Thursday.

Among the 20-or-so offerings on tap, we count Smithwick's, Harp, and Boddington's, along with Hoegaarden, Blue Moon, and Dortmunder Gold. A frosty pint of Stella Artois ($4) proves just the thing for wetting a weary whistle. A Guinness ($4.50), however, is sort of a letdown. Clearly not the product of the fabled two-part pour, it arrives at the table streaming bubbles, its flaccid head cascading over the rim.

Still, nothing works up a thirst like a zesty mess of deep-fried wings, shellacked with chef Tim Sammon's homemade barbecue sauce, a sweet and tangy slather piqued with Bushmills Irish Whiskey. We've had bigger wings, sure — but these little guys excel in taste and texture. On the side, long, crisp celery sticks and a tub of ranch dressing add a fitting touch.

While moderate in size, the menu covers all the pub-fare basics. That includes such bar noshes as provolone sticks and chicken tenders, and sandwiches, including corned beef, a burger, and a buffalo chicken wrap. Also on the list are nine mostly homey entrées, including cedar-planked salmon, a New York strip steak, fish & chips, bangers & mash, and an all-day Irish breakfast of eggs, imported rashers (bacon) and sausage, black and white puddings, grilled tomatoes, baked beans, and toast. Worth noting, too, is the kids' menu, which offers such tot-pleasers as chicken tenders, mini-burgers, grilled cheese, and macaroni, all priced at $3.95.

For us, after those tangy wings, an ample serving of homemade lobster bisque goes down smooth and sweet. And other than the need for some tableside salting, an earthy cream of mushroom soup (today's special offering) proves almost equally pleasing.

But there's not enough salt in the ocean, we suspect, to wake up the drowsy shepherd's pie, a blandly seasoned stew of ground beef, peas, and carrots, bound by a brown sauce based on Bisto, a starchy thickener that Campbell imports from Ireland. Just as dull is the pouf of thin, underseasoned mashed potatoes, slumped in the center of the bowl.

On another visit, those watery spuds show up again, paired with three grilled bangers — ultra-tender Irish sausages made with ground pork, bread crumbs, and fragrant spices. The bangers are just right, but for anyone hoping to make new friends this night, the spuds — now overdosed on garlic — could be the kiss of death.

No complaints about the fish & chips, though, which features a large filet of frozen but well-handled beer-battered cod and thickly cut fries. Same for the umami-packed Paddy's Burger, an eight-ounce Black Angus beef patty topped with bacon, Irish cheddar, Irish whiskey barbecue sauce, and a couple of onion rings, and served on a plump kaiser roll. Equally praiseworthy: The burger arrives thoroughly cooked, and the fries, while frozen, are properly crisp and greaseless.

But if the food is basic stuff, the same can't be said for P. J. McIntyre's meticulous decor, rife with Irish imports and examples of local craftsmanship. While the 150-seat space, a former appliance store, is basically just a long, tall shoebox, the cousins have done a remarkable job of transforming it into a cozy showcase, complete with a gilded tin ceiling, a soaring stone fireplace, stained-glass windows, handcrafted floor tiles, custom glass doors, and a charmingly mismatched assemblage of tables and chairs — everything from booths, banquettes, and Guinness-barrel high-tops to stocky stools pulled up next to the fire. The result is a spot that feels both tidy and well-aged, as if the decor had developed over decades and not merely been assembled during 14 months of construction.

Still, quiet types should beware: If you think the joint is jammin' on a weeknight, just wait until Friday or Saturday, when the live music launches around 9:30 p.m. "Sure, people get up and dance," says the amiable Campbell. And if the mood strikes him, he and his students may start stepping out too.

"I wanted a place that was fun, where everyone would feel at home," he says. And if the happy crowds are any measure, the man has accomplished just that.