José González takes it easy — just don't get him started on the haters. 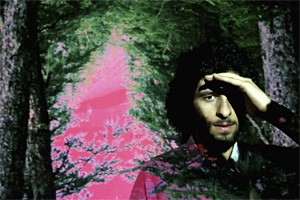 As soft-spoken, modest, and polite as he is, it's hard to believe that José González gets mad.

But he does. "I get angry when people hate and kill," says the 29-year-old singer-songwriter, who lives in Sweden. "It's like being a kid and being like, 'Why can't people just get along?' That sort of naive, almost primitive anger. I think about war and the stupid side of humans and about religion — and sometimes that really gets me going."

Likewise, González's recently released second album, In Our Nature, sounds beautiful, simple, and quiet — at least on the surface. Its 10 songs, most of which clock in at less than three minutes, are fashioned around González's airy lilt (which recalls Nick Drake's) and nylon-string finger-picking and strumming, which mix and match vintage American folk, Spanish flamenco, and plucky bossa nova. Except for "The Nest" (which is buoyed by a Gaelic organ melody), In Our Nature relies entirely on the squeak of González's fingers as they travel across the fretboard, the distant tap of his foot, and the barely audible shifts of his body. It's an effect that's ultimately ethereal, serene, and seductive.

Yet inside nearly every track lurks lyrical unease, tension, and, yes, anger. In the opener, "How Low," González sings, "Absorbed in your ill hustling, you're feeding a monster/Invasion after invasion, this means war/Someday you'll be up to your knees in the shit you seed." It's not hard to figure out who and what he's talking about. "Abram," meanwhile, takes a swipe at religion: "Not much of what you say makes any sense/Cook up some myths, then ask for obedience/You've aided delusion and created bias in our minds."

"It's a deliberate move, using a gentle sound with lyrics that can be slightly aggressive or urgent," says González. "I've always liked that, aesthetically — when you mix different emotions and allow them to crash together."

Unlike Veneer — González's highly introspective debut album, which was released in the U.S. in 2005 — In Our Nature rarely steps away from sociopolitical commentary to look inward. "Down the Line," however, cryptically hints at "Problems down the line/I know that I'm right/I see darkness down the line/I know it's hard to fight."

González is coy about any personal turmoil fans may read in the song. "Actually, some of the meanings have changed a bit since I started talking about them," he laughs. "For a while there, I forgot what I was thinking about when I wrote some of the lyrics. I'd been playing ["Down the Line"] live quite a lot before I recorded it, and I'd been changing the lyrics. Sometimes I realize the songs mean something different [now].

"To some extent, they've changed depending on how people perceive the song," he continues. "Many of my lyrics aren't that specific in what they are about, so when people look at them as meaning different things, that really affects me. I can see them fitting into different scenarios than maybe the one I was vaguely thinking about when I wrote them."

Given the soft tones of In Our Nature, González's musical background comes as a surprise: He spent several years playing bass in hardcore punk bands around his native Gothenburg.

It was a detour of sorts for González, whose parents fled Argentina's political unrest for Sweden in the late '70s and who learned how to play guitar and write songs by immersing himself in the Beatles and Andrés Segovia songbooks when he was in his early teens.

González returned to his muted roots after he went to college and studied biochemistry (he quit to pursue music, just a year or so short of a doctorate). He soon began crafting the delicate songs that formed Veneer and collaborating with U.K. trip-hop combo Zero 7. He also developed a reputation for filling his live sets with some oddball covers — including stripped-down versions of Kylie Minogue's "Hand on Your Heart" and "Heartbeats" by Swedish synth-poppers the Knife.

And while he still plays in the indie-rock band Junip (whose repertoire is decidedly louder than his solo material — but that's not saying much), González insists he has no plans to introduce any sort of musical clamor to his own records anytime soon. "In the studio, I've played around with making noisier, distorted stuff," he says, "but it's really more for fun."

González says he also won't unleash any anguished wails or screams when he performs shows — even if he sometimes feels some deep-seated ire welling up inside. "I like the expression of angriness, but I think in general I'm optimistic," he says. "I like niceness."