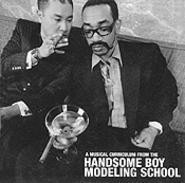 Good hip-hop really hasn't died at the end of the '90s, it's just reshuffled and ended up somewhere a little north of the underground. Let the suburban kids and mainstream playas have their No Limit army and ruff-ryding flavors of the month; the real movement, bubbling beneath the surface of try-too-hard rappers and connect-the-dots producers, is a cut-and-paste union straight outta the old school. This ethos cuts to the art of the sound montage, noise sculptures shaped and formed and animated from external resources.

Conventional hip-hoppers rarely aspire to that point anymore, settling instead for the easy beats. The cotillion of old-school stylists thrives, however, in prime work like DJ Shadow's Endtroducing . . . and even the Beastie Boys' Hello Nasty. Many of these renegades lend their hands, microphones, and turntable skills to the Handsome Boy Modeling School's So . . . How's Your Girl?, a summit meeting of sorts for these old-school educators. Handsome Boy Modeling School itself consists of Dr. Octagon's Dan the Automator and Prince Paul (the aural architect behind De La Soul's collage classic 3 Feet High and Rising), but the guest list is just as integral to the project. Cibo Matto's Miho Hatori, the Beasties' Mike D, DJ Shadow, and members of De La Soul, among others (including long-lost Father Guido Sarducci), all check in with memorable spots.

Yet it's the impulsive and frenetic spins of the Modeling School's founders that drive So . . . How's Your Girl? Dropping dialogue from Chris Elliot's late, lamented Get a Life TV show and elevated classical arias (as well as Van McCoy disco samples) into the mix, Dan the Automator and Prince Paul construct their initial collaboration as kitchen-sink hip-hop. They investigate widely -- and sometimes not too successfully -- but the enthusiasm behind such tracks as "Rock 'n' Roll (Could Never Hip-Hop Like This)" sears. So . . . How's Your Girl? jumps from metaphysical musings to comedic interplay lifted from various sources; it's at once lofty and sophomoric. And when DJs Shadow and Quest hook up with the leaders on the twisting "Holy Calamity (Bear Witness II)," it's a slab of cutting hip-hop so frantic you can practically hear the vinyl being violated. -- Michael Gallucci

Fans of Pere Ubu, Cleveland's greatest cult band, which had to relocate to New York to get its due, may be familiar with the psychodrama and dysfunction that have always hobbled its career: The band has recorded for numerous labels and in at least a half-dozen configurations, some arguably better than others. Apocalypse Now documents an exuberant performance by one of the best Ubu lineups in a largely acoustic recording from a 1991 Chicago club date. Grab this while you can. Who knows when it will disappear from the racks?

While Thirsty Ear Records has reissued some of Ubu's catalog, The Tenement Year, Cloudland, Worlds in Collision, and The Story of My Life are still out of print, so the best place to gauge how well Ubu approached pop is this impish disc featuring the Worlds in Collision band. Driven by the classic Ubu rhythm section of drummer R. Scott Krauss and bassist Tony Maimone, it also features brilliant keyboard interloper Eric Drew Feldman, longtime guitarist Jim Jones, and vocalist/writer David Thomas, the group's conniving, brilliant Svengali. Quirky and moving in that unique Ubu way, it's also full-bodied and, largely because of Feldman, accessible -- even hummable.

Five of the thirteen tracks, marked by a heartrending take on the obscure, beautiful "Wine Dark Sparks," stem from the Worlds in Collision sessions. The rest cover very old material like the early single "Heaven," Dub Housing's Cubist sea chantey "Caligari's Mirror," and the unforgiving "Non-Alignment Pact," from Ubu's great The Modern Dance.

Thomas's voice is an acquired taste, as is his egocentric sense of humor. But both shine on Apocalypse Now, especially during a cool "My Theory of Spontaneous Simultude" (in which Thomas, masquerading in surrealist soulman drag, humorously aggrandizes himself at the willing expense of his band) and "We Have the Technology," one of the more wishful cuts from The Tenement Year.

I saw The Tenement Year Ubu in a fantastic New York club performance about eleven years ago. Both band and club were so hot, Thomas turned absolutely liquid and fell on his ass, still singing. Jones picked him up off the floor, Thomas resumed his bearish, funky steps, and the band never missed a beat. The Apocalypse Now show, recorded in late 1991 at Shuba's, Chicago, isn't quite as electric as that one was. But it's similarly heartfelt, hellbent for leather, and eccentric. Completist fans of Ubu will get it anyhow. Those who always felt Ubu was too weird to accept (this would include the greater population of Cleveland and its radio stations) should check this out to hear what they missed: One of the definitively "alternative" bands at one of the heights of its powers. -- Carlo Wolff

The sort of music with which Arto Lindsay is most readily associated is the "speaker shredding" noise produced by the avant rock group DNA. But Lindsay's also a noted performer of Brazilian music. In fact, he was raised in Brazil and, as a teenager, witnessed the birth of the Tropicalia movement, which challenged the military dictatorship there and included artists such as Caetano Veloso, Os Mutantes, Gilberto Gil, and Tom Ze.

The music on Pride is a hybrid of rock and Brazilian music, but the Brazilian element is stronger. Some of the lyrics of Lindsay's tunes are in Portuguese, and Brazilian rhythms can be heard throughout. Pride is a quiet album, but not as quiet as his previous effort, The Subtle Body. Here he brings in electronic effects created by guitarist Davi Moraes and keyboardist/programmer Melvin Gibbs.

Lindsay's lyrics are often deliberately mysterious and provocative. In "Resemblances," he sings, "Your face slips away from your expression/Your expression unmoored from your mouth." Lindsay also employs spoken-word techniques in an unusual way in "Prefeelings," a song on which the rapper Beans provides a counterpoint to Lindsay's singing. While Lindsay's melodies are fresh and attractive, his singing isn't so great. His understated vocal work, à la Chet Baker and Joao Gilberto, lacks textural and dynamic resonance. He sounds better in Portuguese than English, demonstrating what an advantage singing in that beautiful language can be. -- Harvey Pekar