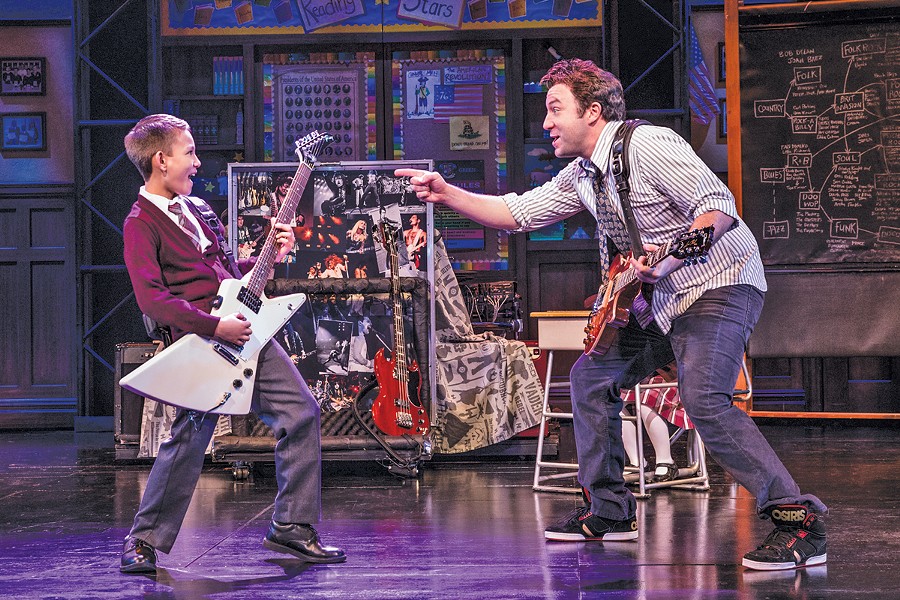 In the age of remakes and revamps, when it feels as if almost every new production is a recycling of an old work, you hardly ever hear that the new production has outperformed its source material. The nationally touring Broadway musical School of Rock, now at Playhouse Square, makes a strong case though.

Written by Mike White and starring Jack Black, the School of Rock movie was released in 2003. The story follows Dewey Finn, a guitarist and singer who lives and breathes rock and roll. When Dewey is kicked out of his own band, he finds himself struggling to pay his share of the rent. Hoping to make some fast cash, he takes on the identity of his unknowing roommate and pretends to be a substitute teacher at a prestigious private school. After finding out that his students are classical music prodigies, he turns his fifth-grade class into rock stars, hoping that together, they will win the upcoming Battle of the Bands competition.

The plot of the movie and the 2015 musical are the same, but there are an extra 12 rocking songs added to the latter's score, courtesy of Andrew Lloyd Webber, with lyrics by Glenn Slater.

These supplementary songs are just one of a few additional elements that make director Laurence Connor's musical surpass its film origins. The live element of the theater works wonders for School of Rock's story, translating its messages to the audience in the way that a picture on a screen simply cannot.

This musical exudes absolute energy that is palpable throughout the theater. And the cast delivers heartfelt themes with an authenticity that is both exhilarating and refreshing.

Dewey is contrasted against Rosalie Mullins, the strict principal. These two appear to be polar opposites, with Dewey shirking all responsibilities while Rosalie is burdened by too many. Likewise, he's contrasted against his roommates, his best friend and former rocker Ned, played by Layne Roate, and Ned's controlling girlfriend Patty, played by Madison Micucci, who are all bogged down by adulthood.

Understudy Alison Cusano played Rosalie on opening night, and her voice beautifully contrasts, yet compliments, the rock numbers. Her exquisite ballad, "Where Did the Rock Go?" is a recognition of the necessity of taking time in your adult life to have fun.

From the second he begins strutting along to his opening song, "When I Climb to the Top of Mount Rock," to the moment he skips off stage after curtain call, Trainor radiates energy.

Dressed in plaid skirts or gray slacks with maroon-colored tops by designer Anna Louizos, Dewey's 13 students begin the show as prim and proper 10- and 11-year-olds, the most proper of which is Summer, played by the wonderful Sami Bray. Summer represents the overachiever who puts too much weight on grades.

In fact, most of the prep school children are facing pressures from their parents. One of the most powerful songs of the night is "If Only You Would Listen," where all of the students sing their little hearts out to the audience as they express how they wish their parents would listen to them.

Just like the characters they are playing, the child actors are certainly above average. They execute JoAnn M. Hunter's choreography with ease and have an obviously great rapport with Trainor.

Most impressively, the children play their own instruments, and they do so incredibly well under musical director Martyn Axe. This includes Mystic Inscho as Zack the guitarist, Leanne Parks as Katie the bassist, Julian Brescia as keyboardist Lawrence, and Cameron Trueblood on drums as Freddy. Backup singers Schonelle and Marcy are played by Arianna Pereira and Gabriella Uhl, respectively. Rounding out the incredible singers is Camille de la Cruz as Tomika.

The set design by Louizos consists of walls that fly in and out, such as paneled, schoolhouse hallways, poster-clad classroom walls and the messy room from which Dewey might find himself soon evicted. While the set's heavy use of the fly system was supposed to make the transitions from scene to scene appear seamless — and it mostly succeeded — technical difficulties resulted in a major mishap on press night when a set piece would not retract and the show was stopped briefly.

Natasha Katz' lighting design functioned perfectly, so well so that during the Battle of the Bands competition, the lighting made you question whether you were at the theater or a concert.

The kids on stage are living for those moments where they stomp up and down singing "Stick It to the Man." They are thriving when playing and dancing to rock and roll. In fact, they appear to love everything about performing in this show. And this love for performing we witness on stage is a first-class example of the major theme behind School of Rock. Exposure to music, exploring artistic expression and having someone listen to what you have to say can make all the difference in a child's life.