Playmate of the Month 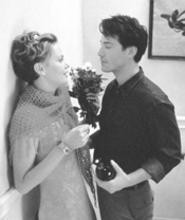 Sara is quirky and free-spirited. That, at least, is the premise of the hilariously wretched new weepie Sweet November, of which Sara, embodied by the breathtaking Charlize Theron, is the heroine. But if you're smart enough to run in terror at the threat of a movie character who's quirky and free-spirited, have no fear: The evidence offered of said quirkdom and unfetteredness is pretty thin. Roughly, it's this: She likes dogs. She lives in a cute apartment decorated with little Buddha statues. She's friends with the drag queens downstairs. She prefers romping on the beach to slaving away in the workaday world. And she lives in San Francisco!

How exactly does one go about creating an off-the-wall romantic heroine whose antics don't, in this day and age, seem pitifully tame? Even back in 1972, Barbra Streisand drove Ryan O'Neal nutty in Peter Bogdanovich's What's Up, Doc? with behavior that seems sociopathic compared to Sara's. Of course, we're not talking screwball comedy here. Sweet November is serious drama, buster. The story concerns Sara's relationship with Nelson, a driven, hotshot advertising man who has a snazzy apartment and a snazzier girlfriend and snappy clothes and a rotten friend/business partner à la Richard Gere in Pretty Woman. After a goofy episode or two, Sara proposes to Nelson that he move in with her for a relationship lasting one calendar month, during which time he gets to sleep with her -- and let her run his life -- and after which they'll part with no hard feelings.

Sara has had this sort of relationship before -- she offers to let Nelson "be my November." She flatly states that he should agree to this because he needs her; she alone is a spirit blithe enough to save him from the corporate world that is killing his soul and all that. After some initial resistance, Nelson agrees. In the course of the month, however, he learns her secret agenda -- and this is in the trailers and TV ads, so no whining, please, that it's a "spoiler": She's sick, Ali McGraw-style, and her unconventional love life is her way of avoiding ever getting so close to anyone that they'll see her die.

The ineptitude of the movie -- and there's plenty of it -- arises mostly from Kurt Voelker's script, which may just have the worst romantic dialogue in a big-studio movie since 1999's Simply Irresistible. The hilarity is provided by Keanu Reeves, god bless him, who plays Nelson. The film rises to the level of premium camp at least three times, and it's Reeves who gets it there each time.

The first is the scene in which Nelson presents a hyper-Freudian campaign proposal to the honchos of a hot dog company. Reeves struggles so hard to strut that it adds another unintentional layer of overcompensation-for-inadequacy to this already funny sequence. In another jaw-dropper, he crashes Sara's Thanksgiving dinner in a Santa suit, bearing a sack of gifts, having thoughtfully realized that, in light of her condition, she should probably enjoy a holiday two-fer. And nobody could give the line "My third eye didn't open" -- Nelson to Sara after a montage-romp -- quite as sidesplitting a reading as Reeves does.

Director Pat O'Connor, of the overrated 1994 Irish romantic comedy Circle of Friends, handles the material smoothly enough, and the gifted cinematographer Ed Lachman, of Erin Brockovich and The Virgin Suicides, aces the undemanding duty of making Theron and the Bay Area look great. Jason Isaacs, the villain in The Patriot, does what he can as one of the drag queens, and Greg Germann, a riot as the skunky Richard Fish on Ally McBeal, is left floundering with nothing funny to say as Nelson's creepy crony.

Then there's Liam Aiken as the neglected kid whom Nelson befriends from across the street (Nelson arranges a radio-controlled submarine, complete with sonar bleeps, to take out the kid's competition in a toy-sailboat race). Presenting Nelson at a father-son day, the kid says: "We do stuff together, and it's fun, 'cause he makes me feel smart." No doubt. But while it's easy -- and appropriate -- to mock Keanu Reeves, he gets the last laugh, because no matter how you slice it, he's a star. He always has been. In no way does this contradict the popular opinion that he's a bad actor. His effective turns in Dangerous Liaisons, Speed, and Sam Raimi's recent The Gift notwithstanding, he's a terrible actor. Even at his best, he gives the impression of a man trying to think through molasses, and in Sweet November, he is not at his best. But the movie would be unwatchable without him. He's far more truly a movie star than Charlize Theron, who not only is one of the most astonishing movie beauties in years, she can really act. Yet somehow she isn't fascinating on screen the way a true star is -- the way that Reeves is, even if that fascination is of the train-wreck variety.

Indeed, it could be said that Reeves is one of the great manifestations of the mysteriousness of stardom. He gives the worst performance in Sweet November, and he's the best thing about it.