There is nothing hypothetical about it: This Theory is sound. 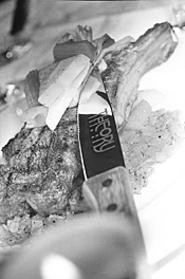 Warning: A critical and unbiased review of an excellent restaurant could be an exercise in brevity. In the case of Theory, business partners Doug Petkovic and Gretchen Hyland's young restaurant in Tremont, it might go something like this: "While the astringent arugula salad will appeal primarily to those who enjoy sucking on lemons, everything else is fab. Make reservations immediately."

Editors, however, tend to insist upon more detail. So I will happily oblige.

For diners who have clear memories of the former Mojo, gliding into the totally reimagined and redecorated space that is Theory may be disorienting. Gone is the industrial-chic minimalism of the dark, edgy "small plates" restaurant. In its stead, guests will find a salon as warm, earthy, and comfortable as any on the map, filled with all the trappings of Arts & Crafts-style decor -- quarter-sawn oak, mica-shaded lamps, leaded glass, and the like -- but well short of the point at which the ambiance feels contrived or theatrical.

Co-owner and longtime restaurateur Doug Petkovic is part of the Hospitality Restaurants group, which also owns Salmon Dave's, Blue Point Grille, and the Cabin Club. But Theory is Petkovic's personal project, and as an intimate, chef-driven, boutique restaurant, it's a highly successful reflection of his vision.

Remarkably, that vision's execution has already weathered its share of challenges. Petkovic originally tapped Steve Fillis -- former executive chef at Jean-Georges Vongerichten's Mercer Kitchen, in SoHo -- to take charge of the restaurant's fare, and together Fillis and Petkovic developed a tightly structured menu of intensely composed contemporary dishes, with an emphasis on beef. When Fillis left the restaurant shortly after its opening, former Classics sous chef Goran Zekic stepped up to the plate, never missing a beat in handling the original menu and working successfully with Petkovic to develop the fall bill of fare, which is now in place. (For this reason, though, some of the dishes we raved about during our mid-October visits may no longer be available.) And when Zekic, in turn, stepped down, seasoned chef Tim Bando, who had been stirring things up as Theory's bartender, took over the kitchen.

Still, with Petkovic as a constant, there is ample reason to believe that the new regime will be a worthy successor to the old and that the menu will continue to tango in that small, restricted space where the trendy intersects the familiar. After all, consider the remarkable red-wine-braised lamb shank, an evening's special that is certainly worthy of a berth on the late-autumn menu. So slowly and thoroughly was it simmered that we never even glanced in the direction of our steak knives, so masterfully seasoned that we never considered adding salt, and so smartly matched with surprisingly sweet rutabaga purée and sleek navy beans that we had to be restrained from licking the plate. The dish was entirely homey, yet undeniably arousing from first bite to last. The same painstaking preparation marked another special, too -- pearly, pan-seared grouper, lightly coated with white sesame seeds and served with braised carrot, cauliflower, and celery root on a plate edged in flavor-wisps of curry and red pepper.

Beef dishes -- the house specialty -- range from the meticulously straightforward to the deliciously novel. In the first category, there was a reasonably sized, bone-in Black Angus rib steak, precisely grilled to order and topped with "flavors of celery," including ivory-colored triangles of vaguely fennel-like celery root, and celadon crescents of bittersweet celery stalks. On the side, a savory "eggless béarnaise" of sautéed shallots, tarragon, lemon juice, and celery seed added a note of palate-cleansing brightness.

At the other end of the familiarity spectrum were the two thick, rosy-red slices of oven-roasted beef tenderloin, turning in a clever impersonation of sushi in their dark green "wrappers" of dried black trumpet mushrooms (in place of nori) -- a counterpoint that lent the sweetish beef a spectacular, mouthwatering salinity. A bed of wasabi-green coulis turned out to be mild leek purée, and a scattering of roasted trumpet mushrooms and scallions provided a final earthy tweak.

Then there was the prodigious American Kobe beef burger, settled on the bottom slab of a bun and topped with crumbled Maytag blue cheese and a "salad" of baby lettuces, roasted red pepper, and cubes of wild mushroom. Knife-and-fork food (and forget about the ketchup!), this is undoubtedly one of the best gourmet burgers in the city. Our teeth slid through the beef as if it were foie gras, and each bite was drenched in beefy, buttery flavor.

(Both the burger and the tenderloin were served with pommes frites, delivered in a small terra-cotta flowerpot; greaseless, crisp, and lightly salted, these slender little fingers of deep-fried potato are to French fries what that Kobe beef burger was to a tongue sandwich. And all meals are accompanied by sturdy, rustic rolls from local artisan Zoss, the Swiss Baker.)

But it was the starters that proved most arresting: the golden pan-roasted crab cake on a bed of grapefruit, red cabbage, cilantro, and ginger "slaw;" the satiny cream of cauliflower soup; and especially a tuna "sushi" salad, served in a hollowed-out lemon shell. If the components of this particular dish -- tiny cubes of raw tuna, roasted corn kernels, finely chopped hazelnuts, bits of miniature haricot verts, raisins, and short, slender ditalini, lightly dressed in lemon juice, lemon oil, and olive oil -- sound like an odd ensemble, the chorus of clean, fresh flavors and well-balanced textures that arose from it was proof that the whole can be more than the sum of its parts.

Freshly made desserts are executed with equal panache. Out-of-the-ordinary offerings ranged from the pleasantly tart berry brûlée (a toss of blueberries and strawberries, gently blended with a bit of honey-sweetened sour cream and the unexpected fillip of fresh basil and freshly ground pepper, then snuggled beneath a melted sugar crust) to the indulgent taste of a silken, but astonishingly light, chocolate-peanut-butter crisp, topped with a spoonful of whipped heavy cream, a slender tuille, and a pair of skinny chocolate "antennae." ("What a Reese's peanut-butter cup wants to be," quipped Bando.)

Service is equally detail-oriented. On both visits, knowledgeable waitresses were quick with insightful wine descriptions and recommendations, drawn from the concise, mostly West Coast wine list. (As expected from a spot that specializes in beef, the wine list is weighted heavily toward big reds, at prices ranging from $24 to $190 per bottle.) The servers were equally well informed about the food and the preparations (although sometimes moved by their own enthusiasm to provide more detail than was necessary), and even on a busy Saturday evening, a leisurely three-course meal took scarcely more than 90 minutes, thanks to their sensitive pacing.

In light of all this goodness, then, perhaps you are still wondering about that spartan arugula salad, topped with thinly sliced onion and mushroom and thick curls of aged Parmesan cheese, and scantily clad in what tasted like mere drops of lemon juice. Perhaps it was intended as a palate cleanser -- in which case it would have been more appropriately served after the meat, in the continental fashion. Or perhaps its creator thought the cheese would act as a needed emollient to the greens -- which it did not. Instead, brutally brash and ultimately boring, the salad was a single, strange miscalculation in a meal that was otherwise nearly flawless.

But what can one expect? In theory, nothing is perfect. But in Theory, they come surprisingly close.