System of a Down and Slipknot make differently motivated but eminently compatible tourmates. 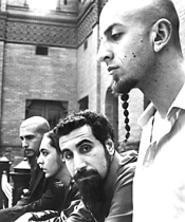 "Right now, it's nice to head up a tour called Pledge of Allegiance," says Slipknot drummer Joey Jordison. "It's weird how it all fit together. This is the tour to see right now to get some aggression out."

Indeed. These bands not only have released two of the season's most eagerly awaited hard rock albums, they've also unleashed two of the most brutal recordings to come out of the nu-metal school. "People call us a metal band," sighs System guitarist Daron Malakian, "even though there's a whole bunch of other stuff going in and out of the music."

Such are the travails of modern hard rock. Try to do something different, and you're still dragged into the gutter. "It's very physical," Jordison says of Slipknot's music, "and the relationship between the band and audience is the most important thing."

Which explains why both bands, not exactly MTV or radio regulars, debuted near the top of the charts with their sophomore albums. In System's case, Toxicity entered at No. 1, although a snafu at SoundScan, the industry record-selling gauge, erroneously gave the week to Alicia Keys. The mistake was corrected a day later. Not that it mattered much. Toxicity had the unfortunate distinction of being released September 4; its sales numbers were released eight days later. Needless to say, no one felt much like celebrating the good news 24 hours after the terrorist attacks.

"It was definitely less exciting," Malakian says. "If nothing was going on, we probably would have had a party or something. But since that happened, we weren't even thinking about a No. 1 record. We were too busy wondering what was going to happen to the world."

As a quartet of Los Angeles-based Armenian Americans (Malakian is joined by singer Serj Tankian, bassist Shavo Odadjian, and drummer John Dolmayan), System's political stance -- government-sponsored genocide and national prison conditions are just two of the issues the band takes on -- is as self-consciously powerful as its music. "We've never considered ourselves a political band," Malakian explains. "People just see us that way. We give our political and social opinions, but we're not stuck to just politics, just as our music's not just stuck to metal."

No one will confuse Slipknot's message -- mostly a big middle finger to anybody and everybody -- with such heady matters. "People = Shit" is just one of the representative ditties on its new album, Iowa, which is named after the nine-member group's home state. "We make hard-hitting, traditional metal," Jordison says. "That's what distinguishes us from the current crop of mainstream metal bands -- the TRL metal bands. That's why we're making our music more brutal, to tear ourselves away from that whole nu-metal scene."

So how did one of modern metal's smartest bands get paired with one of its dumbest?

"I was a bit worried at first, too," Malakian laughs. "Our management basically put this tour together, and we thought it would be a good idea to go out to arenas instead of playing clubs. We wanted to extend our audience. It's cool, because we're both aggressive bands, even though we do it different ways. It brings some spice into the whole thing."

"It just felt right," Jordison adds, explaining that the two bands met during an Ozzfest stint a couple of years ago and immediately hit it off. And they appear to be rubbing off on each other a bit, too. Toxicity includes "A.T.W.A.," a song influenced by, of all things, '60s madman Charles Manson's beliefs.

"It's just something I'm interested in," Malakian, who wrote the song, explains. "The past four years, I've been into reading up on Charles Manson. I wrote a song about how I feel about the whole thing. Murder wasn't basically the whole agenda. There's no justification of murder, but that's not what interests me about this whole thing. The murder part isn't what attracts me to Charles Manson. It's all the other stuff. I end up agreeing with him on a lot of things. And I'm not afraid to say it. You can go on for hours and hours debating this, but there are opinions shaped by the media. What I'm doing is showing the other side of the bug-eyed serial killer. People should see the other side and then make an opinion on it."

Similarly, Slipknot is venturing into System's territory. Iowa's closing title track is 14 minutes of single-riff droning that acts like a salve on the results of the previous hour's ceaseless aggression. "I wrote that song on guitar while watching Bugs Bunny, actually," Jordison laughs. "It's so pummeling, and it takes you all the way down. People thought we would end the album on a high note, but we preferred to take it down where it is."

Jordison continually stresses the band's musical integrity. Behind each member's self-designed mask (the members, by the way, prefer to be identified by number rather than name; for the record, Jordison is 1) is an artist who's quite serious about the cathartic release of his music.

"A kid can't dive into the music when he's at a show like he can when he's by himself, with the headphones on and the lights out," Jordison says. "Records have a bigger type of effect. I sit in my hotel room and listen to music all day long. It makes me happy. Live shows are a more cathartic thing. You're watching the band, it's really loud, you're yelling at your friends, you're checking out chicks. It's more of a brutal experience, and you're not necessarily paying attention to all the music. The best thing about listening to records at home is that there are no distractions, and you can really get into the music."

Right now, in the middle of the Pledge of Allegiance tour, both bands are thinking of the future. It took three years for System to follow up its muddy-sounding self-titled debut, and Malakian, who had a big part in co-producing Toxicity with Rick Rubin, hopes the wait isn't as long for the third album. "We believe in taking our time and putting out something that we feel is quality," he says. "There are things we can grow on. Right now I'm thinking of the next step. [A couple of years ago,] if you asked me how our next record was going to sound, I couldn't tell you, because I still had a few years of living to do. I need to see what comes my way and what to write about and what to think about. I'm still trying to find new music and stuff to be influenced by. But I can easily say that it's still going to sound like System, no matter what we do. When we play together, it just comes out that way."

Jordison, however, is more definite about Slipknot's outlook. "This band is too extreme and too physical," he says. "I see only two more albums for us. It's too big already. It's so important to me and the rest of the guys, I don't want to make a parody out of it, like a lot of bands do with themselves. It wouldn't be Slipknot if we took off the masks. We're not going to change what you see right now for anybody.

"It's like the Sex Pistols," he concludes somewhat incongruously. "They were there for a little bit, it was special, and that was it. Now they're legends. That's how we want it. So, honor us while we're here, man; we're not going to be around forever."The fact that System of a Down and Slipknot decided to call their ear-bleeding, co-headlining tour Pledge of Allegiance is mere coincidence. It was named weeks before the September 11 tragedy, but has since taken on a completely different meaning. Not surprisingly, that's not lost on the tour's participants.