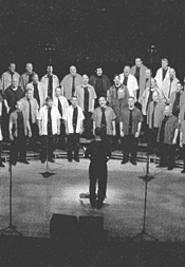 Leave it to the North Coast Men's Chorus to make the holidays merry and gay. In their Nutcracker adaptation Sugar Plum Fairies, 18 guys pirouette in tights and tulle. "One guy is going to actually dance en pointe, and they're putting these boys in tutus!" says Steve Louzos, a baritone in the all-gay chorus.

The concert comes on the heels of the chorus's first CD, Behold!, a compilation of the group's holiday concerts from the past two years. "We're not just a bunch of guys standing on risers," says chorus director Rich Cole. "We want people to leave with a smile." Sugar Plum Fairies is at 8 p.m. Saturday and 3 p.m. Sunday at Cleveland State University's Waetjen Auditorium, 2001 Euclid Avenue. Tickets are $15 and $20, available by calling 216-556-0590 -- Cris Glaser

Gills Around the Green
Vince and Amy celebrate.

Vince Gill and Amy Grant have been making beautiful music together, both on- and offstage, since they said "I do" three years ago. You can enjoy the onstage parts at their third annual holiday show, Simply Christmas With Amy Grant and Vince Gill, on Friday. Accompanied by the Nashville Chamber Orchestra, the couple warbles Christmas favorites from the combined five holiday discs they've released since 1983, as well as a few non-seasonal tunes. Before Gill and Grant take the stage, comedian Henry Cho warms up the audience with his trademark quips about growing up a Korean American in the foothills of eastern Tennessee. The show starts at 7:30 p.m. at the CSU Convocation Center, 2000 Prospect Avenue. Tickets range from $25.50 to $76; call 216-687-9292. -- Cris Glaser

In 1979, a drunk Elvis Costello said some pretty mean things about Ray Charles to singer Bonnie Bramlett at a Columbus bar. So Bramlett punched him in the face. That pretty much sums up the rock veteran (who, with husband Delaney, once led a musical troupe that included Eric Clapton, George Harrison, John Lennon, and Gram Parsons): She's one tough broad, with a spiritual lineage that goes back to classic R&B. She still makes records, and she's still a helluva singer. Bramlett performs at the Medina Performing Arts Center (777 East Union Street in Medina) at 9:30 p.m. Friday. Tickets are $25, available by calling 330-864-7673. -- Michael Gallucci