Poisoned by Purina: The case of the alpaca massacre 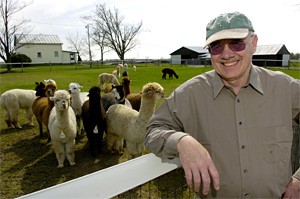 Magical Farms sits on 1,000 acres in Litchfield, a place so quiet you can hear the wind smack against the branches of naked trees far off on the horizon.

The googly eyes of 1,600 alpacas peer curiously from a maze of pens, where mothers feed their young and mammoth males with names like Powder Keg and Pulitzer anxiously wait to breed. They are mythical-looking creatures, shrouded in clouds of brown, white, and caramel fur that's as warm as wool and as soft as cashmere. These are the Rolls-Royces of livestock, worth anywhere from $20,000 to $1 million apiece.

Owner Jerry Forstner started buying alpacas in 1993 after reading a story describing them as a solid and easy investment. Their valuable fleece is shaved once or twice a year and then sold to textile manufacturers for sweaters, hats, and blankets.

Forstner, who founded Lube Stop and a mini-storage company, already had a giant horse farm. He began importing alpacas from deep within the Andes ranges of Peru. After two years, Forstner fell in love with their serene demeanor. He sold off his horses, bought more land, and hired the former operations manager of the Cleveland Metroparks Zoo, Diane Pekarek, to oversee his farm, now the largest in North America. "They are such shy, curious animals," says Pekarek, as one gently gnaws grass from her hand. "It's so cool to finally gain their trust."

But things weren't always so peaceful and prosperous here.

That hazy morning in 2003 felt as calm as any other. But as the farmhands arrived and extinguished their cigarettes, it was clear that something was terribly wrong.

Across the fields, a dozen alpacas lay dead. More screamed in pain, blood dropping from their eyes, legs collapsing. The final death toll reached 120. Another 300 were left with damaged kidneys and hearts. "It was the worst day of my whole life, and I'm an old fart," Forstner says. "We were carting dead bodies out of the field, one after the other. It was more than most normal people can bear."

Forstner contacted experts at Ohio State, who conducted necropsies. It turned out that the feed they'd been eating, purchased from the Purina Mills plant in Massillon, had been dosed with salinomycin — a chemical used to kill parasites in pigs and chickens, but which is deadly to alpacas.

Forstner called Purina Mills headquarters in Minneapolis to relay the news. He also phoned other alpaca farms across Ohio, but it was too late. Their animals were dying too.

It took Purina Mills almost a week to get back to Forstner. The company sent out its own expert, who analyzed the feed and confirmed OSU's results. "He also agreed that it was the feed that killed [them]," Forstner says. "After that, we never heard from him again."

For the next six months, Forstner tried his best to get the company to compensate him for his ravaged herd. He estimated his losses at $12 million. "I was hoping they'd be good corporate citizens and take responsibility," he says. "I simply wanted them to pay for the animals we lost. But they wouldn't even return our calls." So Forstner sued.

It would prove a costly and painful endeavor — a battle that has become the Michael Clayton of the animal kingdom.

Since 1894, the company has been one of the nation's largest feed producers, until it split in 2001. Its dog- and cat-food lines were purchased by Nestlé, while its livestock division went to Land O'Lakes.

The company readily admitted to producing tainted feed. But it thought that Forstner was vastly overstating his animals' value. So began a protracted legal war that would take four years to arrive in court. Twenty-four of the dead alpacas were removed from the case on a technicality — they were owned by Forstner's wife; she would have to sue separately.

The trial didn't commence until March 2007. Since Land O'Lakes had already confessed its sins, culpability wasn't the issue. This was a fight over damages.

They painted Forstner as a greedy man trying to exploit the massacre. They pointed to instances where Forstner wanted as much as $325,000 for one alpaca, though he'd purchased it for just $18,000 five years earlier. Land O'Lakes also hired an economist who testified that the average price of Magical Farms' alpacas was around $14,000.

But the value of livestock isn't so easily distilled, says Cindy Berman, spokeswoman for the Alpaca Owners and Breeders Association. Prices are predicated on such intangibles as lineage and breeding potential. "They are like any other livestock — where prize animals can go for thousands, but everyday animals can go for just a couple hundred."

Forstner claimed his alpacas' coveted Peruvian lineages made them priceless. But the jury was unimpressed. It found Land O'Lakes guilty, but awarded Forstner only $1.6 million — not even enough to cover his legal fees. "Part of the problem was the jury's ignorance of the animals' worth," Pekarek says. "To them it was just livestock, just a bunch of animals, like cows."

Forstner has appealed, and he and his wife now await the trial for her animals, which will begin in Medina County this month.

Whatever the outcome, the sense of injustice within Pekarek won't subside anytime soon. "To watch them die the way they did — people probably figure that it's just livestock, we got our money, what are we complaining about? But that's not the point. The point is that the company poisoned these animals and didn't want to take responsibility. That's the point."