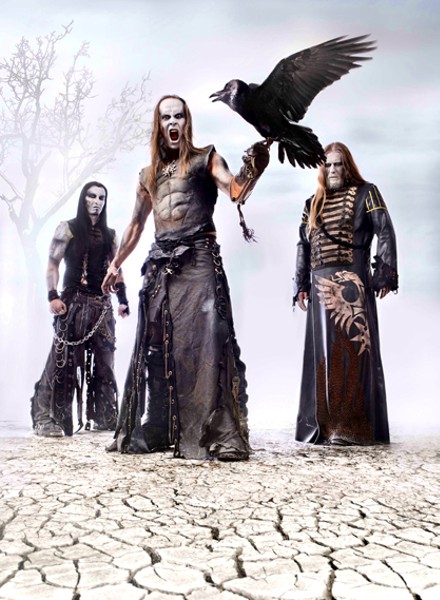 A lot of death metal is interchangeable — and that's coming from a fan of the genre. But there's no mistaking Behemoth. The Polish trio spent the last dozen years, roughly since 1999's Satanica and 2000's Thelema.6, trying to engulf the world in the sonic equivalent of a firestorm. Drummer Zbigniew Robert Prominski, a.k.a. "Inferno," plays some of the most powerful blast beats in death metal, hammering at the snare like he's firing a chain gun, as the double kick drums knock holes into your skull. Meanwhile, singer-guitarist Adam "Nergal" Darski fires off ferocious guitar riffs that trade the typical death-metal rhythmic grinding for a more anthemic, relentlessly destructive sound — he's going for overwhelming power from first note to last, and often comes closer to Psalm 69-era Ministry than, say, Cannibal Corpse.

But Darksi's vocals really get your attention. He avoids the typical extreme-metal guttural croak/bark, instead ranting and roaring like a blast furnace. It's such a distinctive, almost inhuman sound that the obvious question is what kind of effects pedal does he use to achieve it?

"What you can hear is pretty much my voice," he says. "Sometimes I just double it or triple it. That's how you get the impression that there's a few people screaming."

Darski believes there are a lot of misconceptions about Behemoth. One of the major ones is that the group made a major stylistic shift in 2000, abandoning the black metal of its first three albums in favor of a more death-metal sound. "Our style has been evolving throughout the years; every record is different," he asserts with some accuracy. "I wouldn't really say that after Thelema.6 we changed. If you listen to each one of our nine albums, each one is different. It's constant evolution."

This constant evolution is particularly surprising given that the current lineup — with Inferno on drums and Tomasz "Orion" Wróblewski on bass — has been together since 2003 (Inferno's actually been drumming for Behemoth since 1997).

"Because we've written so much music, it's more and more difficult to come up with something that's gonna be Behemoth style at the same time that it's fresh and challenging," says Darski. "We can't just get in a rehearsal room and throw ideas at each other and the song comes out. It's a much longer and more painful process."

For this reason, he has decided it's important to make each Behemoth album a statement. This means abandoning a longstanding practice of releasing EPs of B-sides, live tracks and cover songs between albums. One of these five- or six-track releases has followed every Behemoth disc since Thelema.6, and the range of covers Behemoth has essayed over the years is surprising, to say the least. They've offered their own roaring take on other extreme metal bands' work (Morbid Angel's "Day of Suffering," Mayhem's "Carnage," Venom's "Welcome to Hell"), but they've also released versions of David Bowie's "Hello Spaceboy," Nine Inch Nails' "Wish" and the Ramones' "I'm Not Jesus." But no more.

"There's gonna be no more small releases; it just makes no sense," says Darksi. "I want people to wait for another album. I want them to anticipate — to be really, really hungry for the next Behemoth opus. I don't want to distract their hunger with a small release. We will release a DVD, but that's a different story. There will be no musical release from Behemoth this year or in 2011."

Two years should be just about long enough to absorb the band's most recent album. Evangelion came out in August and topped many metal critics' year-end lists. It's not as florid or ambitious as 2004's Demigod, which featured synths simulating an orchestra and a male choir, but it contains some of the most powerful songs the band has ever written. "Alas, the Lord Is Upon Me" finds Darski combining the black-metal spirit of the band's early days with the ultra-aggressive blasting of their more recent work, while the doom-haunted "Ov Fire and the Void" is possibly the slowest song in their discography. Meanwhile, the album's epic closing track, "Lucifer," uses a poem by Polish poet Tadeusz Miciski as its lyrics.

That's a surprising gesture on Darski's part. He's tended to ignore his homeland's culture, preferring to write songs employing imagery from various ancient lands, including Babylon (Nergal, his stage name, was a Babylonian deity) and other Middle Eastern countries. But as he makes very clear, it's always metaphorical.

"We're not Nile, we're not Absu, we're not Melechesh," he says, citing other extreme metal bands who make the ancient desert tribes their primary subject matter. "We write about our lives, our perspectives, our point of view. We just wrap it up in this Biblical ancient stuff."

Part of that desire to look outside may be rooted in Behemoth's relative obscurity in Poland — which is ironic since Darski is engaged to Dorota "Doda" Rabczewska, one of Poland's biggest female pop stars.

"She's big, she's a star," he says. "We're just an extreme-metal band who happen to be recognized by a larger audience. But our music is anti-mainstream, basically. You can sell a certain amount of records, and this is it. We've sold 15,000 records in Poland, and I don't really think it's going to be easy to surpass those numbers. We can't do much better than that. But we'll see — maybe I'm wrong."